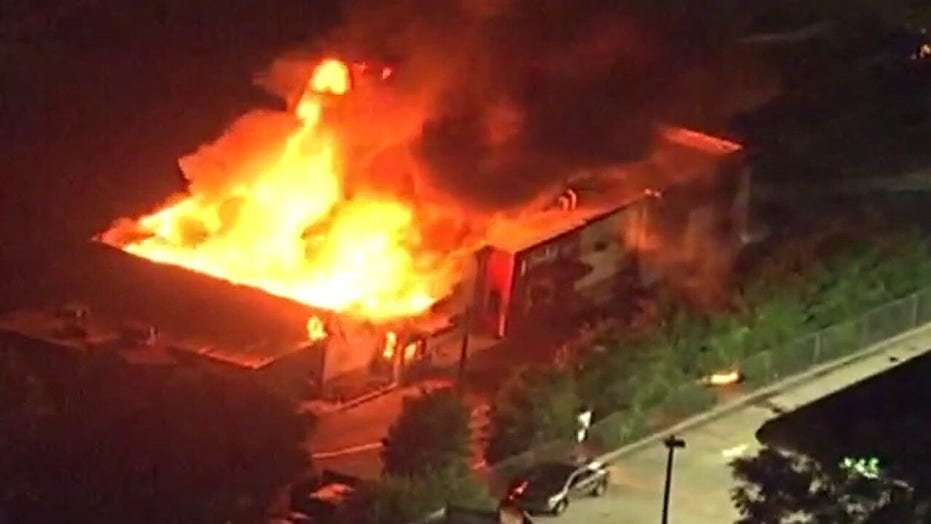 Protests and destruction erupted in Atlanta on Saturday night in response to the police-involved shooting death of a 27-year-old man outside a Wendy’s fast-food restaurant.

Television images showed the restaurant on fire around 9:30 p.m. ET as rioters filled the parking lot where Brooks was shot by police as he fled after allegedly grabbing a stun gun away from an officer during a struggle.

Smaller fires were also seen in the area Saturday night.

Nearby, protesters gathered along University Avenue, with Atlanta police blocking access ramps to Interstate 85, apparently to keep the protesters off the roadway, FOX 5 of Atlanta reported.

As the unrest continued, the Atlanta Police Department confirmed it had taken action against two police officers in connection with Brooks' death. Officer Garrett Rolfe, a veteran of more than six years with the force, was fired, and Officer Devin Brosnan, with the department since 2018, was placed on administrative duty, WSB-TV of Atlanta reported.

Earlier Saturday, Atlanta Mayor Keisha Lance Bottoms announced that police Chief Erika Shields had resigned from the top job, though the mayor said Shields would remain with the department.

“I do not believe that this was a justified use of deadly force,” Bottoms said.

Protesters had painted "Defund the police" in the street outside Atlanta police headquarters.

A protester holds up a sign on Saturday, June 13, 2020, near the Wendy's restaurant where Rayshard Brooks was shot and killed by police Friday evening following a struggle in the restaurant's drive-thru line in Atlanta. (Associated Press)

The unrest in Atlanta came as the entire nation continued to be in a state of disruption regarding police relationships with African-Americans and other minority communities following the May 25 death of George Floyd in police custody in Minneapolis.

On May 30, a group of police officers was seen on video using stun guns on a pair of young adults who were in a car that was stuck in traffic because of protests that night. Six police officers have since been charged in connection with the case.

On May 29, a city police officer was seen slamming a Marietta, Ga., woman to the ground. The woman, Amber Jackson, later underwent surgery for a broken clavicle, FOX 5 of Atlanta reported, while the officer was placed on administrative leave pending the outcome of an investigation.

The Atlanta police, meanwhile, were shaken May 30 when one of their own, Officer Maximilian Brewer, was severely injured when he was struck by an all-terrain vehicle being driven by an allegedly drunken driver.

“We ask that you keep him in your thoughts and prayers,” Mayor Bottoms said about Brewer, an 18-year veteran, according to WSB. “He has a long road to recovery.”

In the Brooks incident, police had been called late Friday about a man allegedly sleeping in a car that was blocking a Wendy’s restaurant drive-thru. The Georgia Bureau of Investigation was investigating reports that the man, later identified as Brooks, had failed a sobriety test and was shot in a struggle over the stun gun.

Stacey Abrams, the Georgia Democrat who gained national prominence running for governor in 2018, tweeted that “sleeping in a drive-thru must not end in death.”

Georgia Gov. Brian Kemp issued a statement saying the Georgia Bureau of Investigation has launched a probe of the incident that led to Brooks's death.

"I am confident GBI Director Vic Reynolds and his team will follow the facts to ensure justice is served," Kemp wrote.