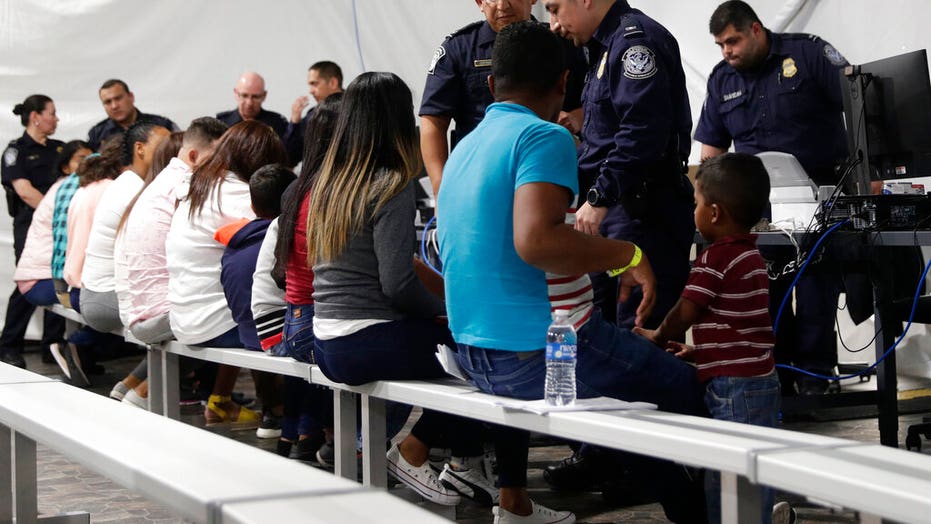 Immigration officials on Thursday began sending asylum seekers in Arizona back to Mexico as part of an expanding program that requires thousands of asylum seekers to wait for their immigration court hearings in Mexico rather than the U.S.

Until this week, the government was driving some asylum seekers from the border town of Nogales, Ariz., to El Paso, Texas, so they could be returned to Juarez, Mexico. Now, asylum seekers will have to find their own way to court hearings in Juarez, which is roughly 350 miles from Nogales.

Migrants who are applying for asylum in the United States go through a processing area at a new tent courtroom at the Migration Protection Protocols Immigration Hearing Facility, in Laredo, Texas.  (AP)

About 30 asylum seekers were sent to Nogales, Mexico, on Thursday, according to Gilda Loureiro, director of the San Juan Bosco migrant shelter in Nogales, Sonora. She said the migrants hadn't made it to the shelter yet but that it was prepared and has a capacity of about 400.

"We're going to take up to the capacity we have," she said.

Critics have said the Trump administration’s "Remain in Mexico" policy puts migrants who fled their home countries back into dangerous Mexican border towns where they face being kidnapped, robbed or extorted.

A Human Rights First report released in December documented more than 600 public reports of violence against asylum seekers returned to Mexico, including rape, kidnapping and torture. Human Rights First said that was a steep increase over October, when the group had identified 343 attacks.

Nogales is now the seventh border crossing through which U.S. authorities return migrants to Mexico to await court hearings. The policy was introduced in January 2018 in San Diego.

ASYLUM REQUESTS OVERWHELM US IMMIGRATION SYSTEM: A LOOK AT THE NUMBERS

By the end of November, more than 56,000 people had been sent back to Mexico, according to Syracuse University's Transactional Records Access Clearinghouse. Of the more than 24,000 cases that have been decided, less than 1 percent have been granted asylum or some other form of relief allowing them to stay in the U.S.

Authorities have lauded the program, saying it has helped reduce illegal border crossings. Border Patrol apprehended just over 33,000 people along the Southwest border in November, compared to a peak of 144,000 in May.

A three-judge appeals court panel heard arguments Oct. 1 in San Francisco on a lawsuit filed by the American Civil Liberties Union to block the policy. The court has yet to make a decision.