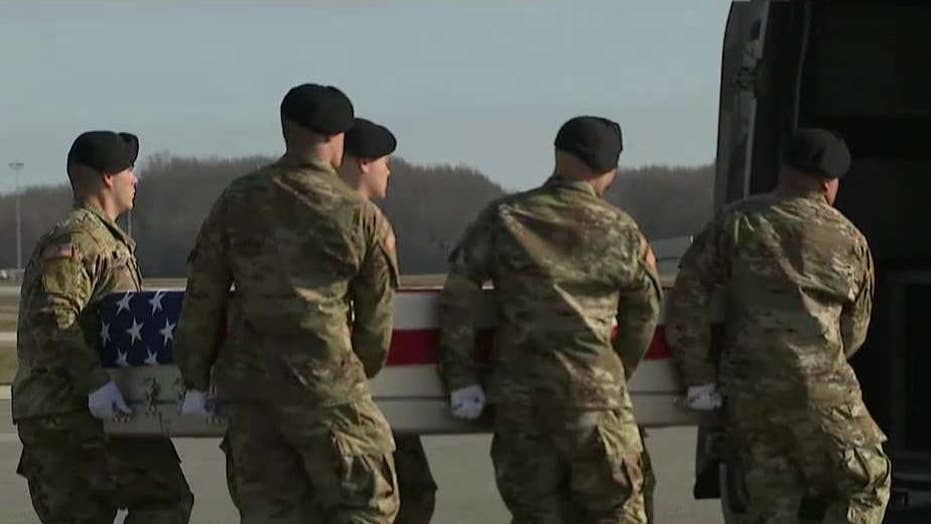 The remains of a U.S. Army Special Forces soldier killed in combat in Afghanistan earlier this week have been returned to the United States, arriving at Dover Air Force Base in Delaware on Christmas Day.

Sgt. 1st Class Michael Goble, 33, of Washington Township, N.J., was completing his final tour of duty when he was killed Monday in a roadside bombing.

A Bronze Star recipient who was in Afghanistan supporting Operation Freedom's Sentinel, Goble was assigned to 1st Battalion, 7th Special Forces Group (Airborne) at Eglin Air Force Base, Florida, according to the Pentagon.

Goble was engaged in combat operations in Afghanistan's Kunduz Province and was set to return home in less than a month, Pentagon officials said. The Taliban claimed responsibility for the attack amid ongoing peace talks with the U.S.

On Wednesday, Goble's remains were flown via aircraft to the United States.

Multiple U.S. officials, including National Security Adviser Robert O'Brien and Army Gen. Mark A. Milley, the chairman of the Joint Chiefs of Staff, were present for the dignified transfer, The Associated Press reported.

Assemblywoman Holly Schepisi, who represented Goble's hometown, wrote in a Facebook post Monday: "Today I found out Westwood and Washington Township lost another son, brother, father while fighting for the US military in Afghanistan."

She continued, "While most of us are sitting down to Christmas dinner trying not to argue about trivial things with relatives we haven't seen in a while, Michael Goble's family will be meeting his body on the tarmac as he returns 3 weeks early from his fourth and final tour of duty."

A GoFundMe account set up for Goble's girlfriend, Jennifer Albuquerque, and his daughter, Zoey, raised over $36,000 in less than 24 hours.