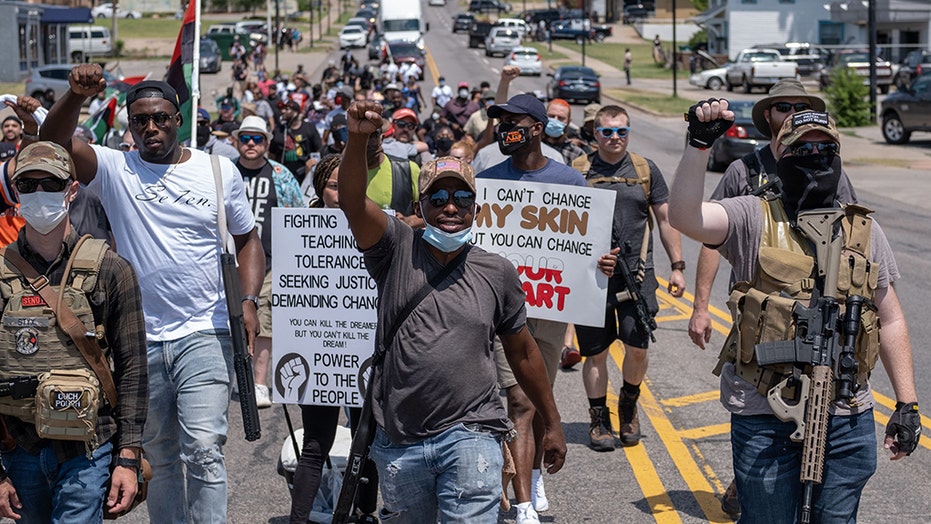 A demonstration in Oklahoma over the weekend saw hundreds of armed protesters peacefully march to the governor’s mansion to protest the police killings of black men.

Nearly 200 protesters in Oklahoma City marched from the Ralph Ellison Library to the Gov. Kevin Stitt’s mansion on Saturday, the Oklahoman reported. Stitt was not at the mansion at the time, having traveled to Tulsa for President Trump’s rally, the paper said.

The march was organized by 1000 Brothers and Sisters in Arms, a pro-Second Amendment group for people of color, the report said, adding that the march was predominantly made up of black men.

Black gun owners march to the governor's mansion in Oklahoma City on Saturday during a pro-second amendment rally on the same day that President Trump's holds his first political rally in months amid the coronavirus pandemic. (AFP via Getty Images)

Chatman, armed with an AR-15, told the crowd to “be civilized” before asking how Stitt could “live in a predominantly Black side of town but allow the police to execute us when we have our hands in the air?”

Those attending the march said the event was in response to the recent killings of black men by police.

Other speakers called for the reopening of local cases, including the death of C.J. Pettit Jr., who was killed by a Midwest City police officer in 2015, the Oklahoman reported.

Chatman and community organizer Michael Washington hand-delivered a letter to a security guard at the governor’s mansion at the march’s conclusion.

The letter stated a list of demands, which included reopening the Pettit case, state laws that hold police officers accountable for their actions, requiring officers to carry their own liability insurance and an International World Court investigation into the U.S. for violations against its black population, according to the paper.