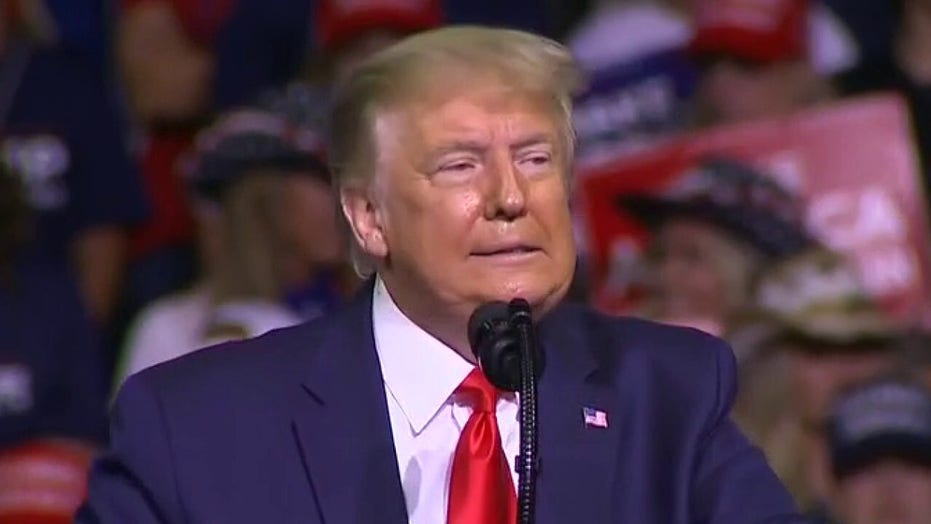 Trump: We will never kneel to our national anthem or our great American flag

President Trump roared back onto the campaign trail Saturday night with a rally before thousands of supporters in Tulsa, Okla., using the fiery and freewheeling appearance to mock Democratic foe Joe Biden, criticize those tearing down monuments to controversial historical figures and decry what he described as the “disaster” demonstration in Seattle.

The rally, his first in months, comes amid prolonged concerns about the coronavirus pandemic and a nationwide outcry over racial injustice in the wake of George Floyd's death. Before an enthusiastic and placard-waving crowd -- in an arena that still had visible empty seats despite expectations of a packed house -- Trump described his party as one of equality and justice but also hammered a "law and order" message in response to those protests that escalated into violence.

Trump specifically tore into the occupation of several blocks in Seattle by left-wing protesters, which covers an abandoned police precinct, saying it is an example of the "radical left." The occupants, whom Trump described as "anarchists," call their area the Capitol Hill Occupied Protest, or CHOP.

"We're not talking about some little place, we're talking about Seattle," Trump said, criticizing the Democratic officials in Seattle and Washington state. He said he had a standing offer that "any time you want, we'll come in" and straighten out the issues in Seattle "in an hour or less."

But, he said: "I may be wrong, but it's probably better for us to just watch that disaster."

Trump added that a congressman on the flight to the rally told him he shouldn't step in to end the CHOP occupation in order to let people see "what radical left Democrats will do to our country."

He also cited "radicals" that targeted statues of Thomas Jefferson and Christopher Columbus in recent days and said that a law should be passed that burning the American flag results in a year in jail. While touting his chances in November, Trump repeatedly used examples of protesters tearing down monuments and the Seattle CHOP zone as a foil for his “law and order” theme -- while insisting Biden, the presumptive Democratic presidential nominee, would always "cave" to such "radical" parts of his party.

“Do you want to bow before the left-wing mob or do you want to stand up tall and proud as Americans?” he asked at one point.

The rally's scathing tone, impromptu digressions and political broadsides reflected Trump slipping right back into his campaign element after the pandemic-induced hiatus. Trump also called a Boeing official a “dumb son of a b----,” in describing defense contract negotiations with the company. He said he eventually saved “like a billion six or a billion seven” in the negotiation.

Tulsa marked the president's first rally since early March, when both Trump and Biden canceled in-person campaign events as the seriousness of the coronavirus crisis began to set in. But Trump, who for months has been itching to get the country's economy back to normal and get himself back in front of supporters at his rallies, is the first to resume large in-person events.

Trump also claimed Saturday that the "silent majority is stronger than ever" and touted Republicans as the "party of Abraham Lincoln" and "law and order," in comments appearing to indicate how he will frame his reelection campaign as the November election approaches. 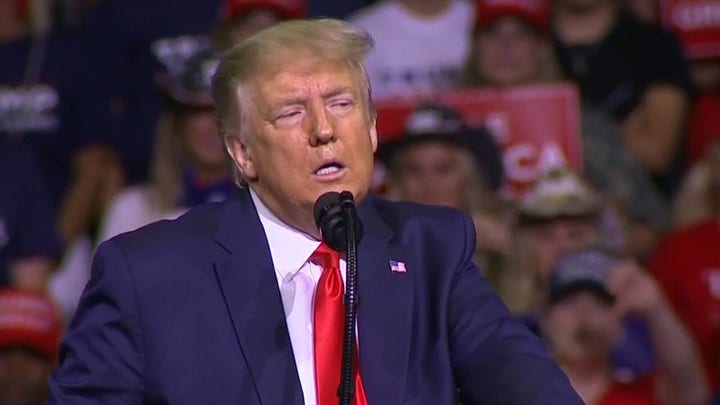 Trump made the declarations at Tulsa's BOK Center -- which itself became an epicenter of controversy amid protests outside and lingering concerns over the potential coronavirus risk of holding the rally.

In advance of the Saturday event, Trump supporters had been lining up for days to secure their seat in an arena that holds just under 20,000, and the Trump campaign touted Monday receiving over 1 million ticket requests.

Nevertheless, there were a number of empty seats on the upper levels inside. The campaign nixed plans for Trump to address an overflow crowd at the beginning. In the arena, Trump accused the media of dissuading would-be participants. Campaign manager Brad Parscale, on Twitter, said, "Radical protestors, fueled by a week of apocalyptic media coverage, interfered with @realDonaldTrump supporters at the rally."

But Rep. Alexandria Ocasio-Cortez, D-N.Y. -- a frequent Trump target during the rally -- tweeted in response that "teens on TikTok" had made "fake ticket reservations & tricked you into believing a million people wanted your white supremacist open mic enough to pack an arena during COVID."

But the rally, despite the hiatus, hit the familiar notes.

Trump early in his remarks touted reform to the U.S. Department of Veterans Affairs, the breakneck pace at which the Senate has confirmed his judicial nominees and tax cut legislation he signed into law.

Like in 2016, Trump promised that he will release a list of names he could potentially choose from for Supreme Court nominees earlier this week, and reiterated the promise Saturday night.

"Think how important it is... It's almost like we're a minority court," Trump said, referencing two rulings that went against the positions his administration took this week.

"I'll be soon announcing a new list of exceptional candidates" for the Supreme Court, he continued. "And I'll only pick from that list."

Trump said Biden could not release his own Supreme Court list because his possible nominees would be too radical. He also said that Biden would "stack" the tribunal with "extremists."

Additionally, Trump spent a significant amount of time addressing criticism he got for what appeared to be a gingerly walk down a ramp and an awkward sip from a glass of water at a West Point graduation earlier this month. Trump defended himself, alluded that Joe Biden had health issues instead of himself, then took a sip of water to loud cheers from the crowd, before tossing the water out of the glass.

"That's enough, I wanted to tell that story, does everybody understand that story?" the president concluded.

Trump also targeted China over trade concerns and the coronavirus. He said that his trade efforts helped American farmers and at one point called the coronavirus the "Kung Flu."

Trump also criticized Biden for not agreeing with his decision in the early stages of the coronavirus pandemic to close off travel from the country. "He never did anything against China, Joe Biden," Trump said.

The president, in comments on the South Lawn of the White House on Saturday, said he was excited to get back among his supporters.

"The event in Oklahoma is unbelievable," he said. "The crowds are unbelievable, they haven't seen anything like it and we will go there now, we'll give a hopefully good speech, we're gonna see a lot of great people, a lot of great friends and pretty much that's it."

With states reopening after historic economic lockdowns, the rally still raised concerns that it could be a "super spreader" event, especially as six members of the Trump reelection campaign tested positive for the coronavirus ahead of the event.

TULSA, OKLAHOMA - JUNE 20: Supporters of U.S. President Donald Trump gather to attend a campaign rally at the BOK Center, June 20, 2020 in Tulsa, Oklahoma. Trump is scheduled to hold his first political rally since the start of the coronavirus pandemic at the BOK Center on Saturday while infection rates in the state of Oklahoma continue to rise. (Photo by Win McNamee/Getty Images)

TRUMP PREPARES FOR FIRST CAMPAIGN RALLY IN MONTHS IN TULSA AMID CONCERNS ABOUT CORONAVIRUS, VIOLENCE

"Per safety protocols, campaign staff are tested for COVID-19 before events," Trump campaign Communications Director Tim Murtaugh said in a statement. "Six members of the advance team tested positive out of hundreds of tests performed, and quarantine procedures were immediately implemented. No COVID-positive staffers or anyone in immediate contact will be at today’s rally or near attendees and elected officials. As previously announced, all rally attendees are given temperature checks before going through security, at which point they are given wristbands, facemasks and hand sanitizer."

The campaign believes the staffers were infected in Dallas at the Trump event there. All six are said to be asymptomatic and the campaign is working with health authorities to contact trace the staffers who tested positive.

Biden in a Saturday evening tweet slammed Trump for holding the rally despite the coronavirus concerns -- Oklahoma has seen a recent bump in cases of the disease.

"Donald Trump is so eager to get back to his campaign rallies that he’s willing to put people at risk and violate CDC guidelines — as long as they sign a waiver promising not to hold his campaign liable. Unbelievable," Biden tweeted.

This followed the BOK Center asking the Trump campaign this week for a written plan on how it would engage in social distancing among the rally-goers. The Trump campaign appeared to dismiss the arena's concerns, making clear that the event would be an on-brand Trump rally.

"We take safety seriously, which is why we’re doing temperature checks for everyone attending, and providing masks and hand sanitizer. This will be a Trump rally, which means a big, boisterous, excited crowd," Murtaugh said in a statement.

The Saturday rally was originally scheduled for Friday, June 19. But that day is the Juneteenth holiday, which celebrates the end of slavery in the United States. Amid racial tensions over the death of George Floyd, the Trump campaign changed the date of the event to Saturday.