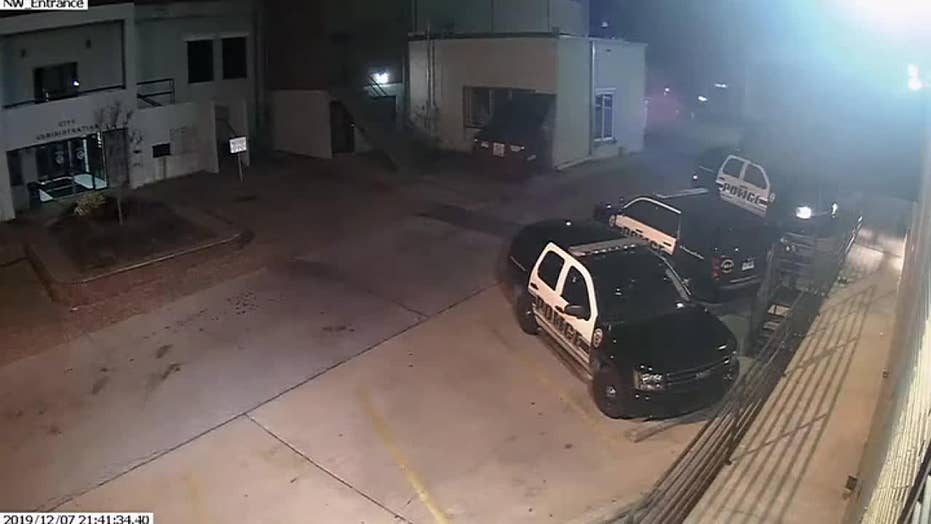 A 27-year-old Arkansas police officer who was “ambushed and executed” as he sat in his patrol car outside his headquarters earlier this month was shot 10 times in the head by a gunman who was interested in anti-law enforcement groups, investigators said.

The new details in connection to the “heinous” killing of Fayetteville Police Officer Stephen Carr were disclosed Friday as investigators released new surveillance footage that captured the gunman, identified as 35-year-old London Phillips, approaching the squad car and opening fire.

“We have hesitated to release the attached video of what transpired that night due to the heinous and shocking nature of this crime, but in an effort to keep the public informed of exactly what happened that night, we are releasing video of the incident along with the results of the Arkansas State Medical Examiner’s preliminary findings,” the Washington County Sheriff’s Office wrote in a statement.

The sheriff’s office said's been investigating the “ambush and execution” alongside the FBI, at the request of Fayetteville Police Chief Mike Reynolds.

One of the five videos showed Phillips approaching Carr's patrol vehicle from behind. It later showed him firing shots at the vehicle as he walked away and reloaded his gun. Sheriff's investigators said Phillips fired 16 rounds and had reloaded the weapon with another full magazine containing 17 rounds.

Police said Phillips shot Carr at point-blank range using a 9 mm semi-automatic handgun he bought legally in 2017. A search of Phillips’ social-media accounts showed he had an interest in anti-law enforcement groups, the sheriff’s office said without elaborating.

An autopsy determined that any of the 10 shots that hit Carr in the head would have killed him, the sheriff’s office said. The other officers shot Phillips a total of six times.

Phillips had been carrying a full box of ammunition containing 50 rounds and a second box with 32 rounds, the sheriff’s office said.

Hundreds attended Carr’s funeral this past Thursday. Pictures posted by the sheriff’s office on Facebook showed law-enforcement officers and civilians lining the streets and saluting the casket as it passed in a motorcade.

“As the police chief, I make this vow: Stephen Carr's badge number 413 will not be forgotten,” Reynold’s said during the funeral, according to KFSM-TV. “May God bless the family. God bless each and every one of you. And God bless the Fayetteville Police Department.”

The Fayetteville Police Department had hired Carr in April 2017; he was a patrol officer in the Dickson Street entertainment district. Police called him a "hero," and said he served with dedication and professionalism for over two years.