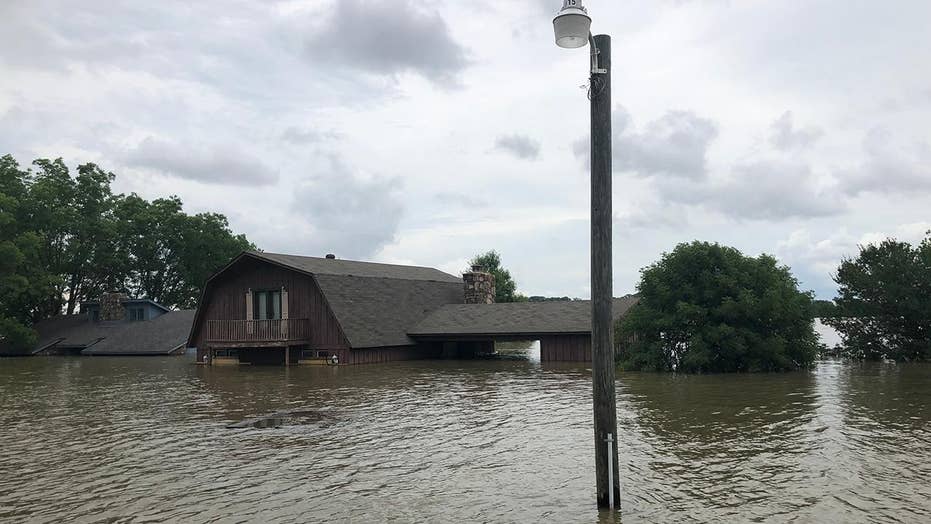 Residents in Arkansas have begun returning to their homes by boat to check on their property after historic flooding inundated communities.

PINE BLUFF, Ark. -- After historic flooding in Arkansas left communities underwater, many people and families who evacuated are finally able to make their way back by boat to assess the damage.

“This is first time I’ve been over here in a while,” Bart Moore, a retired firefighter, told Fox News. “Yeah, I see the windows are all steamed up... I opened windows and that’s not doing no good.”

Moore, who built his house with his late wife 30 years ago in Pine Bluff, said he most likely will have to start over.

“I lost my wife about a year and a half ago and we built this house,” Moore said. “Everything was like she wanted it. I’m probably [going to have to] tear it down as bad as I hate to.”

Sonny Harrison, who lives just down the street from Moore, said the flooding was worse than they could have imagined.

“I mean, we knew it was going to flood, but you can’t get ready for this if you don’t know how deep it’s going to be. I mean, in 2016 it was deep, but not like this,” Harrison said, referring to the last time Arkansas experienced significant flooding

The Arkansas river crested just shy of 51 feet on June 6 and has been receding slowly. As of June 8, the water level was about 49 feet.

Communities like Dardanelle, Fort Smith and Pine Bluff all felt heavy impacts from the rain waters that damaged or destroyed more than 850 homes across eight counties, according to a letter written by Arkansas Gov. Asa Hutchinson to President Trump requesting a presidential disaster declaration.

The flooding is estimated to cost the state over $8.5 million in debris removal and emergency protective measures for local and state government, with Hutchinson expecting additional infrastructure losses to exceed $100 million.

“We’ve had flooding in the past but not at this magnitude, not at this level,” Jefferson County Sheriff Lafayette Woods Jr. said. “It’s just devastating to have so many people displaced in these houses, and then cleanup afterwards is going to be a challenge as well. We thank God for having the assistance from the Army Corp of Engineers, the Forestry Service and the National Guard – without those assisting agencies this would not be possible.”

With the flood waters receding, neighbors have been coming together to shift their focus to rebuilding.

“I’m in the acceptance stage of what's going on now, and it's just, I mean, just got to pick up and go on from here,” Moore said.

Officials have estimated it could take months before residents could start settling back into their homes, and while the waters have been receding, the long road to recovery is just beginning.