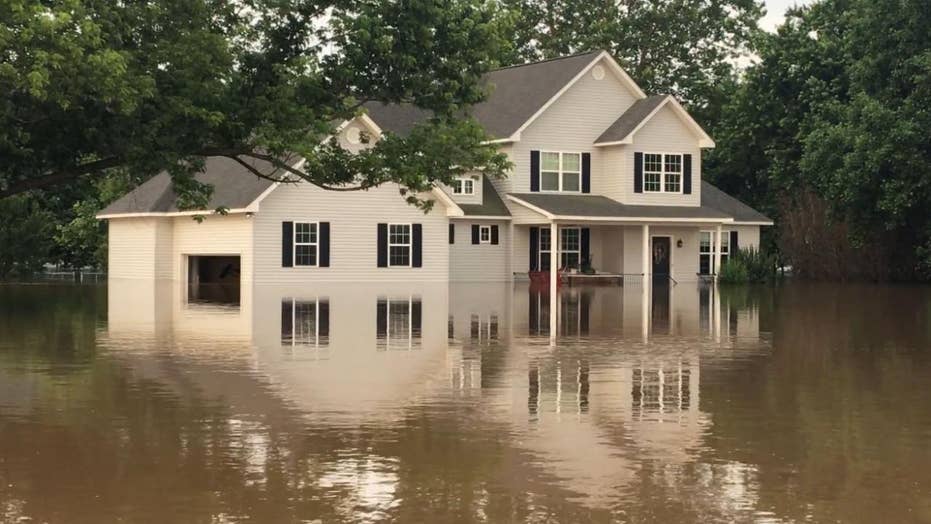 Historic flooding in Arkansas continues as the water travels south and communities around Little Rock are preparing for the Arkansas River to reach its highest level this week, and with heavy rain forecasted in the coming days, this already waterlogged region is preparing for the worst.

CONWAY, Ark. – Weeks of heavy rainfall in the Midwest have led to relentless flooding along the Arkansas River, inundating communities, tearing through levees and dams, prompting flash flood warnings and evacuations. But as the Arkansas River in Oklahoma begins to recede, the situation in Arkansas is about to worsen.

As water moves south toward Conway and the state capital of Little Rock, officials fear it could inundate an already-strained levee system. That movement, combined with a forecast of heavy rain into early next week, is the biggest concern for this already waterlogged region seeing water levels not reached since 1945.

The National Weather Service said flash flooding and thunderstorms could interfere with recovery work across the state.

The Army Corps of Engineers said that the levees in the area will be holding water for much longer than they were designed for and that they will be continuously monitoring them. The focus right now is on the Lake Conway Dam and how it will handle the amount of water rushing downstream.

Officials are concerned about transportation access as water levels are expected to rise this week. (Fox News/Allie Raffa)

More than 500 homes in Arkansas have been affected by the flooding and several bridges have been temporarily closed, stopping barge traffic and costing the state over $20 million in economic losses every day.

Arkansas Gov. Asa Hutchinson requested an emergency declaration, which President Trump approved late Thursday as flooding worsened in the state. But officials estimate they won't know the extent of the damage until the water recedes, which could take days or even weeks.

Mayflower resident Mark Harrell’s home lies on farmland about 600 yards from the Arkansas River. He now has over two inches of rising water in his house and his family’s farm in operation for over 80 years is now a lake.

“A lot of the farmers along this river valley won’t get a crop this year, just due to the high waters and how long it’ll take to go down and the timeframe which we’re running out of to get crops in the fields to ensure a harvest...it’s just unbelievable how much water we do have here,” he said. “If they have a crop planted and it gets flooded out, they get some flood insurance, but if they don’t get a crop in at all, I’m not sure how that works.”

“Everybody's got a sad story about leaving, they're leaving their homes and going back and having…nothing but water and mud,” said resident Donna Traffanstedt, who volunteered to serve displaced residents at an American Red Cross shelter.

Now, residents in Conway are preparing for the same fate as the Arkansas River is expected to crest today and could maintain its high level for days or even weeks if the Mississippi River doesn’t start to recede, allowing the Arkansas River to follow.

“Nobody would’ve ever expected this to happen…I’ve never seen the water to this magnitude since I’ve been a resident here the past 28 years,” said Faulkner County Sheriff and Conway resident Tim Ryals, trying to see the bright side in a dark situation. “This brings everybody together…you can clean slate and start from scratch and build a relationship that’s stronger than politics…and its awesome as sad as it is under the circumstances.”

Road closures throughout the state have left displaced residents unable to see how badly their homes were affected by the rising water. (Fox News/Allie Raffa)

Heavy rainfall over the past few weeks shattered all-time May records, swelling rivers to record levels in parts of Arkansas, Kansas, Missouri and Oklahoma.

So far, 10 locations have set new record river levels during this prolonged siege of heavy rain. Little Rock has seen the Arkansas River rise to its highest level since 1945 and the river could have its highest crest since 1957 in Pine Bluff, Ark., this week. While not setting records, the river is expected to crest Tuesday in Little Rock at 28 feet, which is 5 feet above flood stage.

And as the stakes rise, residents here are leaning on their faith.

“There’s not a thing we can do…it’s all in God’s hands,” said Ryals. “We don’t know what the future is with this water but whatever it is we will get through it.”

“Pray for Arkansas, pray for these people that are fixing to lose their homes in water,” said Traffanstedt.