Pro-choice protesters demonstrated and banged on windows of the Arizona state Senate building after Roe v. Wade was overturned.

"Protesters threatened to break the AZ Senate entryway glass," Republican Arizona State Senator Wendy Rogers tweeted, as members were in the middle of voting on a series of bills.

The situation escalated into a "hostage" situation as lawmakers were instructed not to exit the building, Republican Arizona State Senator Kelly Townsend said.

The Republican Caucus of the State Senate later called the protest an attempted "insurrection." 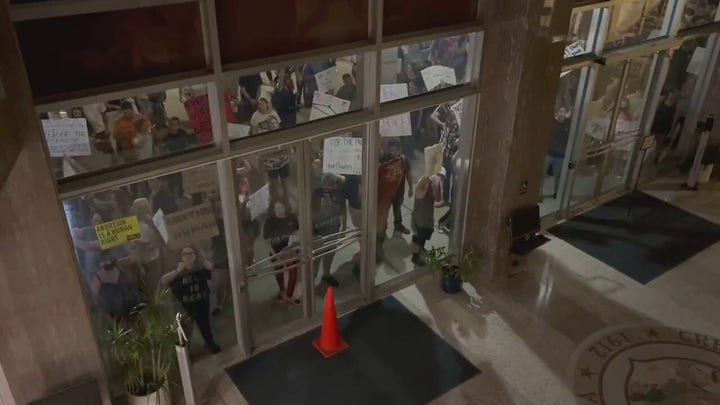 "We are currently there being held hostage inside the Senate building due to members of the public trying to breach our security," Townsend tweeted Friday night. "We smell tear gas and the children of one of the members are in the office sobbing with fear."

"I expect a J24 committee to be created immediately," she added, referencing the January 6 committee that is investigating the breach of the U.S. Capitol Building on January 6, 2021.

The state's Attorney General, Mark Brnovich, said that "this wasn't a peaceful or lawful protest."

"An angry mob defaced the Arizona Peace Officers Memorial last night, after being dispersed from the State Capitol. This wasn't a peaceful or lawful protest," Brnovich said. "We must never tolerate these criminal attempts to tear down our institutions and intimidate our officials."

According to the lawmakers, law enforcement officers then deployed tear gas to disperse the crowds and regain control of the building.

"Crowd was dispersed with tear gas." Rogers added, noting the protests were still continuing and the situation remained "very dangerous."

Another lawmaker confirmed the use of tear gas outside the building.

"While working inside we were interrupted by the sound of bangs and smell of tear gas," Rep. Sarah Liguori tweeted Friday evening. "Protestors cleared from the Capitol."

Heavily-armed officers were seen in and around the legislative building.

The crowd of protesters dispersed and lawmakers resumed their legislative schedule in a secure room.

"We are headed to a secure room to go vote," Rogers said.

"Everyone is okay and we are finishing our work," Townsend added.

"Feeling safe at the Capitol as I sit by 3 of my fellow senators who are armed," added Arizona State Legislator Warren Petersen.

In the hours following the situation, several members thanked the law enforcement officials who protected the Capitol.

"We are safe inside… God bless law enforcement," Rogers said.

The Republican Caucus of the State Senate also commended law enforcement for preventing an "insurrection."

"Violent pro-abortion protestors' attempts of an insurrection at the Arizona State Senate were thwarted Friday night, thanks to the swift actions from local and state law enforcement," said Kim Quintero, the Republican Caucus' communications director.

The GOP group said the "extremist demonstrations" were carried out by people "forcibly trying to make entry [to the building] by breaking windows and pushing down doors."

"We are incredibly thankful for our local law enforcement who quickly intervened during what could have been a destructive and dangerous situation for our members, staff, and public inside the Senate," said Senate President Karen Fann.

Friday was the last day of the session for state senators, who wrapped up a series of votes after the disruption.

The votes included a massive expansion of the state's private school voucher system that passed the House earlier this week. 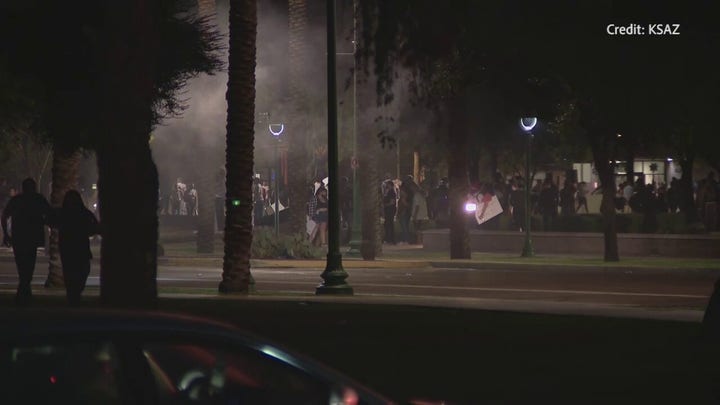 As of June 24, Planned Parenthood of Arizona paused all abortions, both medical and surgical. Seven of nine licensed providers in the state immediately halted abortions, according to AZ Central.

Arizona has competing laws that either completely ban the procedure or limit it to 15 weeks after a woman becomes pregnant. Arizona Gov. Doug Ducey signed the law limiting abortions to 15 weeks in March.

The old law, created in Arizona's territorial days, strictly prohibits abortion. It also calls for a mandatory prison sentence of two to five years for violators. The only exception to the ban is for abortions that are necessary to save a woman's life.

The state Senate's Republican majority said Friday that the old law totally banning abortion is enforceable. For now, it remains unclear which law will take precedence. The state court system, likely the Arizona Supreme Court, will have to settle the issue.

At least 13 states previously passed so-called "trigger laws" which ban most abortions, following the high court's decision. These will take effect immediately or within weeks of Roe v. Wade being overturned.