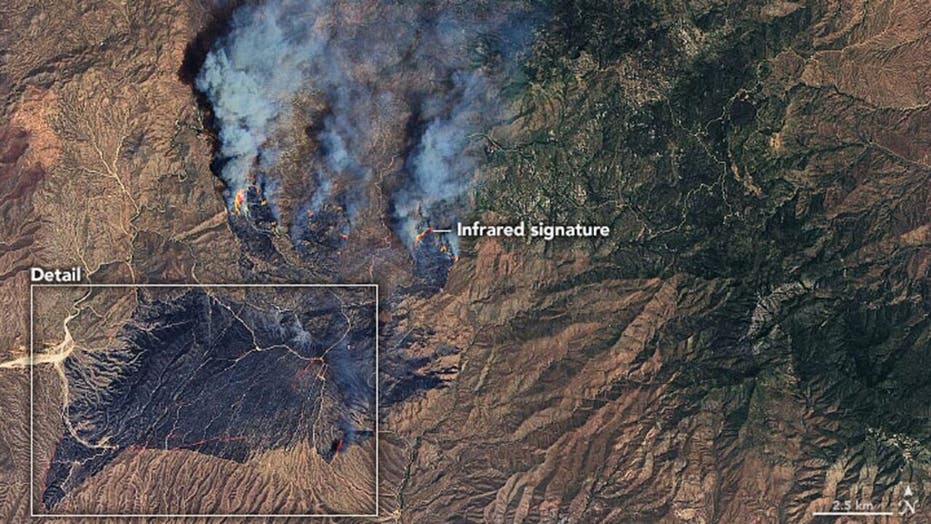 An Arizona wildfire is now the largest burning fire in the United States after doubling in size, the wildfire can now been seen from space.

A raging wildfire burning northeast of Phoenix, Ariz., now the largest active fire in the nation, is also in the record books after becoming one of the largest in state history as the blaze consumed another 10,000 acres as of Sunday morning.

Officials from the Tonto National Forest said Sunday the blaze, known as the Bush Fire, has scorched some 184,531 acres as of Sunday morning, up from 174,529 acres the day before. Officials said the blaze is only 15 percent contained.

"Residents along the Highway 188 corridor should expect to see fire and smoke as fuels burn within the large pocket of unburned fuel within the fire’s perimeter," officials said on InciWeb Incident Management System.

The National Weather Service (NWS) office in Phoenix said Saturday that the blaze is now the fifth-largest wildfire in state history.

"Despite the large area, fortunately no homes lost," the forecast office tweeted.

The Bush Fire underwent explosive growth last week, doubling in size from Tuesday to Wednesday and forcing thousands to evacuate.

Started from a vehicle fire in the Tonto National Forest on June 14, the Bush Fire has been experiencing rapid spread enhanced by hot, dry weather, low humidity and erratic, strong gusty winds.

While the blaze has come close to structures, no homes have been lost as the fire has mostly burned through vegetation in the national forest. Several state highways have been closed.

Those areas will remain under a "set" advisory, which means they may have to evacuate again if fire conditions deteriorate, according to FOX10.

The community of Sunflower and residents and visitors to Apache Lake remain under evacuation orders.

The blaze grew by nearly 20,000 acres from Friday night into Saturday, as multiple road closures remain in the area. Nearly 850 firefighters are battling the blaze, according to InciWeb.

A new blaze to the north of Phoenix sparked on Saturday and quickly grew to over 1,800 acres. The Central Fire, also burning in the Tonto National Forest, was scorching protected land with no containment, according to InciWeb.

"We will have resources in place to ensure all structures are protected. The fire is moving away from homes," the Daisy Mountain Fire Department said on Twitter.

They said the fire is traveling in the northeast direction, further into the forest.

In the southern part of the state, the Bighorn Fire that's been burning north of Tucson is now 19 percent contained after growing to 51,628 acres.

Officials said Sunday the fire burning in Ventana Canyon decreased, and reached Sonoran Desert vegetation at the base of the canyon by Saturday night. Fire crews will monitor Ventana and Esperero Canyons on Sunday.

Several communities have been evacuated due to the blaze, while others are being told to be on alert if conditions change.

Some 908 fire personnel are working to contain the blaze.