Wildfire season is in full force, with dozens of fires already burning across the country. But this year's fire season comes with a new challenge, COVID-19.

LAS VEGAS – Wildfire season is in full swing, with dozens of fires already burning across the country -- but this year's fire season comes with a new challenge: COVID-19.

The pandemic has injected yet another complication in what is already expected to be a much more active fire season due to above-average temperatures, dry conditions and heavy fuel loads.

“It's going to be a risk for all of us. Anytime we go walk down the street, go to the supermarket -- COVID is with us, it's not going away,” CAL Fire Chief Thom Porter told Fox News. “What we need to do is make sure that we are still responding to those acute emergencies, wildfires, put them out quickly, get home, get rest, be ready for the next one.”

Fire agencies have been forced to make adjustments in order to account for coronavirus and try to limit exposure to crews.

“Originally, when it was just a couple fires, you know, we were trying to even send them in individual vehicles, one firefighter, one vehicle. As we get closer into the fire season, we won't be able to do that,” Kacey KC, Nevada state forester and firewarden, said. “So we're taking other precautions, wearing masks, hand sanitizer, all of those things as we as we transport people to and from fires, looking at how we could rotate our crews around so that if one does get exposed, we still have another available to fight fires.”

Firefighters will be routinely screened for COVID-19 symptoms, and social distancing measures will be enforced during meals and briefings in order to help limit the spread of the virus.

But it becomes complicated to keep crews safe from the virus while embroiled in a fire like the size of the one that tore through the town of Paradise, Calif., in 2018 that scorched more than 150,000 acres and killed 85 people.

“The flames were exploding out the windows of these homes. I mean, it was falling off, massive explosions all over. It was like a war zone,” Vincent Carbone, who lost his home in the 2018 Camp Fire, told Fox News.

In Nevada, if a first responder tests positive while on the line, the whole crew will be pulled off, said KC, which could cause problems with having the adequate number of personnel to actually fight the fire.

“If they're out on a 14-day assignment, they're checking temperatures daily. We will pull them and the whole crew off the line, if there's any sickness or potential exposure, [that] could have some issues with having the right amount of people to actually attack the fires,” she added. 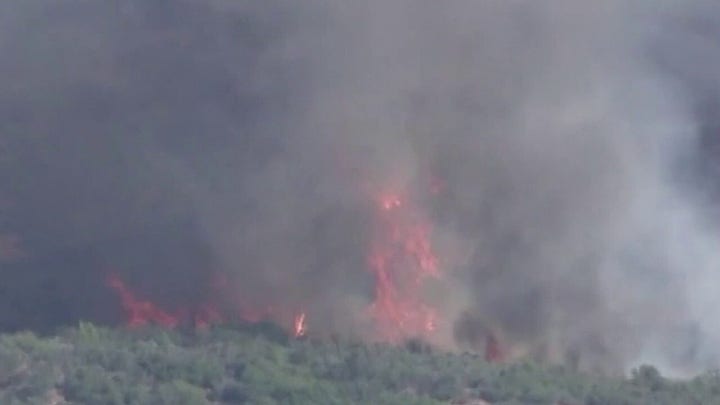 As of Thursday, the Bush Fire in Arizona has swelled to more than 100,000 acres making it the seventh-largest wildfire in the state’s history, according to KTAR. The large wildfire, which is only 5 percent contained, this early in this year’s fire season could be used as a guide for how the crews battling the pillars of smoke and flames also account for COVID in the hot summer months.

And what about asymptomatic team members who show up to camp with the virus unknowingly?

“That is kind of the million-dollar question for everybody. And of course, in the fire service and in fire camp, in particular, we're susceptible to that reality that there could be an asymptomatic or a number of asymptomatic individuals who spread COVID unknowingly and without any symptoms to contact trace,” Porter said.

Another uncertainty facing fire crews is the loss in tax revenue due to the pandemic that has state and local budgets in limbo.

Hundreds of fire department employees have been laid off across the country due to the pandemic, and a May report from the International Association of Fire Chiefs projects in total about 30,000 fire department jobs will be impacted along with a roughly $16 billion loss in tax revenue.

BEAR RESCUED FROM COLORADO WILDFIRE; BLAZE NEAR DURANGO GROWS TO OVER 2,700 ACRES

“Every state's budget for wildfire and all types of emergency response is in question, lots of cutbacks happening. Not all of us, but most of us were feeling pretty good in January as to where things were and where they were going,” Porter said. “The last three months really turned the world on its head, but definitely us in the West and our concerns about the future and the health of our firefighters as well as the health of our public.”

More than ever, officials are asking the public to do their part and be proactive to help reduce fire risk.

Nearly 5 million homes “really demand improvements” in order to mitigate fire risks and fend off embers, Wright noted, while acknowledging that the pandemic will require some tradeoffs in terms of what gets priority.

“COVID is an acute crisis in front of us that must be addressed immediately,” Wright said. “Wildfire is an enduring crisis that reaches back thousands of years, but most specifically must be addressed over the coming decade. We can't take incremental progress on wildfire, whereas COVID, it requires nothing short of an immediate response.”

While the pandemic clearly adds another layer of complexity to a job already full of risks and danger, Fire Chief Porter made it clear that regardless of the present challenges fire crews will be ready.

“There isn't a firefighter in the West that has not been overworked for years on end and so my concern is always there. What we will find is if we do start to have COVID spreading through our fire service, what it's going to do is it's going to stress those that have to remain on duty,” Porter said. “It could reduce the number of days off that people get in order to maintain their own health and work-life balance, but we will cover everything. We will fight every fire.”