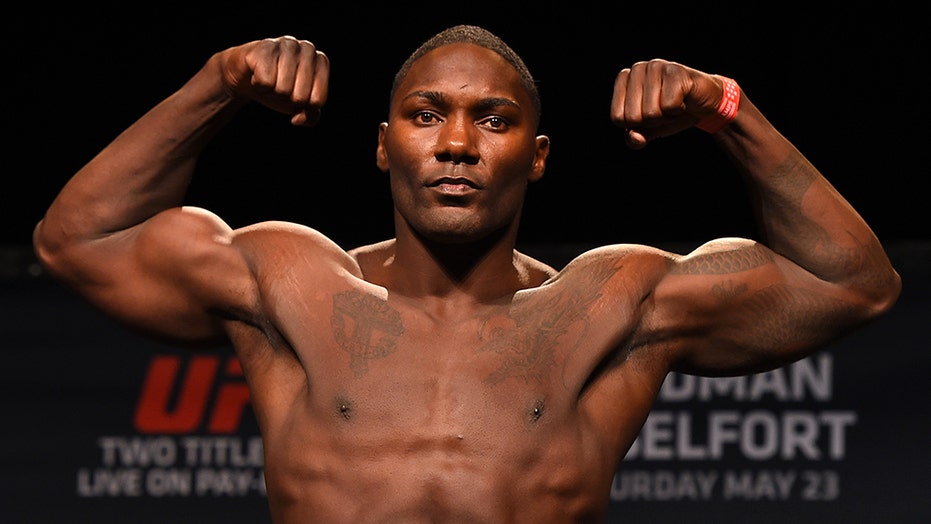 A woman who identified herself as Johnson’s girlfriend called police Monday to report a domestic incident, according to a Boca Raton Police Department probable cause affidavit, first obtained by TMZ Sports.

The woman said she was packing up Johnson’s belongings and asking him to leave the premises during an argument when the former mixed martial arts star picked her up and put her in a “football hold.”

When authorities arrived, Johnson, 35, told them he did not intend to harm her but wanted to diffuse the situation, police said.

The woman did not have visible injuries but said she was scared due to Johnson’s size and fighting experience.

Police determined Johnson "actually and intentionally touched" the alleged victim "against her will.” He was arrested and transported to Palm Beach County Jail and charged with domestic battery.

Johnson, who was nicknamed “Rumble” during his fighting career, was declared indigent and assigned a public defender. He is due back in court in June.

Johnson has faced domestic violence allegations in the past, ESPN reported.

In 2009, he pleaded no contest to a charge of misdemeanor domestic violence in California and was sentenced to three years of probation. In 2014, he was suspended by the UFC after abuse allegations from another woman. He was eventually cleared and returned to the sport. In February, a woman filed for a restraining order against Johnson.

Johnson was known as one of the most devastating power punchers in MMA during his nearly 11-year career. He abruptly retired from the sport in April 2017 after falling short in a title challenge against then-UFC Light Heavyweight Champion Daniel Cormier. Johnson holds a record of 22-5-1, with 16 knockouts.