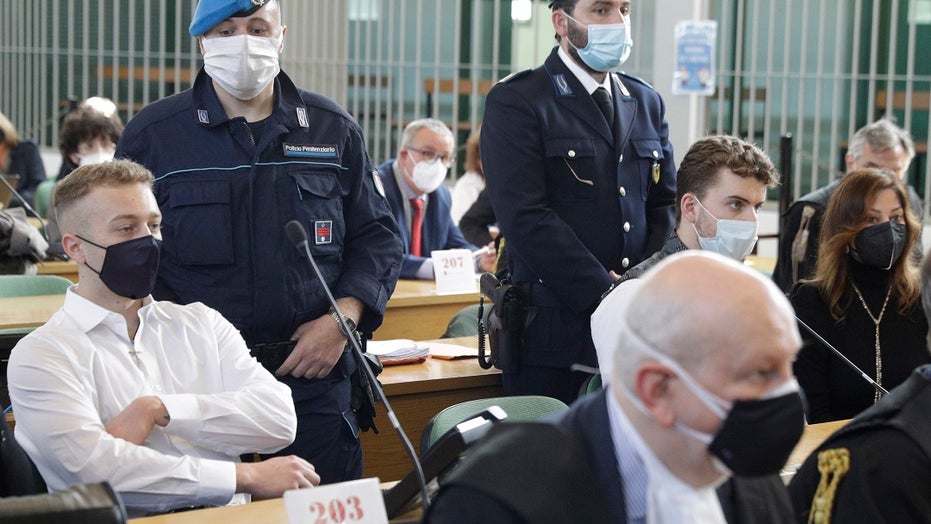 Two California men were sentenced to life in an Italian prison Wednesday night for reportedly stabbing a police officer 11 times, killing him, following a botched drug deal while vacationing in Rome.

Finnegan Elder, 21, and Gabriel Natale-Hjorth, 20, were charged in the death of Carabiniere Vice Brigadier Mario Cerciello Rega, 35, among other crimes, including extortion for stealing a backpack from a go-between in which they demanded their money back in exchange for the bag.

In a separate charge, jurors also found Elder guilty of carrying a knife, which was used to fatally stab Rega. The jury – six members guided by two judges – deliberated for more than 10 hours after the trial wrapped up Wednesday.

The killing occurred in the early morning hours of July 26, 2019, hours after the pair had unsuccessfully tried to buy cocaine via a go-between who connected them with a drug dealer near a nightlife district in Rome. They paid nearly $100 for drugs, but were duped, authorities said. Instead of cocaine, they instead received a crushed medicine tablet.

Finnegan Lee Elder, left, and co-defendant Gabriel Natale-Hjorth, right, sit Wednesday before a jury began deliberating their fate in the trial for the slaying of an Italian plainclothes police officer on a street near the hotel where they were staying while on vacation in Rome in summer 2019, in Rome. (AP Photo/Gregorio Borgia)

Craig Peters, attorney for the Elder family, told Fox News the pair snatched the go-between's backpack as reprisal. In the bag was a cell phone they used to communicate with the go-between to arrange to meet outside their hotel to exchange the backpack for the money they lost. Instead of meeting the pair, the go-between phoned the police to report the stolen bag.

Officers dressed in plainclothes then responded to the hotel.

The pair thought the officers were possible attackers when Elder stabbed Rega with a 7-inch combat knife, prosecutors said. The officer died a short time later. Elder said the police attacked him and Hjorth. None of the officers at the scene had a weapon.

Finnegan Lee Elder wipes a tear Wednesday as he listens as the verdict is read, in the trial for the slaying of an Italian plainclothes police officer in summer 2019, in Rome. A jury in Rome convicted two American friends in the 2019 slaying of a police officer in a drug sting gone awry, sentencing them to life in prison. The jury deliberated more than 12 hours before delivering the verdicts against Finnegan Lee Elder, 21, and Gabriel Natale Hjorth, 20, handing them Italy's stiffest sentence. (AP Photo/Gregorio Borgia)

Both claimed they acted in self-defense.

Elder said Rega, who had just returned from his honeymoon with his new bride, was on top of him and feared the officer was trying to strangle him. 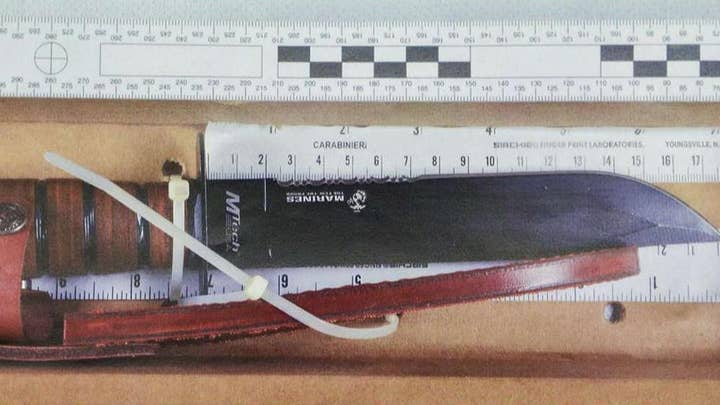 Hours before the verdict was read, Peters told Fox News that a surviving officer, Andrea Varriale, had lied about the string of events leading up to the killing.

"He has almost a dozen things that he has said that are lies," Peters said. "One of which, he has now admitted to as a lie, which is that they had their guns that night and he now admits, no, that they didn't have their guns."

"This is really a credibility contest between two different versions of events," he added. "When you look at the two, there really is no other conclusion that you can draw except that the only credible story is Finnegan's, not because you have to believe him… but you have to believe what he says because everything he has said is consistent with the objective facts."

In this Wednesday, Sept. 9, 2020 file photo, Rosa Maria Esilio, widow of Italian Carabinieri paramilitary police officer Mario Cerciello Rega, holds a photograph of her husband ahead of a hearing of the trial in which two American tourists are accused of his murder in Rome. (AP Photo/Alessandra Tarantino, Pool)

While in police custody, Peters said Finnegan was "hit and kicked and spit on." He was initially interrogated without an attorney and later with an attorney who didn't know English, he said.

The trial against the pair began in February 2020, shortly before Italy was ravaged by the coronavirus pandemic and nationwide lockdown restrictions were imposed.

Peters laid much of the blame on the police for not following protocols.

"Had the Carabiniere that evening followed basic police protocols for doing an undercover operation, Cerciello Rega would be alive today," he said.

Finnegan Lee Elder, left, crosses his fingers as he talks with his parents Ethan and Leah Elder. (AP Photo/Gregorio Borgia)

Finnegan was traveling through Europe when he and Hjorte decided to meet up.

"Finnegan had kind of been struggling in life and trying to figure what he was going to do," Peters said. "He talked with his parents and thought ‘Well maybe if I kind of just get away,'"

He planned to travel to Germany and Spain by himself before coming home, Peters said.

"Finnegan took a side trip to go to Rome to meet up with Gabe and just hang out with him for a day or two," Peters said.