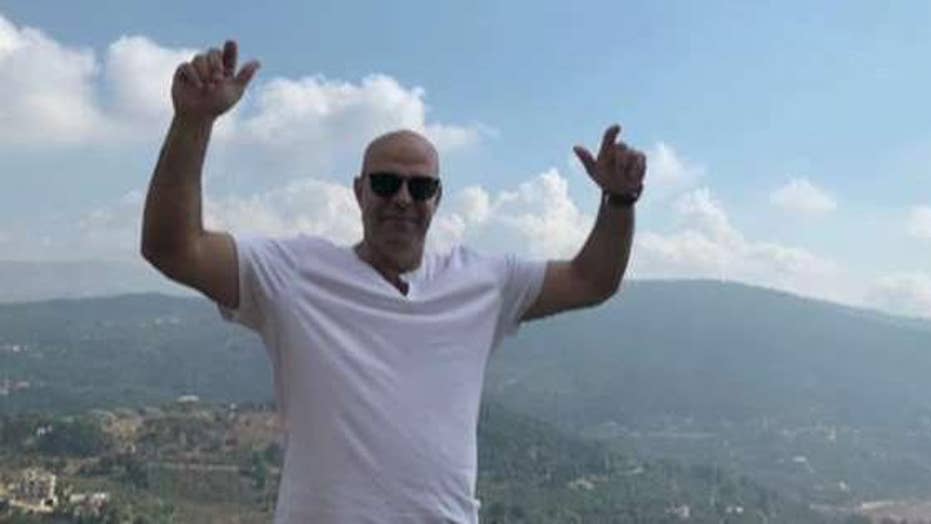 Guila Fakhoury and Celine Atallah say Amer Fakhoury is being used as a political football and that all of the allegations are false.

A New Hampshire man who was beaten and tortured after being detained during a family vacation in Lebanon six months ago was released from prison on Thursday.

Amer Fakhoury, a naturalized U.S. citizen, was arrested in his native Lebanon during a family trip in September.

American forces on Thursday brought Fakhoury home despite a Hezbollah-affiliated judge attempting to block his release, which was ordered by a military tribunal.

The 57-year-old father of four was flown from Beirut aboard a U.S. Marine V-22 Osprey from the amphibious assault ship USS Bataan, currently in the Red Sea. He was then flown to the U.S. Navy weapons base in Souda Bay on the Greek Island of Crete, then headed home to Dover, N.H.

Fakhoury, who fought in the South Lebanon Army during Israel’s occupation of the country, was taken into custody after a Hezbollah-backed newspaper accused him of torturing Hezbollah and Palestinian terrorists in the '80s and '90s. He was never previously accused of the charge, and his family and attorney deny it.

Fakhoury’s release comes after Sens. Jeanne Shaheen, D-N.H., and Ted Cruz, R-Texas proposed bipartisan sanctions against senior Lebanese officials involved in his detention and the State Department pushed for his freedom. Lebanon is a major beneficiary of American aid, having received more than $2.29 billion in military assistance since 2005.

In a press call Thursday, Shaheen said she believes Fakhoury’s arrest was baseless and politically motivated, adding that he was caught between groups jockeying for power in the state. Shaheen said her office found no evidence to substantiate the claims against him.

During a news conference on Thursday to update the American public on the coronavirus outbreak, President Trump said that Fakhoury's release was a "big thing" and that he was on the way home.

"Today we are bringing home another American citizen," the president said.

Amer Fakhoury is a faithful supporter of President Trump, is active in the New Hampshire Republican Party, and even attended a campaign event where he was snapped in a photo with the president, giving a thumbs-up (Family Photo)

Trump also said he was "grateful" to the Lebanese government that Fakhoury's family "stood by him so strongly."

The Fakhoury family released a picture showing Amer resting on a gurney-like bed with an oxygen mask on his flight back to the U.S. Fakhoury lost nearly 50 pounds in captivity after developing stage 4 cancer related to an infection stemming from unsanitary conditions.

His lawyer Celine Atallah told Fox News: "His condition deteriorated during his captivity and he will need to seek urgent specialized medical care for the Lymphoma as soon he lands." Atallah praised the bipartisan manner of getting him released and thanked Shaheen for her involvement in freeing him from early on. She also had praise for other U.S. officials: Cruz and President Trump.

Amer Fakhoury resting on stretcher on his way home to the U.S. Courtesy of the Fakhoury family.

In a statement, Shaheen said that anytime a U.S. citizen is wrongfully detained by a foreign government, "we must use every tool at our disposal to free them."

"I’m very glad that Amer is finally coming home and will be reunited with his family," Shaheen said. "No family should have to go through what the Fakhoury family has gone through. His health is in critical condition and now it is vitally important that he receives proper treatment to get on the road to recovery."

The plight of the New Hampshire resident caught the attention of his U.S Sen. Jeanne Shaheen, D-NH, who has threatened to sanction individuals involved in his imprisonment. (Fakhoury Family)

In her statement, the New Hampshire senator added, "I have long supported close ties between the United States and Lebanon, and hope this is a first step to repairing relations.”

In a statement to Fox News, Fakhoury’s family praised the efforts by Shaheen.

“It’s hard to put into words how grateful and relieved we are to finally be returning to the United States with Amer. We have been through a nightmare that we would never wish on anyone," the family said in a statement to Fox News. "From the bottom of our hearts, we want to thank everyone who believed in Amer’s innocence and fought tirelessly to bring him home to the country he loves."

The family specifically thanked Shaheen. "Senator Shaheen pursued every means possible to secure Amer’s freedom—this would not have happened without her. Amer considers Senator Shaheen his hero.”

Amer Fakhoury was imprisoned apon his return to Lebanon, now his family is pleading for his release; Jacqui Heinrich has the latest.

Cruz, who co-sponsored the sanctions bill with Shaheen, noted in a statement that it is the most fundamental responsibility of the government "to protect American citizens at home and abroad."

His statement suggested some on the hill continue to believe that the Lebanese government was involved, as was outlined in the sanctions bill he co-sponsored with Shaheen.

Hezbollah’s influence in Lebanon has grown massively over the years and in the May 2019 election, it increased its number of parliament seats to hold some key ministries. The SLA, of which Fakhoury was a former member, was set up to fight Hezbollah's influence and was funded by the Lebanese government until 2000.

Cruz said: “We are all heartened by the release of Amer Fakhoury, an American citizen who was unlawfully seized, falsely charged, and held hostage for months. I’m grateful that Sen. Shaheen and I were able to work side-by-side, along with the President's National Security Council team, to vigorously press Lebanon to do the right thing,"

Atallah had previously told Fox News the charges were fabricated, noting that after investigations into the infamous prison and those accused of torture and murder were made public, Fakhoury's name was not among them.

Amer Fakhoury after getting U.S. citizenship.

After being held without charges for nearly six months, Fakhoury was charged in March by a military judge with murder and attempted murder of prisoners at a jail run by the SLA. He also was charged with kidnapping and torture.

Following Israel’s withdrawal from Lebanon, Fakhoury was charged -- along with thousands of other SLA members -- for working with Israel, but his record was cleared in 2018 of any wrongdoing. His family pointed out previous charges against him involved working with Israel, not torture.

Tony Badran, a research fellow at the Foundation for Defense of Democracies who focuses on the region and has followed the Fakhoury case, told Fox News Fakhoury’s release was the result of a bill introduced last month by Shaheen and Cruz.

The daughters of Amer Fakhoury plea for his release in Lebanon.

"The Shaheen-Cruz bill ended a spiraling hostage negotiation on the part of the Lebanese authorities, likely to secure the release of a Hezbollah financier serving prison time in the U.S. That it was the Lebanese state who took Fakhoury hostage and conducted the negotiations on Hezbollah’s behalf puts to rest any doubt that Lebanon is the Hezbollah state," Badran told Fox News.

Shaheen’s office said there is no truth to reports that Fakhoury’s release was linked to negotiations over the jailed financier.

Fakhoury's release came the same day that American Michael White, who was held in Iran since 2018, was released on medical furlough, Secretary of State Mike Pompeo announced.

A video on Twitter showed a helicopter leaving the US embassy in Beirut, supposedly with Fakhoury aboard.