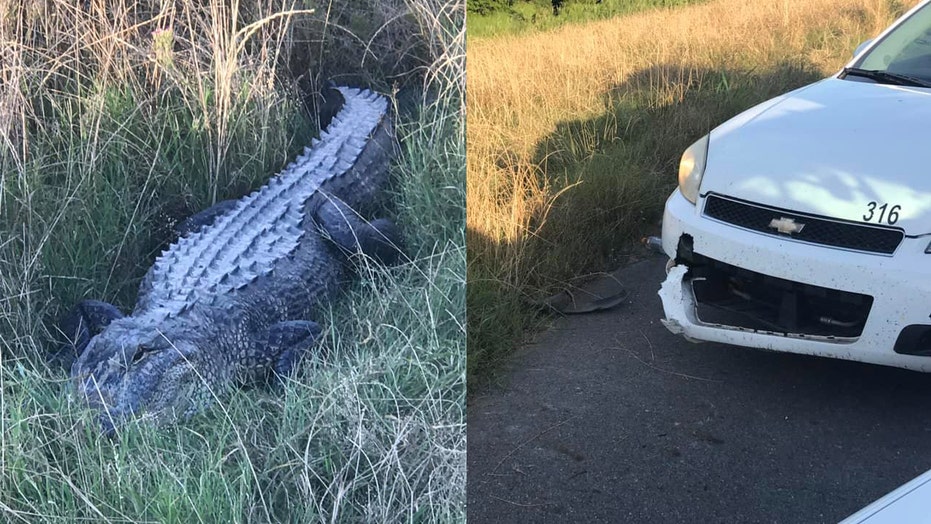 This reptile didn't take a bite out of crime -- but he did take a chunk out of a crime-fighters' car.

The Caddo Parish Sheriff's Office in Louisiana said on Facebook a deputy spotted an 8-foot alligator Monday in the middle of Highway 1, but before the call was through, the cops learned the gator just wanted to eat and run.

Deputies tried to contain the gator on the roadway north of Caddo Parish while awaiting the arrival of wildlife removal experts.

But this gator was not going to be captured. The reptile ended up escaping the long arm of the law after taking a bite out of a deputy's patrol vehicle.

An 8-foot alligator took a bite out of a Louisiana Sheriff Deputy's vehicle on Monday. (Caddo Parish Sheriff's Office)

Photos posted to the sheriff's Facebook show the gator lurking in tall grass and the damage to the vehicle afterward.

Raw Video: Miami Fire and Rescue wrangle a gator who wandered into a residential yard

Fire and rescue teams wrangle a gator that wandered into a backyard.

A piece of the bumper that was torn away from the vehicle could be seen lying on the roadway.

"The one that got away..." the sheriff's office wrote.

The sheriff's office said no one was injured during the incident.