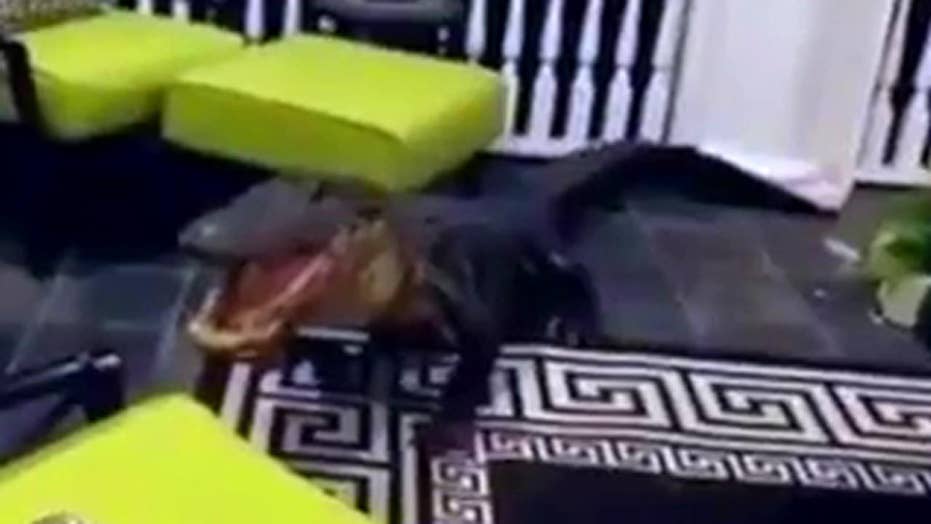 A South Carolina home had an intruder on Sunday morning, and it was not the Easter Bunny. A 9-foot alligator was found thrashing around on the back porch at around 1:30 a.m.

Susie Polston had fallen asleep watching television, but was awakened by a noise she described as “aluminum rubbing up against aluminum,” WFXL reports.

With the assumption of a break-in, Polston and her family hid in a bedroom and called the police. Ben Polston, 16, tried to get a look at the suspected burglar and started yelling, “Oh my God, I found it! I found it!”

Ben Polston, however, did not find a burglar. He found the giant alligator that climbed up 15 steps, broke through a locked screen door, and broke tables and other porch items before taking a rest.

The gator made itself comfortable between a sofa and a swinging bench. According to the Post and Courier, it looked fake. But when they knocked on the window, it moved.

“It was just surreal. It was so bizarre,” Susie Polston said.

After seven years in Mount Pleasant, the Polstons have seen plenty of wildlife inside and outside of their home, including rattlesnakes, turtles, geese and even alligators.

“If you’re playing golf, you’ll see three or four (alligators) on the course any given day,” Susie’s husband Steve said. “That’s not unusual.” But the family had never had a gator in their home.

The Department of Natural Resources said the alligator was probably making a migratory mating route from one pond to another and somehow got lost.

On Monday, the family hired help to replace the door with something a little more “gator-proof,” in hopes of not finding another alligator in their home in the future.

“We think this was rare,” Susie said. “We hope it was rare.”