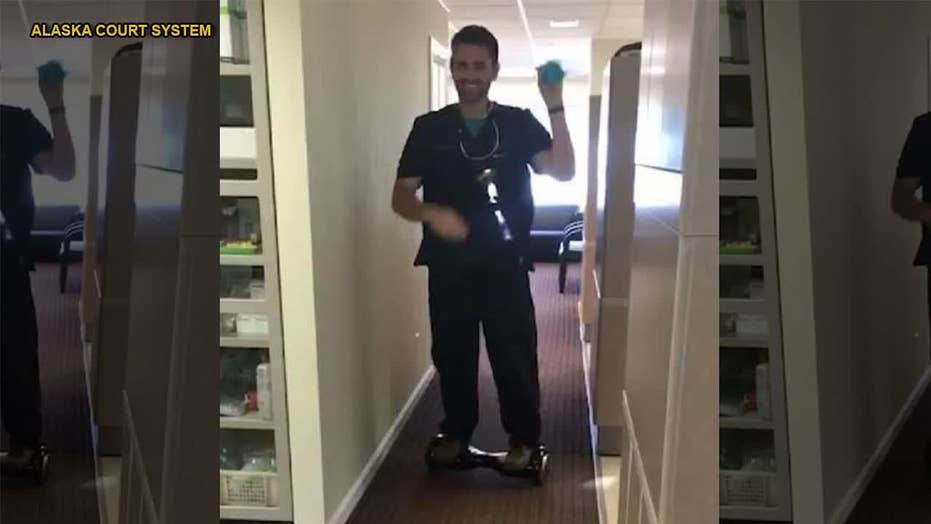 Seth Lookhart, an Alaska dentist who was filmed performing a dental procedure while on a hoverboard, has been convicted on 46 federal and misdemeanor charges including felony medical assistance fraud. Lookhart could face up to 10 years in prison, a fine of up to $100,000 and restitution.

An Alaska dentist, who went viral after he was filmed riding a hoverboard while performing a dental procedure, was convicted Friday on dozens of federal and misdemeanor charges ranging from unnecessarily sedating patients to defrauding the state Medicaid program.

Seth Lookhart was convicted on 46 counts, including felony medical assistance fraud and scheming to defraud, as well as misdemeanor counts of illegally practicing dentistry and reckless endangerment, prosecutors said. Anchorage Superior Court Judge Michael Wolverton said he found the evidence presented by the state during a five-week bench trial to be “simply overwhelming.” Lookhart's corporation, Lookhart Dental LLC, which did business as Clear Creek Dental, also was convicted of 40 criminal counts.

Last month, a former patient testified that an investigator showed her a 2016 video of the dentist riding the motorized, wheeled vehicle while extracting one of her teeth when she was sedated.

"I obviously wouldn't have approved that. That's dangerous," Veronica Wilhelm said on the stand. “I would’ve said ‘hell no!’ No, that’s unprofessional.”

Wilhelm said she did not consent to be filmed and added that Lookhart also sedated her son for a routine teeth cleaning, Anchorage’s KTUU-TV reported.

In 2014, Lockhart was a new dentist who took a job working for two established dentists. He was to be paid either $240,000 a year or 30 percent of the money he brought in, whichever was higher, assistant attorney general Eric Senta said.

Cranford persuaded Lookhart to offer intravenous sedation to Medicaid patients as an alternative to less costly anesthesia. The cost of IV sedation generally is not included in a patient’s $1,150 annual limit for non-emergency dental procedures. The practice became lucrative for Lookhart, and his practice in 2016 accounted for 31 percent of all Medicaid payments for IV sedation in the state, prosecutors said.

He also schemed to cut out his partners by billing Medicaid under a different provider identification and having payments sent directly to his home, prosecutors said. Since Lookhart obtained an IV sedation license in 2015, prosecutors said, Medicaid paid him about $1.9 million for IV sedation services.

Lookhart is scheduled to be sentenced April 30 and could face up to 10 years in prison, a fine of up to $100,000 and restitution, The Associated Press reported.