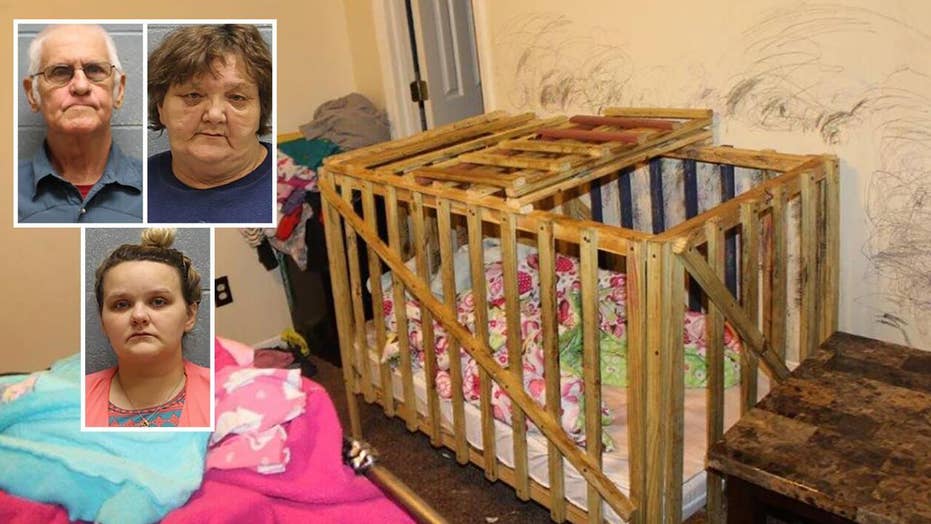 An Alabama man named James Bond was arrested in Smiths Station along with his wife and granddaughter, after being accused of locking children in makeshift wooden cages. The suspects were charged with two counts each of aggravated child abuse and reckless endangerment. Lee County District Attorney Brandon Hughes shares details on what he describes as a 'particularly heinous' case of child abuse.

An Alabama man named James Bond and two others accused of locking children in makeshift wooden cages inside an apparent house of horrors have been arrested, investigators said Wednesday.

Deputies found the cages inside a home in Smiths Station – a small city near the Alabama-Georgia border – that the 69-year-old Bond shared with two others: Pamela Deloris Bond, 66, and Kylla Michelle Mann, 30, Lee County Sheriff Jay Jones said in a statement.

Sheriff’s investigators went to the home with child welfare workers on Monday to look into a report of possible child abuse. Inside the house, they found four children, ages 11, 10, 4 and 3.

Deputies then noticed two wooden cages with locks and hasps, Jones said. Investigators determined the four children had been locked in the cages on multiple occasions.

The sheriff’s office released photos of what appeared to be the wooden crib-shaped cages with a mattress and blanket inside. Each had a slatted lid across the top that appeared to open and close.

A wooden crib-shaped cage at the home appeared to have a slatted lid that opened and closed. (Lee County Sheriff's Office)

A fifth child, an 8-month-old infant, also lived at the home but was not present when deputies arrived, investigators said. All five children were placed in the care of the county’s Department of Human Resources.

CALIFORNIA 'HOUSE OF HORRORS' PARENTS SENTENCED TO LIFE IN PRISON

While the sheriff’s statement did not say how the suspects and children were related, WRBL-TV reported that investigators confirmed Mann is the children’s mother and the Bonds are her grandparents – the great-grandparents of the victims.

The two cages appeared to each have a mattress and blanket inside. (Lee County Sheriff's Office)

The suspects each were charged with two counts of aggravated child abuse of a child younger than 6 and two counts of reckless endangerment. Additionally, Pamela Bond was charged with one count of tampering with physical evidence.

Online records were unavailable Wednesday afternoon and it was unclear whether the suspects had an attorney who could comment on their behalf.