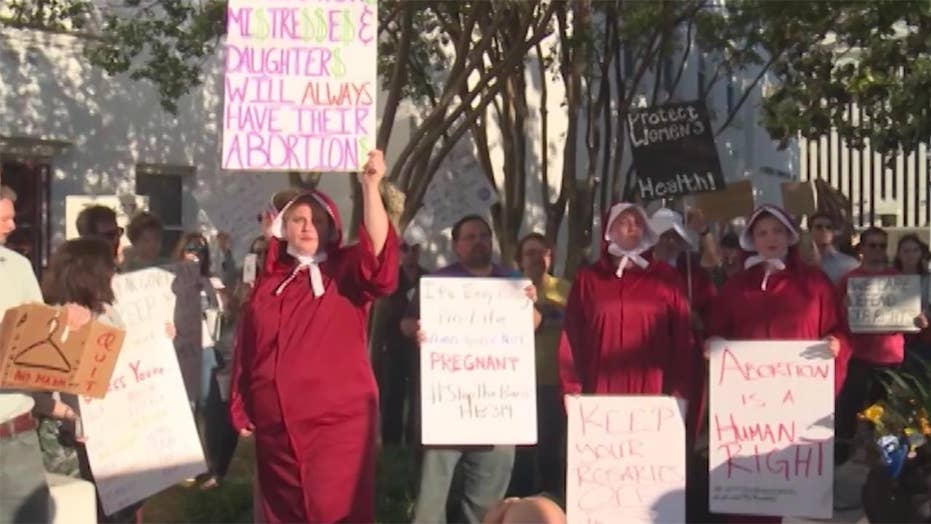 Volunteers at the POWER House, a multipurpose venue that serves as a base for groups like the Montgomery Area Reproductive Justice Coalition and the Yellowhammer Fund, said they’ve gotten a lot of phone calls from women after the State Senate passed the measure on Tuesday.

“We already have seen panic from people who are unsure of whether they are going to be able to get the abortions they have scheduled this week,” said Amanda Reyes, president of the Yellowhammer Fund.

The POWER House in Montgomery serves the patients of Reproductive Health Services, the city's only abortion clinic.  (Fox News)

Reyes assured callers that they still can.

“A lot of the work we’re doing right now is actually palliative and trying to comfort people and get the word out that abortion is still legal in Alabama,” said Reyes.

The POWER House works with patients of the neighboring Reproductive Health Services, the only abortion clinic in Montgomery and one of three in the state. On any given week, between three to ten women stay there the night before an abortion procedure, ensuring that those traveling long distances can make their appointments.

“People love this space. We get thank you notes mailed here all the time. People write nice things in our guestbook,” said Reyes.

But pro-life advocates are emboldened after the Republican-held State Senate handed them a victory. The bill bans all abortions except in cases where the pregnancy threatens the mother’s life.

“Now that the governor has signed HB 314, it is the law of Alabama. Tomorrow, I plan to get a warrant to arrest the abortionists,” said Rev. James Henderson, a prominent pro-life activist and member of the Alabama Republican Executive Committee.

Alabama joins a number of states that have passed anti-abortion measures this year. Georgia, Kentucky, Mississippi, and Ohio have all outlawed abortion once a doctor detects a fetal heartbeat. But HB 314 supporters believe this bill is the one that can challenge Roe v. Wade, and some attorneys agree with them.

“For the Democrats to think this will never go through and will get turned down in Supreme Court, they better be praying and hoping that Ruth Bader Ginsburg will be around for a long time,” said attorney Natalie Elisha Gold.

The bill, which doesn't allow exception for instances of incest and rape, is designed to head to the Supreme Court to challenge Roe v. Wade.  (Fox News)

“There are some other good laws on the way to the court. This is a good law. And we have reason to believe that because it is such a strong law, it might get some priority in the appeals process,” said Henderson.