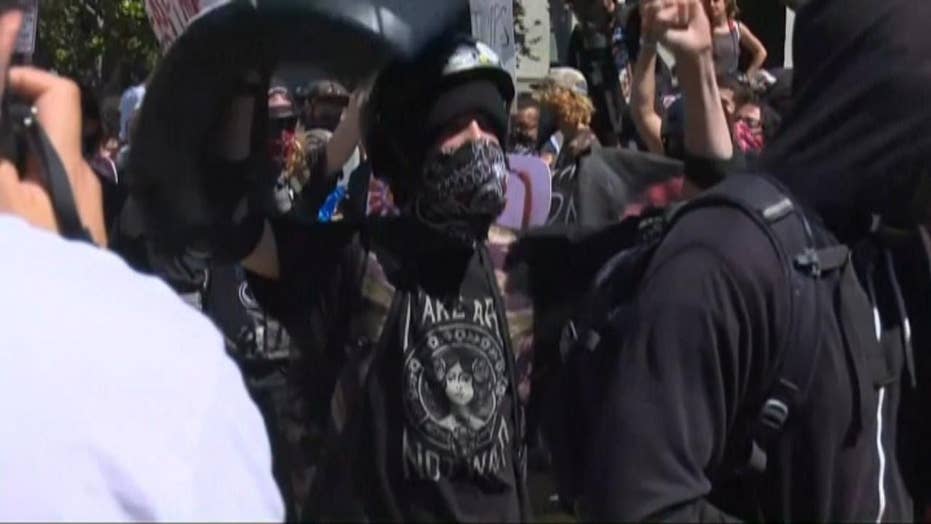 Protesters from the poles of the U.S. political spectrum converged on another American city Sunday as violence erupted when left-wing protesters surrounded and attacked at least five right-wing demonstrators in Berkeley.

The group of more than 100 hooded protesters, with shields emblazoned with the words “no hate” and waving a flag identifying themselves as anarchists, busted through police lines, avoiding security checks by officers to take away possible weapons.

Several thousand people had congregated for a “Rally Against Hate” in response to the planned right-wing protest that raised concerns of violence and triggered a massive police presence.

Berkeley police chief Andrew Greenwood defended how police handled the protest, saying they made a strategic decision to let the anarchists enter to avoid more violence.

Greenwood said to The Associated Press: “the potential use of force became very problematic” given the thousands of peaceful protesters in the park. Once anarchists arrived, it was clear there would not be dueling protests between left and right so he ordered his officers out of the park and allowed the anarchists to march in.

There was “no need for a confrontation over a grass patch,” Greenwood said.

Among those assaulted was Joey Gibson, the leader of the Patriot Prayer group, which canceled a Saturday rally and was then prevented from holding a news conference when authorities closed off the public square Gibson planned to use.

After the anarchists spotted Gibson at the Berkeley park, they pepper-sprayed him and chased him out as he backed away with his hands held in the air. Gibson rushed behind a line of police wearing riot gear, who set off a smoke grenade to drive away the anarchists, Fox 40 reported.

Separately, groups of hooded, black-clad protesters attacked at least four other men in or near the park, kicking and punching them until the assaults were stopped by police. The assaults were witnessed by an Associated Press reporter.

“You are an immigrant,” Karla Fonseca said. “You should be ashamed of yourself.”

Several other people also yelled at the man, who said he was born in Mexico but supports President Donald Trump’s proposal to build a wall along the southern border.

Police pulled one supporter of Trump out of the park over a wall by his shirt as a crowd of about two dozen counter demonstrators surrounded him and chanted “Nazi go home” and pushed him toward the edge of the park.

Several people were arrested for violating rules against covering their faces or carrying items banned by authorities. The black clad protesters carried a large banner that identified them as anarchists, according to FOX40.

The left-wing protesters far outnumbered those who showed up for the largely peaceful rally, which police tried to keep safe by setting up barricades around it and checking people who entered to make sure they did not have prohibited items like baseball bats, dogs, skateboards and scarves or bandanas they could use to cover their faces.

Officers arrested 13 people, most for having prohibited items, Greenwood said.

Berkeley authorities refused to issue a permit allowing Sunday’s event. The city and the University of California, Berkeley campus have been the site of political clashes and violence over the past year.

The deadly confrontation in Charlottesville, Virginia, on August 12 during a rally of white supremacists led San Francisco police and civil leaders to rethink their response to protests.

Earlier Sunday, a separate counter protest took place on the nearby Berkeley university campus despite calls by university police for demonstrators to stay away. From the campus, the crowd marched to Civic Center Park and merged with the anti-rally protesters who already had gathered there.

The Berkeley rallies happened a day after a rally planned by a right-wing group fizzled amid throngs of counter-protesters in San Francisco.

Berkeley Mayor Jesse Arreguin had urged counter-protesters to stay away.

The organizer of Sunday’s right-wing event was Amber Cummings, a transgender woman and Trump supporter who has repeatedly denounced racism. Cummings said that demonization by mayors in both cities and left-wing extremists made it impossible for people with other views to speak out.

Cummings has said on social media and in media interviews that Marxism is the real evil and that members of the anti-fascist movement are terrorists.

“I’m not safe to walk down the road with an American flag in this country,” she told reporters last week.

Saturday’s event was organized by a group known as Patriot Prayer. Its leader, Gibson, also repeatedly has disavowed racism.

FOX61 reported that the group told its members: “No extremists will be allowed in. No Nazis, Communist, KKK, Antifa, white supremacist, I.E., or white nationalists. This is an opportunity for moderate Americans to come in with opposing views. We will not allow the extremists to tear apart this country.”