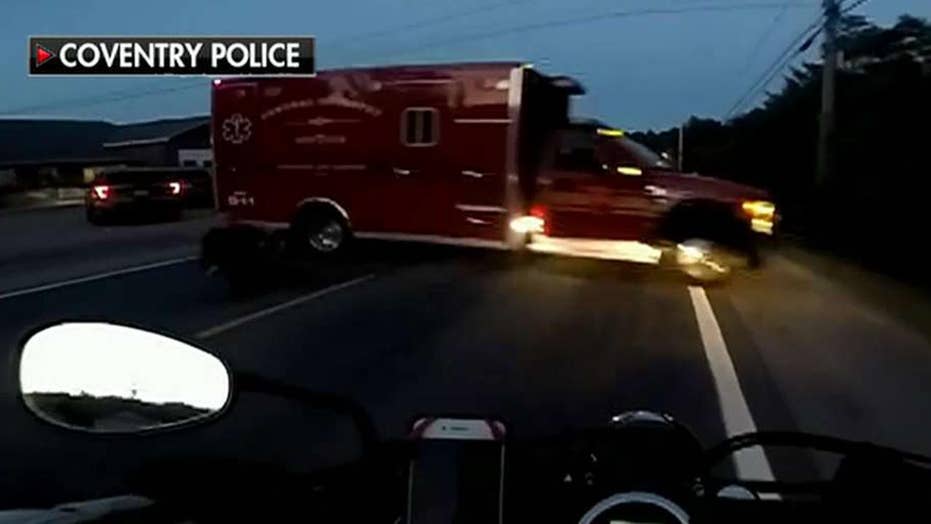 A thirteen-year-old autistic boy was being evaluated at a local fire station when he stole the ambulance and pulled out into traffic.

Three people were injured after a teenage boy stole an ambulance from a Rhode Island fire station and crashed into a motorcyclist while dragging a firefighter trying to stop the vehicle on Thursday, police said.

The 13-year-old boy, who has attention deficit hyperactivity disorder and autism, the motorcyclist and Coventry firefighter Scott Brown sustained minor injuries following the incident that was captured in dramatic videos, the Boston Globe reported.

“We are grateful that this incident did not result in serious injuries or loss of life,” Coventry police Colonel John MacDonald said in a statement.

The boy was brought to the Central Coventry Fire Station #7 Thursday night after officers met the teen and his mother at their car parked along Route 117. Officers attempted to calm the “excited and unsettled” boy before bringing him to the fire station for evaluation.

Video released by the police department showed the 13-year-old at the fire station running to the garage bay. Moments later, the teen drives the ambulance out of the garage, striking a police cruiser before driving across Route 117.

Brown attempted to stop the boy, but the doors were locked. He held onto the side of the ambulance for a moment before falling off. A motorcyclist traveling down the road then slammed into the ambulance before the vehicle rolled down an embankment.

MacDonald said the boy will most likely not face any charges. The incident remains under investigation.

“For all the first responders involved in this incident, it brings into acute focus the challenges that parents, care givers, and children experience when dealing with autism and other disabilities,” MacDonald said. “It also reminds us of the difficulties our officers and firefighters face when assessing and treating individuals who suffer from mental health disorders.”