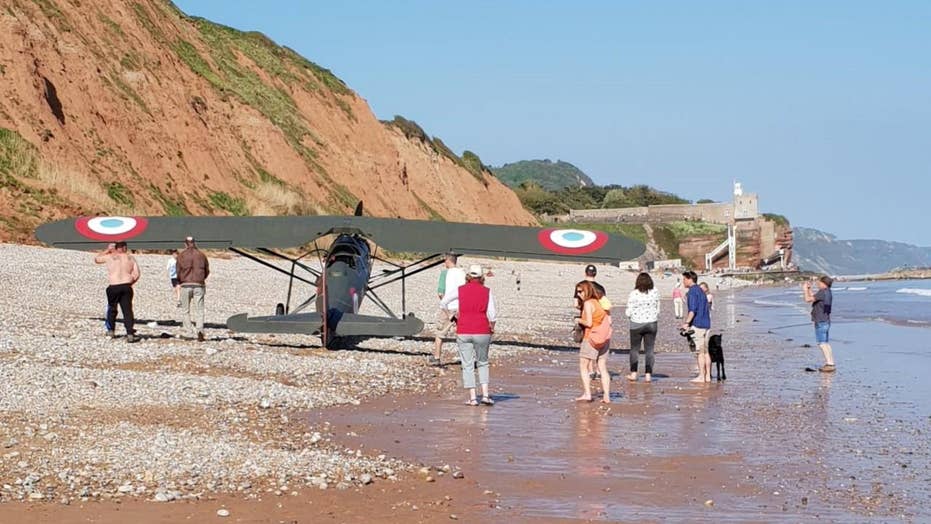 A WWI-era plane near the southern coast of England was forced to make an emergency landing on a beach full of onlookers.

A pilot operating a WWI-era aircraft near the southern coast of England was forced to make an emergency landing on a beach full of onlookers after his plane lost power on Saturday afternoon.

Zac Rockey, 47, had taken off earlier that day with a friend from Branscombe, in Devon, to attend an event marking the 100th anniversary of the end of World War I, at Bodmin Airfield, SWNS reported. It was on their way back that he began experiencing engine failure.

“We were flying along, taking in the view, when it began to lose power,” said Rockey. “[The engine] failed, the options available to me in the cockpit didn’t work. So I had to look for somewhere to land.”

Just before landing, Zac Rockey and passenger Trudi Spiller frantically tried to warn beach-goers to move out of the way. (SWNS)

Losing height, Rockey and his passenger, Trudi Spiller, eventually came to realize they would need to land on a stretch of Jacob’s Ladder Beach in Sidmouth, Devon, when the engine cut out altogether.

"He's looking out of the side of the plane and I started moving my arms telling people to get out of the way,” said Spiller, adding that she was never actually in fear for her life, as she trusted in Rockey’s skills.

"I was slightly frightened. It wasn't like my life flashed before me or anything but I was thinking 'Here we go,’” she told SWNS.

Onlookers and their dogs were able to clear out of the plane's path before Rockey set it down on the beach in Sidmouth, Devon. (SWNS)

In footage of the plane’s safe landing, one onlooker can be heard yelling, “That’s well done!” (SWNS)

Footage taken from the ground shows beachgoers shuffling out of the way of the incoming aircraft. Upon witnessing the plane’s safe landing, one even yells, “That’s well done!” in the direction of the Rockey and Spiller.

Spiller herself later revealed that the whole ordeal gave her “jelly legs,” while Rockey admitted that he’s “had better runways” in the past.

Coast Guardsmen helped Rockey and Spiller tow the aircraft to a safer location down the beach. (SWNS)

The Coast Guard later towed Rockey’s aircraft to a safer location nearly 1,000 feet away before Rockey and the next day a team of officials dismantled it in order to remove it from the beach, which is partially surrounded by cliffs.

The plane's wings were removed in order to tow the aircraft off the beach. (SWNS)

The plane parts will be delivered back to Rockey for reassembling.