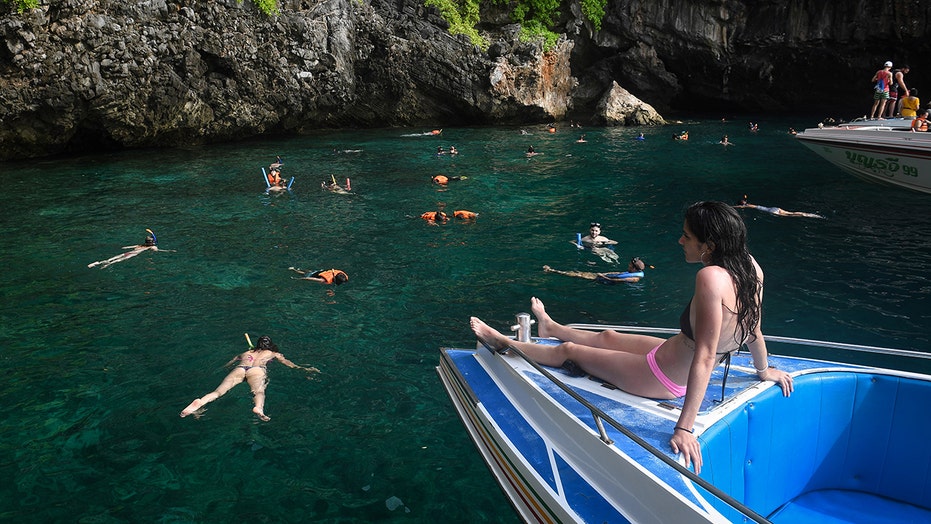 Don’t hold out hope for a visit to Maya Bay anytime soon.

After temporarily closing in June of 2018 – and closing to tourists indefinitely in October – the previously popular tourist destination on Thailand’s Phi Phi Leh island will likely be closed until 2021.

Officials cite the need for the local ecosystem, specifically the coral reefs, to recover after extreme tourism took its toll on the environment.

The Phi Phi islands have been popular with tourists since they were featured in Danny Boyle’s 2000 film "The Beach," but authorities say visitors contributed to the damage of the coral reefs. (Lillian Suwanrumpha/AFP/Getty Images)

WATCH: TOURIST TO BALI NEARLY SWEPT AWAY BY MASSIVE WAVE

“Four months’ closure was not enough,” Songtham Sukswang, the director of Thailand’s Office of National Parks, told Reuters when instituting the indefinite closure of the beach in 2018. “We need at least a year or even up to two years or maybe more for the environment to recover — this include[s] the coral reefs, mangrove and the beach.”

Maya Bay, which was featured in “The Beach,” starring Leonardo DiCaprio and directed by Danny Boyle, had reportedly seen a surge in visitors since the movie was released in 2000 — at times more than 4,000 visitors per day, the Associated Press previously reported. Other estimates put that number at closer to 5,000 per day. As a result, the coral reefs reportedly suffered, and sea life began to disappear.

SEE IT: TOURISTS KNOCKED OVER BY HUGE WAVE WHILE TRYING TO GET 'PERFECT SHOT'

In extending the beach’s closure to at least 2021, Thai officials plan to set up appropriate sanitation systems and walkways to handle subsequent tourism, NBC News reports.

Upon reopening, officials are planning to place a limit on the number of tourists who would be able to visit on any given day, and boats would be banned from docking or mooring in the bay, instead being directed to a pier on another side of the island.

Not everyone, however, is happy about the decision: According to News.com.au, the local tourism association fears what Maya Bay’s closure means for the tourism economy.

Despite the objections, local conservationists say the current plan is already working, citing the reappearance of Blacktip reef sharks in the bay.