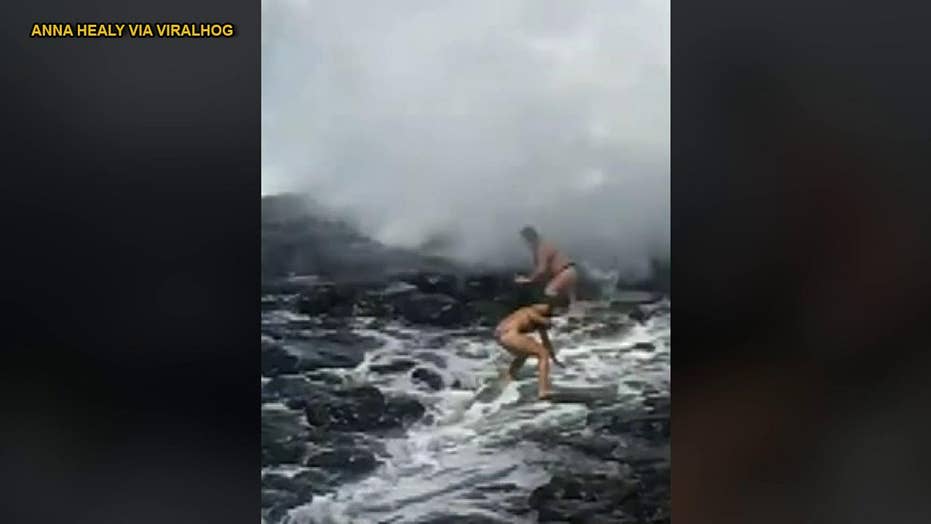 While trying to capture the perfect vacation photo, two female tourists were knocked down by not one, but two waves while posing on the jagged rocks lining the Queen's Bath tide pool on the Hawaiian island of Kauai. In a video posted to social media, the pair manage to remain upright after the first wave crashes over them, but get knocked down in a serious wipeout as the second larger wave hits. The women were not seriously injured.

Two tourists waved goodbye to their perfect picture after being knocked down by not one, but two waves while visiting the Hawaiian island of Kauai.

The unidentified women were seen posing in bikinis on the jagged rocks lining the tourist attraction Queen’s Bath tide pool. However, the idyllic spot soon turned dangerous as multiple waves crash over the women while they were snapping pictures.

In the video, the pair manage to remain upright after the first wave comes crashing down. However, once the second, larger wave comes, the two are seen getting knocked down in a serious wipeout before being carried along with the current.

Several other visitors watch as the two women get dragged out by the wave.

Footage of the photo fail was captured by a nearby backpacker and shared on social media.

“While I was traveling in Kauai, Hawaii I spent a day exploring Queen's bath, where I witnessed two girls get completely taken out by a huge wave trying to get the perfect shot,” the person who recorded the 33-second video said, Daily Mail reported.

The backpacker did say the women were not seriously injured during the incident – though the same could not be said for their camera.

“They were lucky enough to walk away with only a few bad scratches and a ticket on their car cause they parked illegally before heading down to the water; also a broken camera,” the backpacker said.