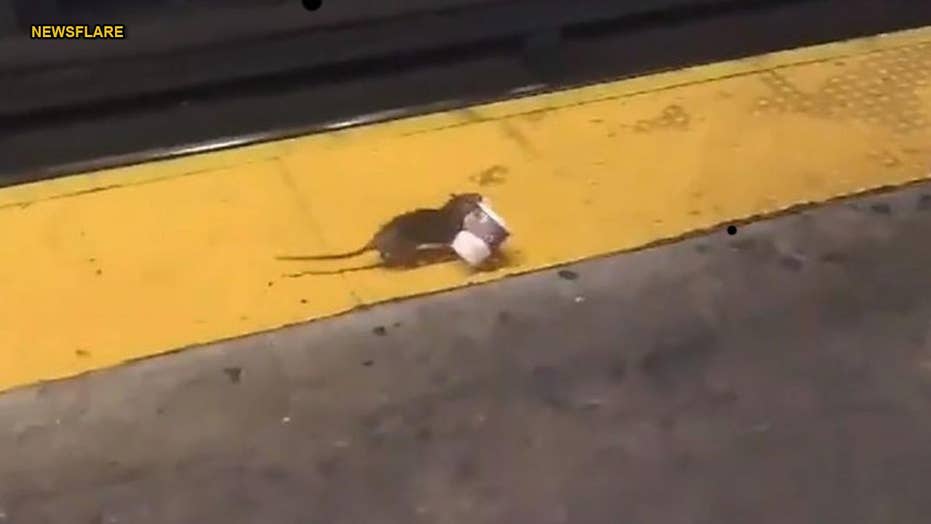 The apparent successor to 'pizza rat,' 'coffee rat' has become a viral sensation on social media. In the video, which has amassed over 63,000 views, the rat is seen dragging the small coffee cup by its teeth as it scurries across a subway platform in Brooklyn. Unsurprisingly, the rare sighting garnered many hilarious reactions online.

On New York City’s busy subway, you’re bound to see it all – but a rat carrying a coffee cup is one thing you’d least expect.

That’s exactly what one subway rider saw while standing at an MTA station in Brooklyn on Wednesday.

RAT CAUGHT EATING CHEESE IN GROCERY STORE BY SHOCKED CUSTOMER: 'THAT RAT KNOWS WHAT IT'S GETTING INTO'

In the video, which has amassed over 63,000 views, the rat – which has been dubbed #coffeerat – is seen dragging the small coffee cup by its teeth as it scurries across the platform.

“I can’t! Oh my God,” Walker says in the background.

“Best part is, he's bringing that coffee to the boss rat,” one Twitter user wrote.

“I would have jumped 5’ in the air and screamed out of fear. #coffeerat is showing the terrible state the subways are in,” another Twitter user commented. “On the flip side, I walk and talk with my coffee too! You don’t get [more] NY than this.”

Another person jokingly tweeted, “Is he panhandling?”

One Twitter user, recalling another viral video in 2017 of a subway rat carrying pizza, commented: “It's pizza rat's cousin bringing coffee to the pot luck.”