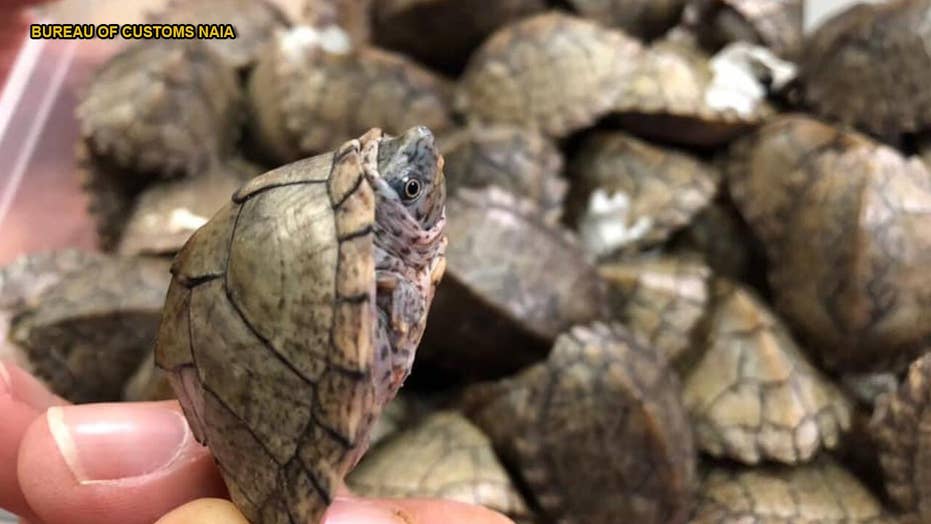 Authorities at Ninoy Aquino International Airport believe that a passenger abandoned their bags, which happened to contain more than 1,500 turtles, upon learning of the penalties associated with illegal wildlife trafficking. The turtles and tortoises, including at least one endangered species, were found abandoned in the arrivals area of the airport. The turtles may have been intended for sale as exotic pets and could have fetched as much as $86,631.

Authorities in the Philippines were likely shell-shocked upon discovering more than 1,500 turtles stuffed inside four pieces of luggage at Manila’s airport.

Officials confirmed Monday that the turtles and tortoises — which included at least one threatened species — were found abandoned in the arrivals area of the Ninoy Aquino International Airport on Sunday.

The Bureau of Customs believes the luggage and its contents were left behind after the Filipino passenger — who flew in from Hong Kong on Philippine Airlines — “may have been informed of the vigilance of Bureau of Customs against illegal wildlife trade and its penalties, thus leaving the four (4) X-Rayed luggage unclaimed in the arrival area,” the agency wrote on Facebook.

Some of the turtles had also been found wrapped in duct tape, packed within plastic bins. (Bureau of Customs NAIA)

In total, the customs department found 1,529 turtles stuffed inside the passenger’s luggage within plastic bins. Some of the turtles had also been found wrapped in duct tape, according to pictures shared by the agency.

Officials confirmed Monday that the turtles and tortoises — which included at least one threatened species — were found abandoned in the airport's arrivals area. (Bureau of Customs NAIA)

Species including the Star Tortoise, Redfoot Tortoise, Red-eared slider and Sulcata Tortoise were found in the luggage, the latter of which is listed as a threatened species by the International Union for Conservation of Nature, the BBC reports.

The turtles, which may have been intended for sale as exotic pets, could have fetched as much as 4.5 million pesos ($86,631) in total, the outlet added.

The reptiles were later turned over to the Department of Environment and Natural Resource's Wildlife Traffic Monitoring Unit, the Bureau of Customs confirmed.