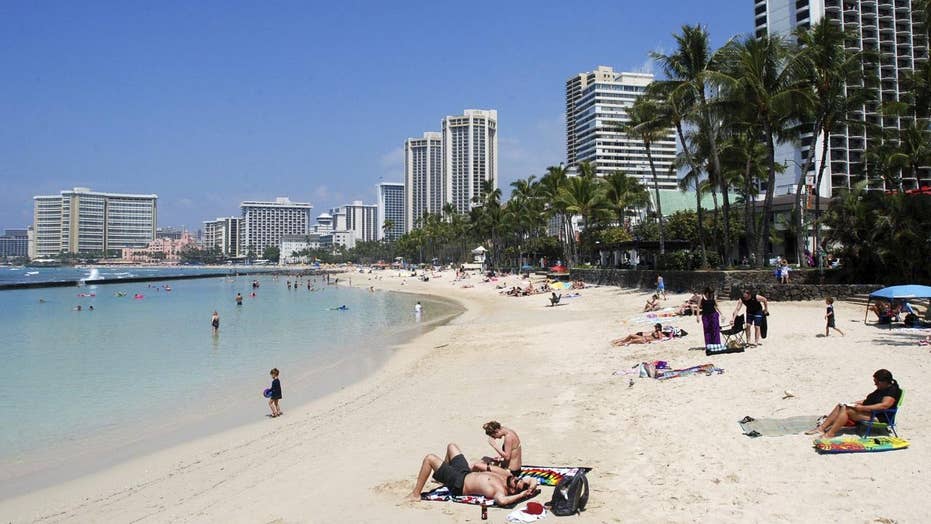 Report: Your vacation will be more expensive in 2019

New study predicts a jump in the cost of airfare and hotel rates.

Looking to live the glamorous, well-traveled life, and stir envy among your Instagram followers, but can’t afford it? Well now you can have a photo of yourself digitally altered to make it seem like you can.

A Nebraska-based photo-editing service named Fake A Vacation lets users send in snapshots to have them superimposed onto fake backgrounds. Options include a sandy beach in Maui, the rushing waters of Niagara Falls, even the Grand Canyon at sunset.

It may seem like a joke service, but lying about travel is a far more common practice than you may think.

According to a study released Wednesday that surveyed over 4,000 American adults over 18, flight cost-comparison Jetcost concluded that 14 percent of respondents fibbed to others about their flashy vacations. Ten percent of that pool even went the extra mile to post a fake on social media.

The reason? Participants claimed they felt embarrassed and wanted to impress others — such as the parents of their friends or partners, and colleagues.

But there are other reasons.

“They fake it … sometimes because the actual vacation is too expensive, so they plan this way or sometimes they do it to get others envious,” says Tom Eda, who leads marketing and support for Fake A Vacation, adding that others have purchased faux vacation pics because they had to cancel their trip last-minute.

Fake A Vacation was founded in 2017, simply because there was demand for this service.

“The need was there, and it got incremented by the upsurge of social media platforms,” says Eda, adding the company has two more products in the works to serve the market. One, FakeATrip.com, will specifically cater to celebrities and influencers. That will launch by year’s end. The other, in its early phases, is GetMeMotivated.com, which will create travel-related images for customers who are looking for trip inspiration.

Customers order their photo packages online; once it’s processed, they receive a link to send in photos. Fake A Vacation staff will suggest attire to wear in the pictures, which are then superimposed onto other backgrounds. Packages start at $19 and are processed within three business days.

Other photo services, meanwhile, offer this as just a part of their portfolio.

“About 3 percent of all the photos we’ve done are in [our] travel design book,” says Teri Llach, chief marketing officer at photo-editing and design service Krome Photos — which offers travel scenes in Parc Güell in Barcelona, hot air balloons over Cappadocia, Turkey, and Beijing’s Forbidden City. The Palo Alto, Calif.-based company — which primarily offers services for online merchants — includes these backdrops, as well as general outdoor scenes, just for fun.

“If [customers] want, we can stick them in Oktoberfest with a beer in their hand,” Llach quips, adding that sometimes people want better backdrops for photos than their driveways or kitchens.

Every photo is sent to an editor (the first one costs $3.99; every photo thereafter costs $7.99), who does the work requested by the customer. The final product is then reviewed by Krome staff to make sure nothing violates copyright.

Once received, how the images are used are out of Krome’s control.

“If [a customer has] a photo in front of the Eiffel Tower and they post it, that’s their choice,” says Llach.

Some pranksters have taken to YouTube explaining how they faked going on vacation simply for a thrill. Georgia-based user Shyla Oliver published a video in January explaining how she convinced her followers that she took a spontaneous trip to Paris, whereas she never left Atlanta.

Some of Oliver’s tactics required posting images while on a neighborhood drive saying she was on her way to the airport, as well as a video taken inside Atlanta’s airport that a friend had recorded the last time she was there.

Jokes aside, certain influencers have been called out for their practice of faking travel images — and lying to their followers.

London-based influencer Amelia Liana, who has 504,000 Instagram followers, was accused of Photoshopping herself onto inaccurate-looking destination backgrounds. One, a 2017 photo of herself atop Manhattan’s Rockefeller Center, showed the Manhattan skyline without the 2013-completed World Trade Center downtown. Another showed her lying on a bed that oddly seemed to float over London.

But Liana denied lying to her audience.

“I feel a great bond with you, my followers, and I would never wish to deceive you,” she posted on her blog, adding it was a goal for her to provide “authenticity as well as giving you imagery that is stylish, progressive and inspiring.”

More recently, at the end of 2018, Swedish influencer Johanna Olsson, who has 522,000 followers on Instagram, was criticized for Photoshopping herself badly all over Paris. For instance, one altered image made it seem like she was floating, not standing, over a bridge above the river Seine.

“Lmao girl no one is falling for your poor job at [P]hotoshopping!” wrote one follower.

Responding to the criticism, Olsson — who claims she was indeed in Paris — said: “So I did one picture, shot it and didn’t think it looked that nice … so I took a different background … and when I put it up nobody noticed so I thought, this is good.

"I just wanted to make that clear that I was in Paris, but I did [P]hotoshop the background, but I’m not going to take them down because it’s a collaboration and they’re nice pictures — it’s a good outfit!”