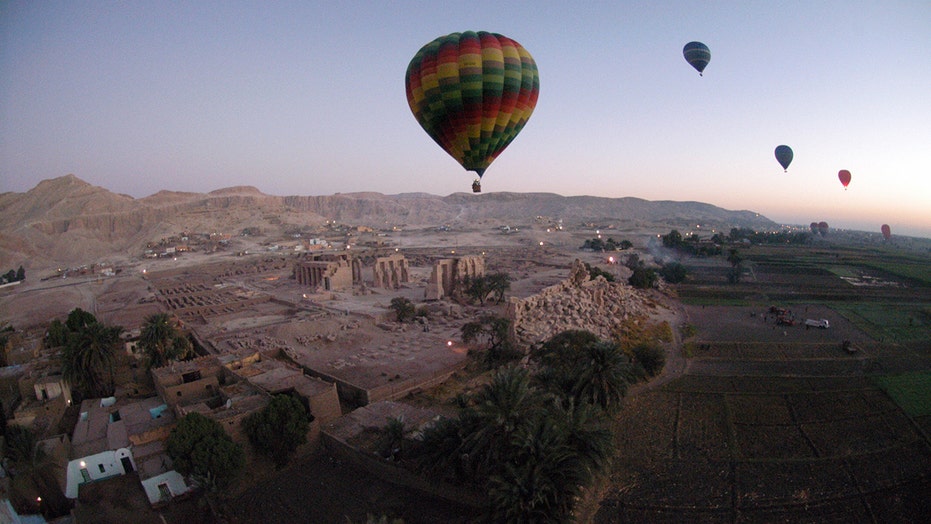 Officials in Egypt have put a temporary halt to hot air balloon rides in Luxor after a recent excursion went very wrong.

On Thursday, 11 tourists partaking in a sightseeing balloon ride over the area’s ancient temples were blown off-course by strong winds, forcing them out into the desert west of Luxor.

Nearly 360 tourists partake in hot air balloon tours over the city of Luxor and its surrounding area, as seen here in a 2007 photo. (Charles Onians/AFP/Getty Images)

SEE IT: TRAVELER ATTEMPTED TO BRING THIS 11-INCH 'BATARANG' THROUGH SECURITY

All 11 passengers – five from India, four from China, one from the U.K. and another from Egypt – were safely retrieved after a search plane located the balloon, which had landed safely after the operator regained control.

Following the incident, hot air balloon rides over Luxor were suspended while officials conduct safety inspections on the companies that run the tours, the Associated Press reported.

Thursday’s incident comes almost a year and a half after reports of a tourist who was killed after a sightseeing balloon over Luxor crash-landed while trying to navigate strong winds.

In 2013, 19 tourists also died after a sightseeing balloon caught fire and triggered an explosion in the gas canister.

A hot air balloon exploded and plunged to earth at Egypt's ancient temple city of Luxor during a sunrise flight on Feb. 26, 2013, killing up to 19 tourists.

Nearly 360 tourists take balloon rides over Luxor every day, according to the Associated Press.