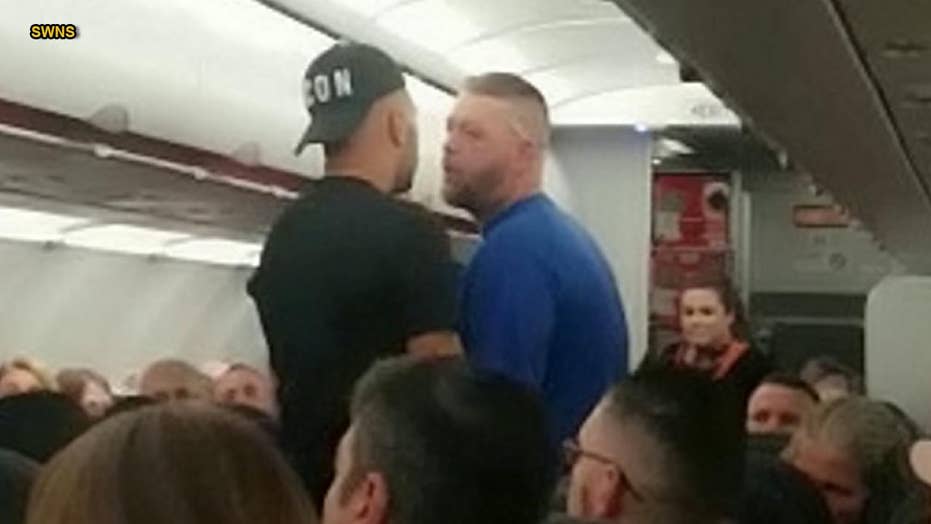 Easyjet passengers kicked off flight after throwing punches in cabin

After throwing punches and setting off a chain reaction of bad behavior on an EasyJet flight headed to Spain's Canary Islands, several men caused the plane to be diverted to Faro, Portugal. Upon landing in Faro, security removed the seven men from the flight, with footage showing officers struggling with someone on the tarmac before escorting him away.

An EasyJet flight headed to Spain’s Canary Islands made an emergency landing in Portugal after several men reportedly started throwing punches on the plane, setting off a chain reaction of bad behavior.

The fight reportedly broke out on Thursday afternoon, only a few hours after the flight left from Manchester, England, for Tenerife. According to witnesses, four men caused a commotion when they started fighting in the back of the aircraft, leading a flight attendant to move one to the front.

The solution didn’t last, however, as the man then ran back to his original seat and resumed fighting with the other men, according to SWNS.

Footage from inside the cabin shows a flight attendant try to break up a tense confrontation between two men, while passengers look on and shout at the two angry fliers to stop.

The fight originally broke out at the rear of the plane before the men were separated. A witness says they resumed fighting after a little while, prompting the pilot to make an unscheduled stop in Portugal. (SWNS)

“There's children on the airplane!” one woman can be heard yelling.

Another voice alleges that one of the men “f---ing spit at a woman,” while others remarked on the “disgusting” act.

“No respect whatsoever,” a voice adds.

"Things first kicked off when the group at the back got into a fight. Punches were thrown, and the stewardess broke them up,” a witness told SWNS of the original altercation.

"But then they kicked off again, and passengers actually intervened to calm them down. One woman got in the way, but a guy spat in her eye. It was disgusting,” he explained.

Once the crew announced the flight would be diverted to Faro, in Portugal, another group of men — believed to be traveling with a bachelor party — allegedly made things worse by complaining very loudly to the flight attendants, and even confronting some of the men from the original altercation, according to SWNS.

"One of the guys got into trouble when he started pinching drinks from the front of the plane,” the witness claims. “It was bedlam.”

Upon landing in Faro, security removed the seven men from the flight. Footage shot from inside the plane then shows officers struggling with someone on the tarmac before escorting him away.

A total of 7 men were escorted from the plane. Footage from inside the cabin shows security struggling with one of the men before leading him away in handcuffs. (SWNS)

A representative for EasyJet was not immediately available to confirm whether the men were arrested, although the airline has since called the group’s actions “unacceptable” in a statement shared with SWNS.

"We take this matter very seriously and we are liaising with the relevant authorities,” the airline confirmed.