Miracle on the Hudson pilot on 'Fox &amp; Friends'

Sully apparently wants the Department of Transportation to tighten its leash on emotional support animals.

Capt. Chesley ‘Sully’ Sullenberger, who safely landed a US Airways flight on the Hudson River in 2009, in what became known as the "Miracle on the Hudson," has shared his support for the Association of Flight Attendants-CWA (AFA), who recently called upon the DoT to set clear standards for the classification of emotional support animals.

Retired pilot Chesley B. (Sully) Sullenberger III said on Twitter that "passengers too often bring aboard flights animals that should not be on an airplane." (Robert Daemmrich Photography Inc/Corbis via Getty Images)

The AFA’s statement came in response to a July 22 incident, during which a flight attendant on an American Airlines flight — operated by Envoy Air — was bitten in the hand by an emotional support dog between Dallas and Greensboro, N.C. He subsequently received five stitches.

“Passengers too often bring aboard flights animals that should not be on an airplane. This must stop,” Sullenberger tweeted at the AFA on Friday evening, along with a link to a USA Today article on the incident.

The Tuesday before, the AFA — which represents over 50,000 flight attendants across 20 airlines — had called upon the DoT to “take action” in regards to “setting standards for emotional support animals.”

“What happened on [the July 22] American Airlines flight is completely unacceptable and inexcusable,” the statement read. “For years, AFA has supported the role trained animals can provide to passengers in the cabin, but we have also called for action in regards to setting standards for emotional support animals.

“We need the Department of Transportation to take action now, so events like the one that happened yesterday do not continue to occur on our planes. This is fundamentally about maintaining safety, health and security for passengers and crew, while ensuring accessibility for those who need it.” 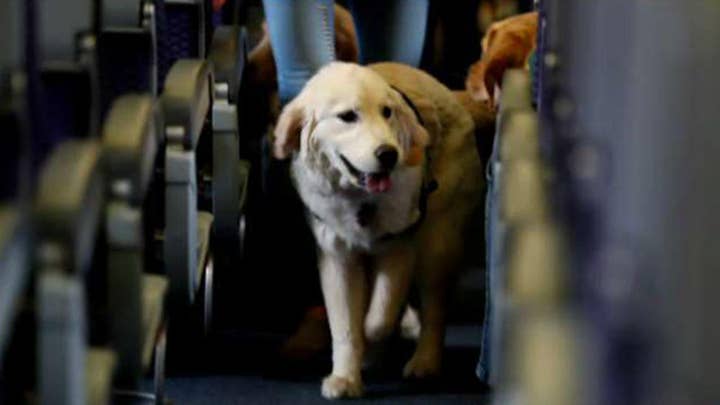 The subject of emotional support animals on planes has proven to be one of the most hotly debated travel topics of the airline industry, perhaps sparked by the emotional support peacock named Dexter, who was rejected from boarding a United Airlines flight in January 2018.

Various carriers have been tightening the leash on their respective rules regarding the transportation of both companion and service animals in the sky.