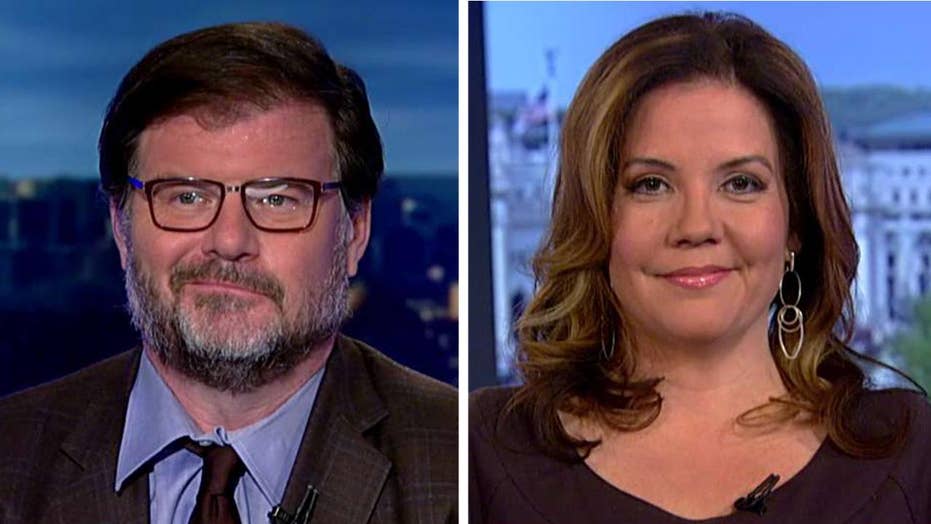 The politics of Trump's tough love for NATO

This is a rush transcript from "Special Report with Bret Baier," July 11, 2018. This copy may not be in its final form and may be updated.

PRESIDENT DONALD TRUMP: Many countries owe us a tremendous amount of money from many years back where they are delinquent as far as I'm concerned, because the United States have had to pay for them. So if you go back 10 or 20 years, you just add it all up, its massive amounts of money.

Germany, as far as I'm concerned is captive to Russia because it's getting so much of its energy from Russia.

ANGELA MERKEL, GERMAN CHANCELLOR: I want to say that I've experienced myself a part of Germany controlled by the Soviet Union, and I'm very happy that we are united in freedom as the Federal Republic of Germany and can thus say that we can determine our own policies and make our own decisions.

MIKE EMANUEL, FOX NEWS: President Trump giving it NATO and Germany specifically a little tough love. Let's take a look at contributions of NATO countries in terms of their percentage of GDP. The United States, 3.5 percent, Greece, 2.27 percent, Estonia, 2.14 percent, United Kingdom, 2.1, and Latvia, two percent. The rest under that. Let's take a look at the NATO defense spending as share of GDP, U.S. versus Germany. U.S. 3.5 to Germany 1.24, and that may give you a little sense of why the president went over there with a tough message.

With that, let's bring in our panel: Jonah Goldberg, senior editor at National Review; Susan Page, Washington bureau chief at USA Today; Mollie Hemingway, senior editor at The Federalist. Nice to see you all. Mollie, your thoughts on the president's message today?

MOLLIE HEMINGWAY, THE FEDERALIST: The president is giving a message that previous presidents have given as well. It's something we've heard for decades, this frustration with how NATO member countries aren't giving as much as they should towards defense.

It's really interesting. They claim that they view Russia as this huge threat but they don't spend money as if they view Russia as a huge threat, and when they do spend their money on defense, they don't actually do it in a very strategic fashion, usually using their defense dollars a sort of a welfare program. And then you see them working with Russia on this energy pipeline. They are not behaving as if it's a big concern.

And this is an issue for us because we have a lot of military objectives across the world. Europe is not the priority that it was in 1949 when we created NATO, and so their lack of support for their own mission is very disconcerting.

EMANUEL: It's pretty interesting must-see TV seeing the president get into it face-to-face with face with the NATO secretary general. Take a listen to this.

TRUMP: It's disproportionate and not fair to the taxpayers of the United States, and we are going to make it fair, so that will be it. And I want to just complement the secretary general. He's worked very hard on this problem. He understands it better than anybody.

JENS STOLTENBERG, NATO SECRETARY GENERAL: Your message is having an impact, and we are going to build on that to make sure we have further increases. You initiated that all allies are going to develop national plans on how to spend more on defense.

EMANUEL: Susan, your reaction to what we saw today?

SUSAN PAGE, USA TODAY: That's definitely a diplomat talking after really getting savaged by the president at that breakfast. It's entirely true that both of these concerns about the gas pipeline and about the levels of defense spending by NATO countries has been an item of concern for a series of U.S. presidents, including President Obama, who tried to work on this issue and got agreement for a two percent level over the next 10 years in an agreement reached in 2014.

I think what makes this different is the president's tone, which seems to put -- it's so much more disruptive than the criticism that previous presidents have made, and it raises questions about whether we have a commitment to the alliance that transcends differences over things like levels of defense spending.

And the concern I think of some leaders and critics, including some of the Republicans we heard in the Senate, including Senator Corker, is that the president is not conveying support for this alliance that has served us well for seven decades.

EMANUEL: We also had the president comment on his meeting with the German chancellor. Take a listen to this.

TRUMP: We are having a great meeting, and we're discussing military expenditure. We are talking about trade. We have a very, very good relationship with the chancellor. We have a tremendous relationship to Germany.

EMANUEL: So Jonah, is that the president giving both the carrot and the stick?

JONAH GOLDBERG, NATIONAL REVIEW: I guess. For German domestic politics, I'm not sure it helps Angela Merkel all that much for Donald Trump to say he's got a great relationship with her. I agree with everything Mollie says about this is a historic -- there are deep historic precedents about defense spending in Europe. A lot of these countries haven't been pulling their weight. I don't know that they owe us back dues or anything like that. And I also think there is a very well-established finding in the historical literature that when Germany starts investing a lot in its defense budgets, there are some problems that come with that.

Still, I think the problem here with a lot of this stuff is, what is the end game? If the end game is really the president, as some people in the White House are saying, is just jawboning the allies to pony up more, great. But if you look at almost every single multilateral institution that the United States is part of, most of which it helped build and create, he seems to have a lot of animosity for all of them. He says the E.U. is worse than NAFTA. He says NATO is bad. He says we got out of TPP. All these trade agreements, he wants these unilateral things. And yet we haven't gotten an end game about what is going to replace all these institutions that he shaking up. In some way it might just be he's disrupting everything without a strategy, but what's going to replace it. But if there is an end game like they say there is, maybe it will be fine.

EMANUEL: I know I've been to Afghanistan several times and there have been NATO troops serving alongside our men and women and making sacrifices. And so I think some of the folks on the Hill want to make sure that that is noted as well, the appreciation of the American people.

HEMINGWAY: I do think the burden of proof at this point is on people who think that NATO is doing a good job. NATO was created for a very particular purpose, and it did that job very well, keeping the Soviet Union at bay. Since the Soviet Union collapsed, it hasn't really had a mission that has made sense. They've had some democracy building, dealing with Balkans, some of their projects have gone well, some haven't. I think that it's time for people to really think about what the alliance is for and how it can do good work, and again reminding people that we have a lot of issues in the rest of the world. It can't be the priority that was for those seven decades.

EMANUEL: They did invoke Article Five and come to our aid on 9/11 and joined us in a war on terror around the world.

HEMINGWAY: This is a good point. Article Five, which says that we will defend any country in NATO just as if someone had bombed Lincoln, Nebraska, is a really important thing. It was a really good when it was 12 countries that were in NATO. And now it's many dozens of countries. It seems like we are adding countries all the time.

Are we really, as a country, do we really want to defend Montenegro in the same way we defend Lincoln, Nebraska? And if we're not, maybe we should reevaluate that and think about whether we should really have an understanding about where our priorities are and make our word solid.

PAGE: Although I think Russia has given NATO a new agenda by fighting a proxy war in Ukraine, by meddling in western elections, by assassination attempts in Britain and elsewhere. So if there's a thing that's unifying the rest of NATO, that would be concern about Russia's behavior. And we're going to see at the summit in Helsinki on Monday whether the president shares some of those concerns.

HEMINGWAY: And again, this is why it's so curious that Germany is working to become dependent on Russia for its energy at the same time claiming that Russia is this huge lie. You don't want to be in a position where Russia can actually control your resources, your economy, and keep you --

PAGE: It's an item of great concern ever since that gas pipeline was announced.