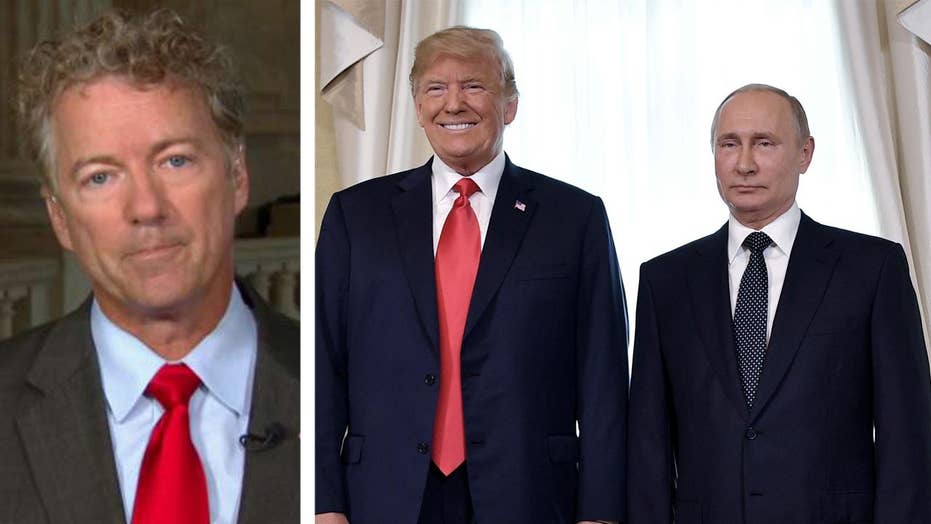 Republican lawmaker from Kentucky says the U.S. is renewing engagement with Russia.

This is a rush transcript from "Your World," July 16, 2018. This copy may not be in its final form and may be updated.

NEIL CAVUTO, HOST: All right, to hear many on Capitol Hill tell it, the president threw the United States under the bus.

That might be a bit extreme, but not sticking up for the intelligence community, including his own intelligence people, that the Russians were trying to monkey around in our 2016 election, not that it had any influence on the final result, but it just made us look bad, Vladimir Putin look good.

Want to get the read from Kentucky Senator Rand Paul, a member of the Foreign Affairs Committee, among others.

Senator, what did you think on that point? Do you think the president threw America under the bus?

SEN. RAND PAUL, R-KY.: I think we need to take a step back and ask ourselves, is it good to have conversation with your adversaries? Is it good to have open lines of communications with Russia?

Look, we’re at war in Syria, and our planes are flying in the same airspace. We need to make sure that we’re trying to avoid accidental war. And so I commend President Trump for taking this meeting.

CAVUTO: All right, so, on that instance, it was a good thing to do. And you’re quite right. We can’t pick and choose our leaders, nefarious or otherwise.

But the fact that he still harbors this view, that is, President Trump, that he doesn’t think that the Russians -- or takes Vladimir Putin at his word that the Russians did interfere, is it because he’s afraid that it will look like he’s a compromised president? I mean, most experts seem to concur that, despite this involvement, it didn’t change the results.

PAUL: I think what is hard is, is that when you look at our intelligence community over the last several years, it was led by people who have turned out to be ranked partisans and, frankly, dissemblers and liars.

I mean, James Clapper -- James Clapper came before the Senate and perjured himself. He committed one of the biggest lies of a head of intelligence have committed in recent times. He said we’re not collecting all this information on every American. It turns out, yes, that’s exactly what they were doing. He lied to us.

CAVUTO: But Senator, Dan Coats, his own intelligence guy, is acknowledging that much, that the Russians were involved.

CAVUTO: Do you think the Russians were trying to screw around in the election?

PAUL: Yes, I think the -- the people we have indicted in all likelihood were people that were meddling somehow in the election.

But I would also put it in perspective. I think we have gone a little deranged as far as over the top on this thing. Dov Levin looked at this from the Carnegie-Mellon University. And he looked between 1946 and 2000, and he said there were 81 instances of the U.S. meddling in elections, and 36 of Russian meddling in elections.

So what we should do is try to protect the integrity of our election, make sure ours is decentralized, protected, do everything we can.

But the other thing we should mention to the Russians, Putin says, oh, we can’t have any engagement because of this. Well, they ought to think twice about trying to get involved in our election again, because it’s made it impossible for us to make progress on things.

So, when I talk to the Russians, that’s what I say to them. I can’t prove whether you did or didn’t, but think twice about it because you have messed it up as far as trying to get any kind of progress on North Korea, Syria, Ukraine.

CAVUTO: But don’t you think the president, maybe unintentionally, Senator, but emboldens them when he says, all right, if this is what Putin says, we will move on?

PAUL: No, I think they’re -- they’re smart enough to know that it has set relations back a decade or more.

It’s almost impossible for any kind of lessening of tensions right now because of what they did in the election.

And so, yes, that is known, but then some on the Democrat side, I think, are just so crazy in their hatred of Trump. Look at John Brennan. John Brennan is out there calling the president a traitor.

John Brennan was in charge of collecting information on every American, on every person in the world. He had this tremendous power to spy on the entire world. And now turns out he’s a deranged Trump hater?

That should concern us and make us think that we need to have checks and balances on our intelligence community, because this is just too much power. For people like James Clapper and John Brennan to have that kind of power scares me to death.

CAVUTO: So, when you hear that it’s not just someone like John Brennan, but Senator John McCain, saying that the president debased himself before a tyrant, what did you think of that?

PAUL: You know, John McCain has been wrong on just about every foreign policy decision over the last 40 years.

I will give you an example of John McCain being completely out to lunch on this kind of stuff. I have opposed the expansion of NATO because I think it’s unnecessarily provocative.

And I think that I agree with George Kennan, who was one of the greatest diplomats of the last century, who said that if we expand NATO into Eastern Europe, you will have the rise of nationalism and militarism in Russia. He predicted the rise of Putin.

And so when I opposed adding Montenegro, little Montenegro, to NATO, John McCain said I was working for Putin.

This is the dumbing down of diplomacy, the dumbing down of foreign policy. John McCain wants to call people names and say, oh, you’re working for Putin. The Democrats are doing the same thing. Everybody is a traitor. Everybody -- they have got something on the president, instead of saying, you know what, maybe the president honestly wants less conflict in the world and less likelihood of war. And I believe that to be true.

CAVUTO: If I can switch gears a little bit, Senator, with Brett Kavanaugh, you had your doubts about him when he among the names being bandied about as a possible replacement for Justice Kennedy.

Now we know he is. How do you feel about him now?

PAUL: I haven’t decided how I’m going to vote yet.

Well, that basically guts the Fourth Amendment. So I’m very, very disappointed. I’m worried that he will cancel out Justice Gorsuch’s vote.

But President Trump did pick someone very good in Justice Gorsuch, who is great. He’s now the leading voice on the Supreme Court on privacy.

But I’m worried Kavanaugh won’t be. But I also have to put this in perspective. This could be a Clinton nominee. So, I have to overall say, as much as I disagree on the Fourth Amendment, how would I judge this overall candidate compared to an Obama appointee or a Clinton appointee?

CAVUTO: Real quickly, sir, do you think that he will get approved, regardless of your own views?

PAUL: Yes, I think it’s leaning in that direction. I think we had several Democrats who voted last time.

PAUL: We have got at least five or six Democrats running for their lives. They live in states that Trump won between 20 and 40 percent.

And I think they feel the pressure much more than anybody up here. So I will be surprised if four or five Democrats don’t vote for him, actually.