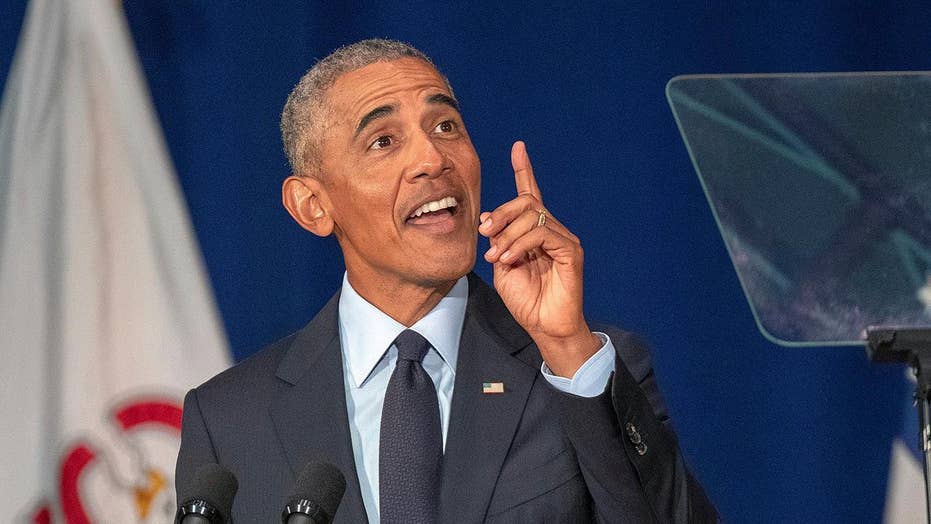 Obama returns to the campaign trail

Former President Obama speaks at a rally ahead of midterms; reaction from the 'Special Report' All-Stars.

This is a rush transcript from "Special Report with Bret Baier," September 7, 2018. This copy may not be in its final form and may be updated.

PRESIDENT DONALD TRUMP: We have the best economy in history.

FORMER PRESIDENT BARACK OBAMA: When you hear how great the economy is doing right now, let's just remember when this recovery started.

TRUMP: More than four million jobs created since the election.

OBAMA: It did not start with Donald Trump. He is a symptom not the cause. He's just capitalizing on resentments that politicians have been fanning for years.

TRUMP: I'm sorry, I watched it, but I fell asleep.

BRET BAIER, ANCHOR: Former President Obama getting into the campaign swing as current president Trump responds almost real time. Let's bring in our panel and start there: Jason Riley, Wall Street Journal columnist and senior fellow at the Manhattan Institute; Mollie Hemingway, senior editor at The Federalist, and Charles Lane, opinion writer for The Washington Post. It was former President Obama's first kind of going out there, specifically targeting President Trump. Your thoughts on his message and how it translates?

JASON RILEY, WALL STREET JOURNAL COLUMNIST: Well, he might be the best thing the Democrats have going for him. He's still extremely popular in the party and in the country, frankly. And he's going to give it everything he's got for the midterms. So I'm not surprised to see him do this.

MOLLIE HEMINGWAY, THE FEDERALIST: I just want to say that that is an important point. We're told that Donald Trump is the only person who violates norms or does anything differently. And we do have a norm in this country that presidents usually speak well of their successors. You saw George W. Bush did that.

BAIER: Or they're silent.

HEMINGWAY: Or they're silent. George W. Bush did that through all eight years of the Obama presidency. It's an absolutely free country and people should be free to say whatever they want, but I think a lot of people notice that people seem to be breaking a lot of norms along with President Trump.

And it is good for the Democrats to have someone like Obama coming and trying to rally the vote. But in the same way that President Trump seems to excite both his base and his opponents, the same is absolutely true for President Obama. People in the Democratic Party love to hear him speak. People in the Republican Party are reminded why they voted for Donald Trump or what they didn't like about President Obama.

CHARLES LANE, THE WASHINGTON POST: Well, the catch-22 in a way for President Obama is that if he were to go out on the campaign trail and not mention Donald Trump no one would be interested because the whole election is a referendum on Donald Trump. And the most motivating campaign theme for Democratic voters is resistance to Donald Trump. So, in a way, there's no point campaigning unless you break this long-standing norm because it's the only issue in the campaign.

I tend to agree with I guess both of my colleagues that it's possibly a net plus for the Democrats to have them back on the trail particularly among African-American voters who are going to be a key part of the coalition in some of the Southern states. So I think we're going to see more of him.

BAIER: Here he is talking about the media.

OBAMA: But you never heard me threaten to shut them down, or call them enemies of the people.

BAIER: Now, he had some interesting lines there, Jason. This is not what-aboutism, it is just truth. His attorney general obviously called one of our reporters a co-conspirator, James Rosen, and a flight risk. And there are different things here that you have to fact check. We are trying to fact check to the current administration. But that speech, there was some interesting moments.

RILEY: Well, I guess the biggest pushback I would have to what President Obama said was that he didn't have to worry about criticism coming out of Fox News because he had every other network in his pocket for eight years, just like previous Democrats have had. So the idea that he wasn't overly concerned with what Fox was saying to the extent that it was true, and as you just said it's not entirely true, when you have every other major news organ in the country on your side, yes, you don't to have worry about these things.

BAIER: That doesn't exclude the enemy of the people rhetoric from the president.

LANE: Look, coming from a newspaper that's taken its share of blows, fair and unfair, from -- mostly unfair I would say, from this president, I would say what I think independently of what he said about Fox here and there, it is a fact, can you look it up, that Barack Obama repeatedly told audiences that they should read both the New York Times and the Wall Street Journal editorial page. He said you should watch this network, you should watch that network, you should try and get both sides, you should get outside of your bubble. He told student groups, I believe Howard University was one, he rebuked them for not permitting certain controversial speakers. He supported the idea that conservatives should have free speech on campus, I think repeatedly stuck his neck out. So I don't really think there's any comparison on that point.

HEMINGWAY: That is not my recollection of the eight years under President Obama.

LANE: He said all of those things.

HEMINGWAY: He blamed many bad things in the country on people watching FOX News. He claimed it was on every bar in the country and that's why Democrats were hurt. He tried to freeze out FOX News in multiple instances. He spied on reporters. He's one of the worst president when it comes to actual actions when it comes to the media.

LANE: I believe when FOX was, quote-unquote, frozen out of the White House correspondence, Bret, you check me on this, the rest of the media came to FOX's defense.

BAIER: As Fox did recently to CNN.

HEMINGWAY: When it comes to actual actions taken and attempts to spy on reporters or to after them, the Obama administration was very bad. And the media didn't have the same reaction to it that they do to the Trump administration.

BAIER: I want to turn topics, really quickly, and that is the president saying that the attorney general should be investigating who the author of this op-ed, anonymous op ed is. Jason?

RILEY: No, I disagree that the attorney general should spend time doing this, Bret. I think that the president is legitimately concerned that someone supposedly in his inner circle has done this. It's something I'd be upset about, too, all of us would. But whether it rises to the level of an investigation by the attorney general, I don't that's the case.

HEMINGWAY: But the attorney should be investigating all the leaks that we have seen coming out of this administration for two years that go against the Trump administration. And that's something we haven't seen any evidence that there's been any investigation of the criminal leaking against Mike Flynn offense.

LANE: Poor Jeff Sessions cannot get a break. The president just keeps on trolling him and harassing him, giving him more impossible things to do.

BAIER: Although he said he's going to make it through the midterms at least is what he has said.