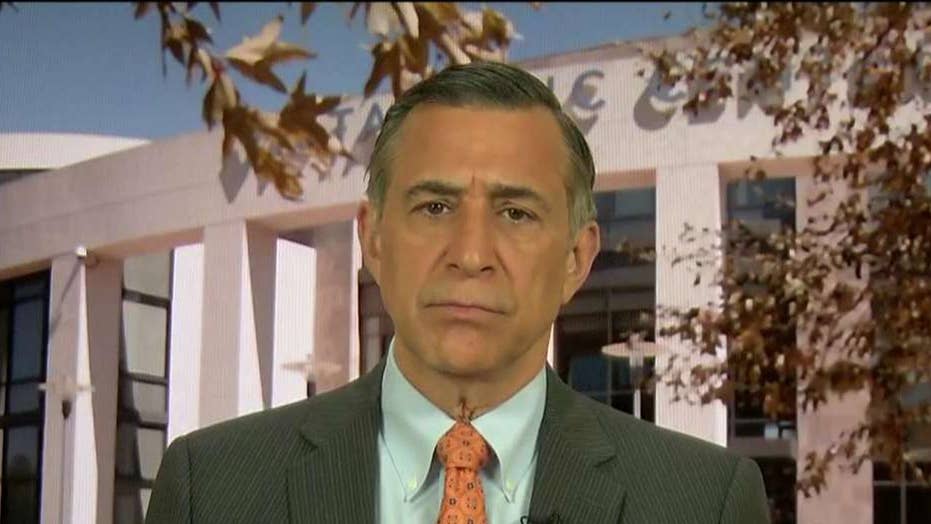 This is a rush transcript from "Your World," April 17, 2017. This copy may not be in its final form and may be updated.

VICE PRESIDENT MIKE PENCE: Just in the past two weeks, the world witnessed the strength and resolve of our new president in actions taken in Syria and Afghanistan.

North Korea would do well not to test his resolve or the strength of the armed forces of the United States in this region.

TRISH REGAN, GUEST HOST: Vice President Mike Pence using those strikes against a Syrian air base and the Mother of All Bombs against ISIS to put North Korea on notice, saying -- quote -- "All options are on the table."

Is this tough talk enough?

Good to have you here, Congressman. Welcome.

REGAN: In other words, is North Korea going to listen to us when we start talking like that, given what we have just done?

The real pathway to North Korea is through Beijing. And I think that's where President Trump in his meeting with the premier and additional correspondence going back and force is going to begin to make a difference.

Additionally, I think Congress is looking at sanctions against Chinese banks doing business with North Korea.

REGAN: So, China is the key here. Then perhaps some of this tough talk is meant for China?

ISSA: It's meant to make it clear, in my opinion, that a measured response will occurred in retaliation of North Korean actions.

But those responses might, quite frankly, in a non-military sense, be against China. You know, Trish, ever since 1950, and after the Inchon landing, we have been facing China as a protectorate of North Korea.

And for those 67 years, it's really been about China being responsible for the actions of North Korea. You know, people in North Korea are inches shorter than people in South Korea. And that's because China hasn't seen that that government serves its people. And I think that's where the new sheriff in town is going to use both diplomatic and military means to make it clear that we're just not going to tolerate the status quo.

REGAN: Well, I mean, a lot of people have pointed to that evening in Mar- a-Lago when, you know, the Chinese premier goes back to his hotel room essentially and sees that we have just sent 56 Tomahawk missiles over into Syria.

That has got to have some kind of influence, one would think, on him and his thinking, all the while knowing, by the way, Congressman, that Donald Trump didn't actually label China a currency manipulator, as many thought.

ISSA: Well, I think that President Trump is dealing with the facts as he gets them from very knowledgeable people in the administration and other experts. And you're seeing this.

Pragmatically, we cannot allow the status quo to continue, because that is endangering all of our allies in that region.

REGAN: Let's talk a little bit about the Middle East. You just returned from that region.

Former Afghan President Karzai came out and said this Mother of All Bombs being dropped on that eastern region in Afghanistan, where we were able to take out so many ISIS fighters, was an atrocity. "Atrocity" was the word he used.

What is your reaction, Congressman?

ISSA: Well, first of all, we were attacking tunnels with IEDs and bomb- making capability inside them that had killed many Americans and Afghans.

Look, I don't normally disparage world leaders. But Karzai was put in power by this government, by the U.S. government. He stole his own country blind, put billions into his and his family's coffers, and has gone into retirement, only to complain that somehow the country he failed to care enough about getting right, that is still a mess, that is still a bastion of terrorism, somehow, he bears no responsibility.

Quite frankly, he was a failed first president of that country. And he was most failed mostly because he was more interested in lining his and his families' pockets, which he did to the tune of over a billion dollars.

REGAN: Unfortunately, we see that too often perhaps in that part of the world.

Let me just ask your thoughts on Bashar al-Assad and how long he stays there, and whether the Russians will continue to support him and prop him up given, all that we have discovered and all that the world has seen.

That being said, the transition from an Assad government to a government that treats its people better, fairer, that protects minorities, including Christians, is going to be a difficult one. And it's one in which the most important thing is not the elimination of Bashar Assad.

It's the prevention from ISIS being the replacement, that a much more wealthy potential nation shouldn't be dominated by any extremist group, whether it's Hezbollah on one side or ISIS on the other. And that's where I think the administration has to take a very different approach.

They're beginning to do so. They're listening to people who understand the region, something that, quite frankly, the last administration was unwilling to do.

REGAN: Congressman Issa, so good to have you here live.

REGAN: Thank you for being here. All right.