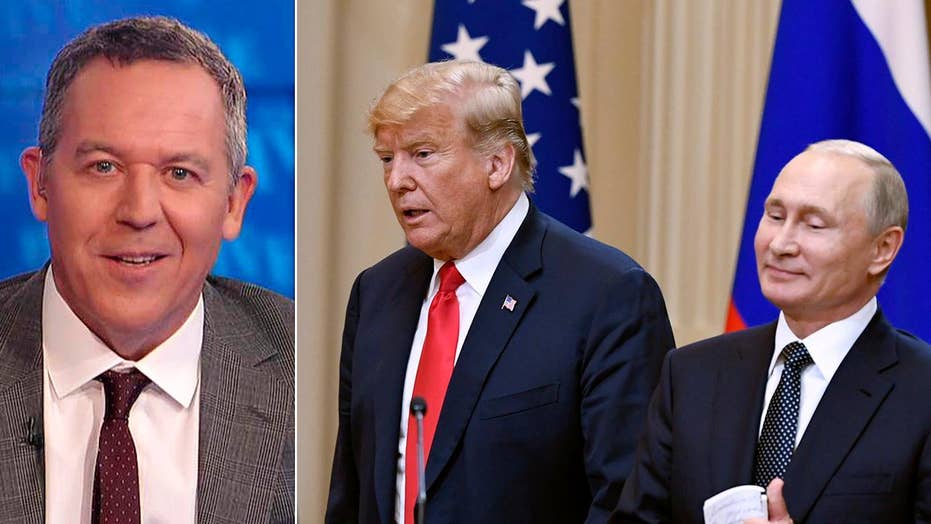 Gutfeld on Trump’s presser with Putin

If President Trump is a Russian plant, he's the worst plant ever.

The world must be ending, meaning it's Tuesday on cable news.

JILL WINE-BANKS, MSNBC CONTRIBUTOR: It's just as serious to me as the Cuban missile crisis in terms of an attack or the 9/11 attack. I would say that his performance today will live in infamy as much as the Pearl Harbor attack or Kristallnacht.

PHILIP Mudd, CNN ANALYST: Curious point in American government. When do we see almost a shadow government come out and say we cannot side with the government, whether it's the Cabinet or the Senate?

Amazing. CNN is literally seeing shadows now. I think there's medication for that.

Now, Trump addressed the controversy today and we're going to get to that, but if he's a Russian plant, he's the worst one ever. I mean, what kind of plant would try to force Germany to cancel its Russian oil contracts? Oil being Russia's only major export besides spies.

What kind of plant would demand that NATO up their military spending to straitjacket mad Vlad?

What kind of plant boosts our military by billions which allows us to do whatever the hell we want until forever?

I say an awesome plant.

Seriously, you've got to be nuts if you think he's the Manchurian candidate. John Brennan does and he voted for a commie at the height of the Cold War. I guess he's the expert. Maybe Trump should have talked tough but sent a few billion dollars to Moscow on pallots instead.

So Donald lost the crazy pants vote, so what? The world is Donkey Kong and we're always stuck at the same level, especially with Russia. But perhaps, like North Korea, this could be different. Putin is a thug, but you can still chat with a thug while racking up points in his own backyard. Trump played nice, may be too nice, despite the media screeching for a cat fight, but I say smile at Putin's faced then screw him if you must everywhere else.

Maybe Trump should have skipped the presser altogether. But ask yourself this, if your TV was off and you're never heard about this story, would you have noticed anything different in your life? Just that it was gradually getting better: jobs, the economy, taxes, terror. Trump is winning on a lot of things. But even if you're winning, you can always do better.