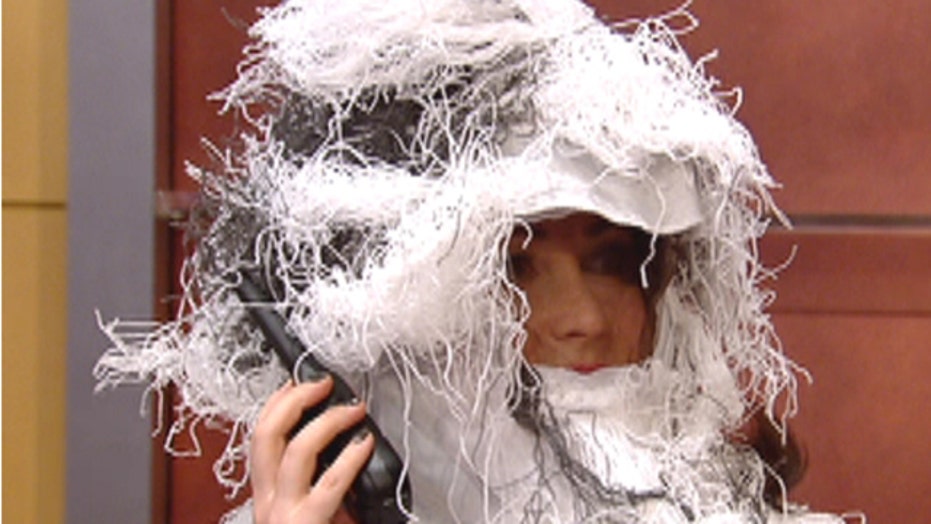 How to catch a glimpse of Kris Kringle

Santa stakeout kit may get the job done

For a mere six and half thousand dollars, the state-of-the art Santa Stakeout Kit with tactical and hunting gear can be yours this Christmas.

To catch a glimpse of Santa, kids of all ages, from 5 to 50, need to be prepared.

For centuries, Santa has avoided detection in his worldwide, one-night gift-giving spree. But the Santa Stakeout Kit will help level the playing field and give you a tactical advantage in spotting the jolly old guy from the North Pole.

The kit has everything you need for Mission Spot Santa operations both outside and indoors, from camouflage, walkie-talkies and a thermal imager through to hearing amplifier, tactical distraction balls and motion detection cameras.

To Catch Santa Claus Outdoors
After picking the right snow bank, you will need the right camouflage to blend into the environment. To conceal yourself, the kit includes the winter OPMOD Ghillie suit and an eliminator blind with a winter cover.

To help you see Santa in the dark, the compact Surefire P2X Fury Flashlight provides a whopping 500 lumens of light.

If you’re working as a team with a sibling or some neighborhood kids, it will be important to communicate, so the kit includes Uniden Two-Way FRS/GMRS Walkie-Talkies, available in Christmas red.

Beating the Cold with Rations and Gear
It could be a long cold night on your Santa Stakeout, so it is a good idea to bring some snacks. The kit includes a Neverlost Food Thermos to keep your hearty soup warm. And no self-respecting stakeout would be complete without hot chocolate, or hot toddy for supervising parents, so the kit’s leak-proof thermal mug by Primus C&H will make sure your beverage of choice stays warm.

It can get very cold out there in the winter weather, and it’s important to keep shivering at bay, since any movement could expose your position to Santa.

So the kit includes hefty socks, a parka, tactical gloves, a Zippo hand warmer and more.

Once you’re out of sight, you can use the Pro Hear IV BTE Digital Hearing Device to make sure you hear Santa ho-ho-ho’ing as he approaches and hear those reindeer hooves landing on the roof.

The Pro Hear IV is an excellent enhancer that amplifies in high quality sound.  It can also be programmed to remember different sound environments.

Speedy Santa Solutions
To make sure gifts get to kids all over the planet, Santa has to be quick; he can arrive on a roof, drop down the chimney, leave some gifts, enjoy a snack of cookies and milk and vanish in the blink of an eye.

So you’ll need the kit’s FLIR Scout PS-24 Thermal Camera, so you can scan your backyard and find his heat signature even in the dark. You can use this thermal camera both outdoors and indoors, when you’re hiding in the dark awaiting Santa’s chimney arrival. Compact and less than one pound, this device is light enough that kids can scan with minimal arm fatigue.

Catching a Glimpse of Reindeer
Who wouldn’t want to catch a glimpse of Rudolph and his buddies? It is critical to stay concealed, but you need a way to draw Santa and his reindeer over to your home.

For that, the kit includes Cass Creek Triple Heat Female Deer in Heat Scent. Open this little bottle and Santa’s reindeer will think there are three different does -- that would be girl deer -- and they won’t be able to resist investigating.

To Catch Santa Claus Indoors
For staking out Santa indoors, the kit includes some gear to help keep you comfortable. On the long watch you can use gear like a soft hammock pillow, blanket, and a sleeping bag while you nestle in your hiding spot.

Once you have lured Santa to hang around for some cookies, that’s your chance to distract him and capture some photo evidence.

The Brite Strike Technologies Tactical Balls were designed to distract criminals … but they can also be useful for Santa spotting.

The lightweight tactical light balls can be rolled toward Santa to distract him.  Particularly effective in the dark, the Brite Strike tactical balls have an uneven weight distribution that makes them wobble and spin in random patterns while springing light upon your target.

Once you’ve got Santa curious and illuminated with the tactical balls, you can deploy your Canon EOS Rebel T4i Digital Camera Kit to photograph him in 18 megapixels.

Santa can appear and vanish in the blink of an eye, so this camera will give you the best chance to capture him with its five high quality shots per second.

The Santa Stakeout Kit includes all the above gear and more. Items can be purchased individually or as a kit for $6,499 at OpticsPlanet.

After Christmas, the company recommends using the kit for other purposes, like staking out the Tooth Fairy, monsters in closets, annoying sisters and space aliens.