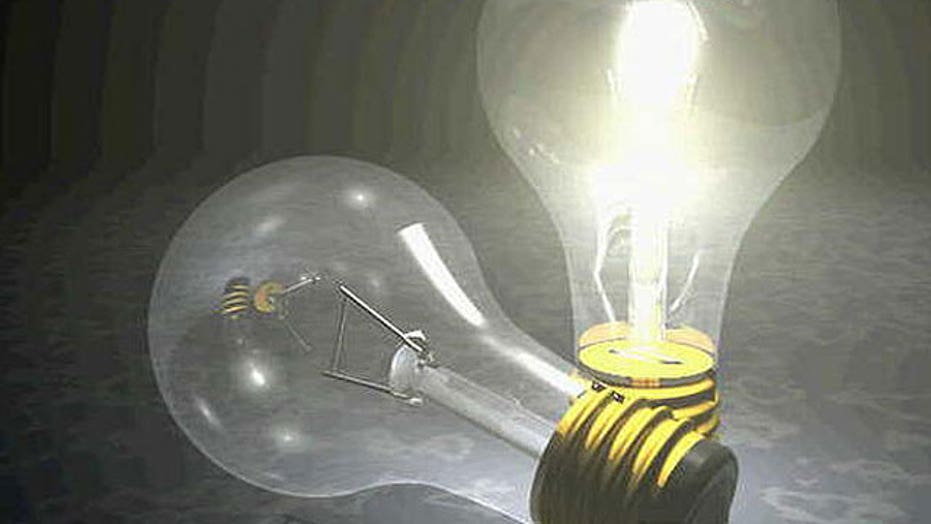 Last incandescent bulbs to be phased out in 2014

It’s lights out for the light bulb.

On Jan. 1 it will become illegal to manufacture or import traditional 60-watt and 40-watt incandescent bulbs, thanks to a 2007 bill that set strict minimum efficiency standards – and effectively outlawed the ordinary bulb.

And like a politician on Election Day, Home Depot is urging consumers to buy early and often.

“Get them while you still can,” the nation’s largest bulb retailer urges on its website. “Stock up on incandescent light bulbs before they are completely discontinued.”

That’s not quite correct. The 2007 law doesn’t mandate that manufacturers discontinue their bulbs, just that they improve them: 40W bulbs must draw just 10.5W, and 60W bulbs 11W. But the result is the same: Incandescents simply can’t keep up with those twisty compact fluorescent (CFL) and newer LED bulbs, and even retailers are buying in bulk as the calendar winds down.

Home Depot has a six-month stockpile, according to Mark Voykovic, the store’s national light bulb merchant.

“Home Depot anticipates running out of their stock of 40W to 60W bulbs six months into 2014,” he told FoxNews.com. And come June, it’s the end of the road. The retail giant said it has made “a concerted effort” to educate employees and customers about the phaseout before then.

While you may have seen people at your local Walmart or Target stockpiling bulbs, cramming their carts with the filament-filled, silver-bottomed beauties, that might not actually reflect a rush on the dying species. Vokovic said October and November traditionally are peak bulb-buying months.

“[There has been an] increase in purchases of incandescent bulbs in the past few months, but there’s always a bump in light bulb purchases over October and November,” he said.

Consumers who are unaware of the coming change may be in for a surprise on Jan. 2. Many people lament the confusing terminology of color temperatures that dictates whether CFLs emit a pale blue (5,000-6,500 Kelvin) or whiter (3,500-4,100K) light, neither of which quite matches the familiar light of an incandescent light bulb (2,700-3,000K). For energy-efficient bulbs to match expectations, they’ll simply have to improve.

Noting the difference in color among CFLs, LEDs and traditional bulbs, savvy interior decorators who prize the warm colors from those old round friends were hoarding as early as two years ago.

“Every time I go to Costco, I buy more wattage,” decorator Bunny Williams told The New York Times in 2011. She said she couldn’t abide the sickly hue of a twisty compact fluorescent, the paper reported.

CFLs, one of the most common energy-efficient replacements for incandescents, have grown in popularity at the same time that colors have improved. LED-based bulbs, including newer models by manufacturers Cree and Philips, are at the forefront of bulb technology’s future.

They’re also a pricey replacement, consumers are finding, despite dramatic price cuts over the past year. Home Depot sells a six pack of 60-Watt incandescents from GE for $4.67, or 78 cents apiece. A six-pack of 60-Watt LEDs from Cree sells for an eye-watering $77.82 -- $12.97 each. The tradeoff is the dramatic drop in power consumption and the much longer lifespan of the newer technologies, which can last up to 15 times longer.

The law was signed by President George W. Bush in 2007, but the end of incandescents became a flashpoint for Republican politicians, notably Rep. Michelle Bachman, R.-Minn., who in 2011 introduced the "Light Bulb Freedom of Choice Act" in an effort to spare the sphere.

That bill went bust, and now the end is nigh.

And while they may not like the light, Americans should appreciate the change in their electric bill, according to the National Electrical Manufacturers Association -- the main trade association for bulb builders.

“NEMA’s members are in the energy efficiency business,” said Phallan Davis, a spokeswoman for NEMA. “Electroindustry products are becoming more and more energy efficient and the systems that often manage their use add to energy and cost savings. NEMA believes that energy efficiency policies, for the residential, commercial, and industrial sectors, should be a central component to any national energy policy,” she told FoxNews.com in an email.