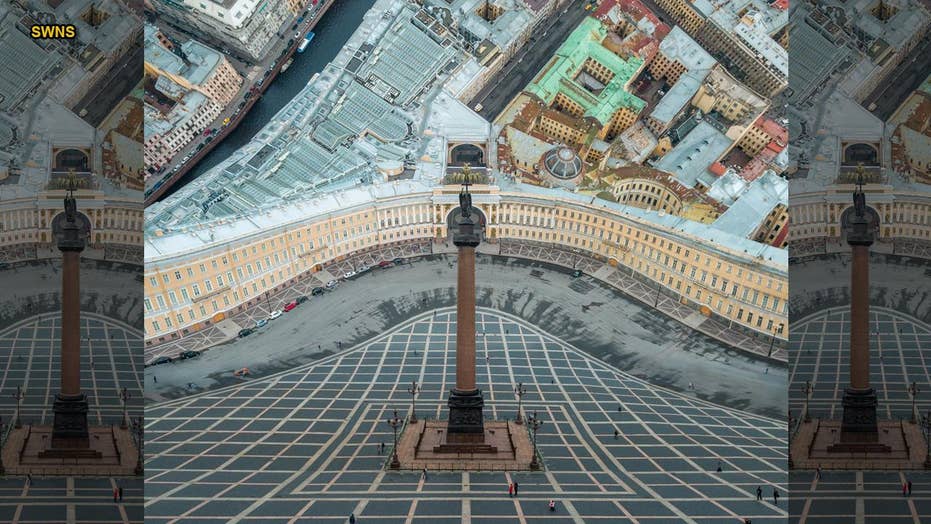 A production company based in Vladimir, Russia called Lestnica had to complete 100 photo shoots and capture over 1,000 photos from a range of different heights to create a series of incredible warped images of Russian cities inspired by the 2010 sci-fi thriller 'Inception.' The images include landmarks such as the Victory Park in Moscow and St. Issac's Cathedral in St. Petesburg, and look as if they were 'folded' and turned in on themselves.

Inspired by the 2010 sci-fi thriller “Inception,” a production company has created a series of incredible warped images of Russian cities.

The stunning images show landmarks such as the Victory Park in Moscow and St. Isaac’s Cathedral in St. Petersburg as if they were “folded” and turned in on themselves.

The remarkable collection of images is the brainchild of video production specialist Lestnica.

An "Inception"-style image of Victory Park in Moscow, Russia. (SWNS/Lestnica)

SWNS reports that photographers had to complete 100 photo shoots and capture over 1,000 photos from a range of different heights to create the images.

“The first time I saw these shots was in the movie 'Inception,'” Artem Prudentov, Lestnica’s founder, told SWNS. "Then I thought it was computer graphics and it was impossible to take the same real shot."

"A little later, my friend Ivan Medvedev sent me pictures that resembled those from the film. He found them on the Internet. I thought it was a 3D model,” Prudentov added. "I said it wasn't possible to take the same real picture of the city. And I repeated it many times. But all this time, I was thinking about how to get a picture like that.”

INSTAGRAM TO USE ARTIFICIAL INTELLIGENCE TO SPOT BULLYING IN PHOTOS

"I started trying. I took pictures, edited them, found mistakes, and corrected them. This cycle was repeated again and again over the next few months," he explained to SWNS.

The surreal images include landmarks such as the Golden Gate a 12th-century landmark in Vladimir, where Lestnica is based. The city is located 120 miles east of Moscow.

SWNS reports that each image took over 12 hours to complete, which helped them "look grand and majestic.”