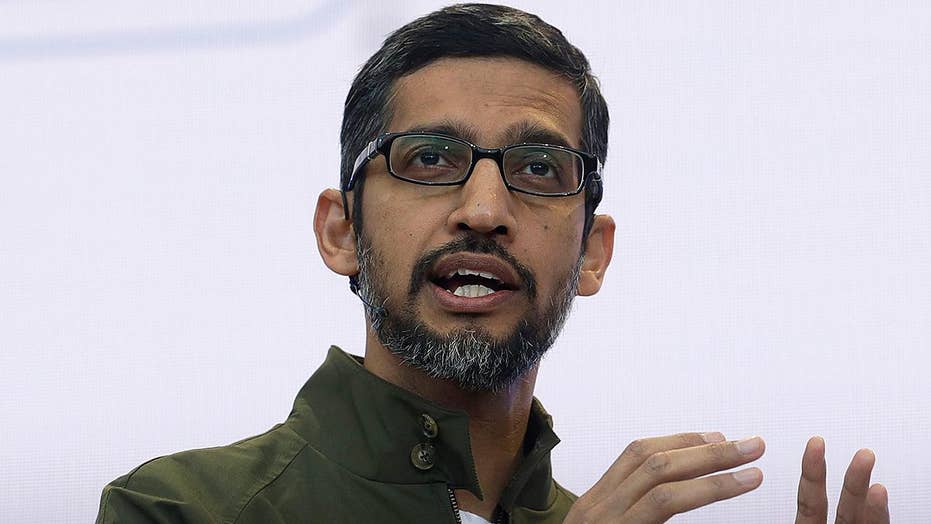 Embattled Google CEO Sundar Pichai, amid allegations of anti-conservative bias and privacy violations on the platform, plans to tell the House Judiciary Committee on Tuesday that his company is no haven for political bias.

"I lead this company without political bias and work to ensure that our products continue to operate that way," Pichai will tell the committee, according to a copy of his prepared remarks. "To do otherwise would go against our core principles and our business interests. We are a company that provides platforms for diverse perspectives and opinions—and we have no shortage of them among our own employees."

“Some of our Googlers are former servicemen and women who have risked much in defense of our country," he added. "Some are civil libertarians who fiercely defend freedom of expression.”

Google has been under close scrutiny amid allegations of anti-conservative bias, which it denies. The CEO met privately with GOP lawmakers on Capitol Hill in September to discuss the allegations and concerns about the firm’s re-entry into China and privacy issues.

"We recognize the important role of governments, including this Committee, in setting rules for the development and use of technology," Pichai will tell the House panel. "To that end, we support federal privacy legislation and proposed a legislative framework for privacy earlier this year."

The comments come as Google tries to manage the protection of personal information on its Plus service, prodding the company to accelerate its plans to shut down a little-used social network created to compete against Facebook.

A privacy flaw that inadvertently exposed the names, email addresses, ages and other personal information of 52.5 million Google Plus users last month convinced Google to close the service in April instead of August, as previously announced. Google revealed the new closure date and its latest privacy lapse in a Monday blog post.

It's the second time in two months that Google has disclosed the existence of a problem that enabled unauthorized access to Plus profiles. In October, the company acknowledged finding a privacy flaw affecting 500,000 Plus users that it waited more than six months to disclose.

As such, the Google chief's appearance on Capitol Hill will be closely followed. For Pichai, Tuesday is a chance to set the record straight.

The 46-year-old chief executive who formerly led Google's product side and oversaw the release of its popular web browser Chrome has maintained a low profile since taking over as the company's leader in October 2015. That stands in contrast to his predecessor, Eric Schmidt, who built relationships in Washington, D.C. on both sides of the aisle and forged a strong bond with the Obama administration.

Pichai has enjoyed a meteoric rise since joining Google in 2004. The future tech leader grew up in a two-room apartment in Chennai, India, where he and his brother slept on the floor. His mother and father, a stenographer and engineer respectively, instilled an appreciation for education in Pichai from an early age.

The CEO touched on his modest upbringing in his written testimony. "Growing up in India, I have distinct memories of when my family got its first phone and our first television. Each new technology made a profound difference in our lives," he explained. "Getting the phone meant that I could call ahead to the hospital to check that the blood results were in before I traveled 2 hours by bus to get them."

Mr. Pichai “came to this country as an immigrant with no resources and rose to lead one of the most powerful and influential companies,” Rep. Ro Khanna, a Democrat whose district in California includes Google’s headquarters of Mountain View, recently told The Wall Street Journal.

“Of course he’s not going to have a network in Washington,” he added. “He hasn’t played the political game. I think that’s refreshing.”

Still, the Journal reported that within Google, Pichai has been trying to build better ties with Republican lawmakers and conservative groups. Pichai himself traveled to Tennessee early this year to attend a groundbreaking of a data center with GOP Sen. Bob Corker.

Tuesday's hearing will test the limits of that outreach and touch upon a range of subjects roiling the company.

Google's plan to create a censored search engine for China will also be firmly in the spotlight.

Known within the tech giant as Dragonfly, the project prompted more than 740 employees to pen a letter calling for Pichai to halt the plan because it would "enable state surveillance." A number of employees have reportedly resigned over the project, which has also drawn bipartisan howls on Capitol Hill at a sensitive time for America's relationship with China, and Google has reportedly clamped down on internal leaks this year.

"It is a coup for the Chinese government and Communist Party to force Google—the biggest search engine in the world—to comply with their onerous censorship requirements, and sets a worrying precedent for other companies seeking to do business in China without compromising their core values," a bipartisan group of senators said in an August letter to Pichai.

At the same time, in the wake of Facebook's known security issues like Cambridge Analytica, Google will be questioned about why it took months for the company to publicly disclose the privacy flaw in its Google+ social network.

Another topic that Republican lawmakers may mention involves a leaked video from an all-hands meeting after the 2016 presidential election that reportedly shows top executives lamenting President Trump's victory. To conservative critics, the video feeds the perception that Google is biased against them. Google has consistently denied any political bias.

The company has also been criticized for moving too slowly, at times, to take down conspiracy-laden or terrorist content from YouTube.

Although Democrats are unlikely to question the CEO about alleged bias, lawmakers may bring up the fact that Google's temps, vendors and contract workers are protesting the fact that they don't receive the same information and benefits as full-time employees.