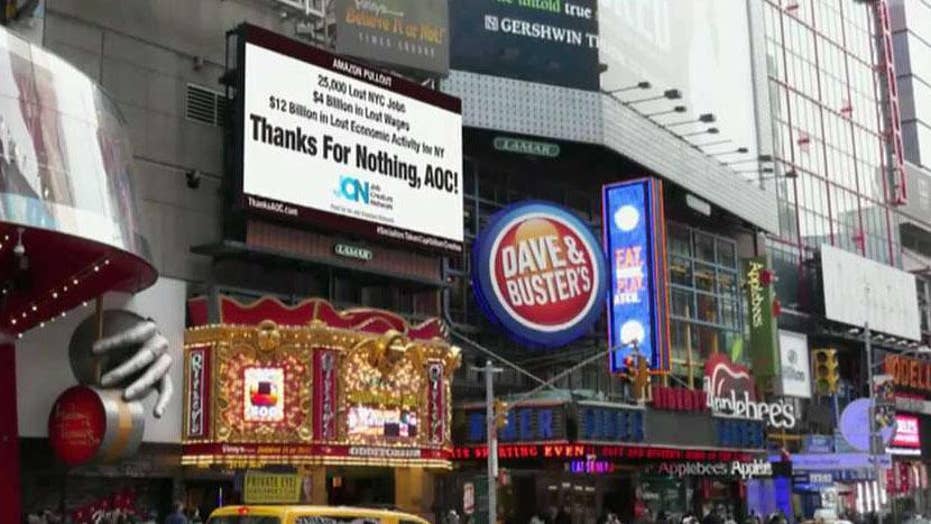 Rep. Alexandria Ocasio-Cortez blasted a Times Square billboard that called out her controversial role in Amazon's decision to abandon a planned HQ2 in New York as "wack" and said it proves the effectiveness of the progressive movement she's become a symbol of.

The freshman Democratic New York congresswoman, who has faced intense criticism for her role in scuttling the planned second headquarters for the tech giant on the waterfront in Queens, said the billboard, which was paid for by Job Creators Network, is funded by billionaires such as the Mercer family.

Ocasio-Cortez tweeted a screen grab of the group's Wikipedia page that says it is funded "mainly by corporate executives and conservative foundations including the Mercer Family Foundation." However, sometime after the congresswoman's tweet was sent early this morning, the organization's Wikipedia page was edited to remove the line about its funding.

After Fox News reached out to the Job Creators Network for comment on Ocasio-Cortez's tweets, the Wikipedia page was subsequently edited again and it now includes the line that was in the New York congresswoman's tweet: "It is funded mainly by corporate executives and conservative foundations including the Mercer Family Foundation."

The Mercer Family Foundation has invested tens of millions of dollars into a range of conservative causes over the last decade and was a financial backer of Donald Trump in the 2016 U.S. presidential campaign. The Job Creators Network, which was founded by Home Depot co-founder and billionaire Bernie Marcus, has reportedly advocated against minimum wage increases, partnered with Newt Gingrich to focus Congress' attention on tax cuts in 2017 and pushed to repeal the Affordable Care Act.

The Job Creators Network provided the following statement to Fox News from Alfredo Ortiz, the group's president and CEO:

"AOC has barely been in elected office and she is already acting like a typical Washington politician by attacking an organization because she can’t defend her position. AOC cost New Yorkers 25,000 jobs and $4 billion in annual wages," Ortiz said in the statement. “Job Creators Network is a national small business advocacy organization that is supported by one of America’s greatest American Dream success stories, Home Depot co-founder Bernie Marcus. Home Depot started as a small business with two stores and today employs more than 400,000 people.”

In announcing its decision to leave New York, Amazon cited the opposition of “a number of state and local politicians.” Ocasio-Cortez, activist groups, and community members pointed to incentives such as $2.5 billion in tax breaks and $500 million in capital grants as a reason for their opposition.

The congresswoman has repeatedly defended her role in Amazon's exit from New York, saying that the deal would have displaced local residents and that the money could have been better spent on the city's infrastructure. New York Gov. Andrew Cuomo and others have criticized the local politicians who opposed the Amazon deal as putting their own interests above regular New Yorkers.

"[A] small group [of] politicians put their own narrow political interests above their community -- which poll after poll showed overwhelmingly supported bringing Amazon to Long Island City -- the state's economic future and the best interests of the people of this state," Cuomo said in a statement last week. "The New York State Senate has done tremendous damage. They should be held accountable for this lost economic opportunity."

Ocasio-Cortez also criticized the choice of Times Square for the billboard in a follow-up tweet, writing: "Billionaires paying to put up anti-progressive propaganda in Times Square is like the obscenely rich version of the scene where Michael Scott points to the Bubba Gump and saying “This is it, this is the heart of civilization, right here.”