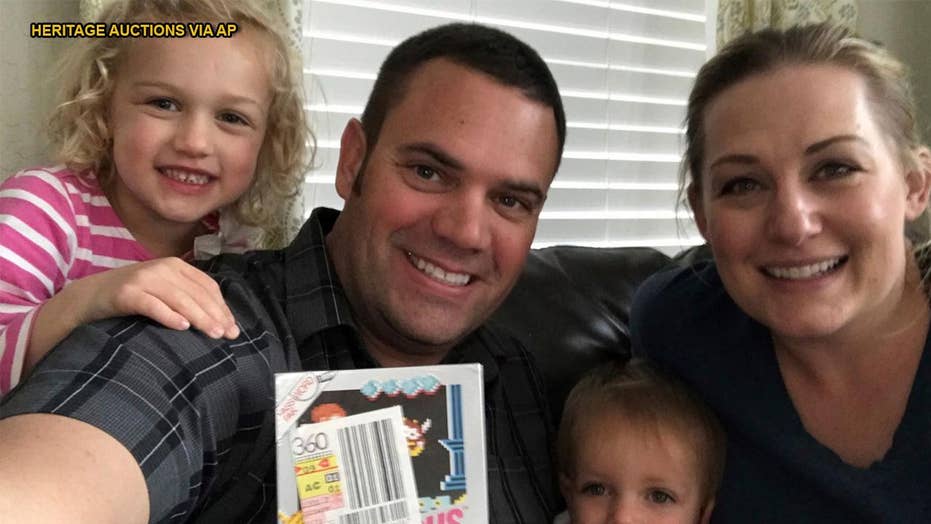 Asked to retrieve boxes from his mother's attic, Scott Amos uncovered an unopened 'Kid Icarus' 1987 Nintendo game inside of an old shopping bag. Originally purchased for $38.45 in 1988, the game is expected to fetch at least $10,000 at auction.

It’s safe to say: great gifts can be found or lost in your attic.

A Nevada man found an unopened copy of "Kid Icarus," a 1987 classic video game, in the attic of his childhood home which experts project to sell for at least $10,000 in an online auction Thursday.

Scott Amos of Reno, Nev., discovered the Nintendo video game after his mother asked him to pick up a few boxes of his childhood collectibles during a visit this past Mother’s Day.

In this June 15, 2019 photo provided by Heritage Auctions, Scott Amos, along with his wife, Kristy, and daughters Grace, left, and Katie, pose in Reno, Nev., with an unopened copy of a 1987 cult-classic video game "Kid Icarus."

Amos found the game cartridge still inside the J.C Penny’s bag, with a receipt for $38.45 attached and a printed Dec. 8, 1988 purchase date. Amos’ mother is unsure why she purchased the game that sat in her attic untouched for over three decades.

“(My mom) thinks she put it there and never got it back out, and then it ended up in the attic,’’ Amos said in an interview with the Reno Gazette Journal.

Amos initially thought the old game might only be worth a couple of hundred dollars, but a few days later, experts told him he could be thousands richer.

“I go to work the next day and emailed a couple of experts, Amos told the newspaper.

“One of them wrote me back within 30 minutes and said, ‘You have an Easter egg'.”

Moments later, he called his wife and told her place the video game in a safe location.

NINTENDO RESPONDS TO TRADE TENSIONS BETWEEN US AND CHINA

Valarie McLeckie, Consignment Director of Video Games at Heritage Auctions, says it’s one of the most difficult Nintendo games to find in good condition.

“To find a sealed copy ‘in the wild,’ so to speak, not to mention one in such a nice condition and one with such transparent provenance, is both an unusual and rather historic occurrence. We feel that the provenance will add a significant premium for serious collectors.”

Amos told the newspaper he plans to go on a family vacation to Disney World next month if the auction goes as expected, and he becomes $10,000 richer.

“Instead of doing something responsible, we’re going to have some fun with it.”