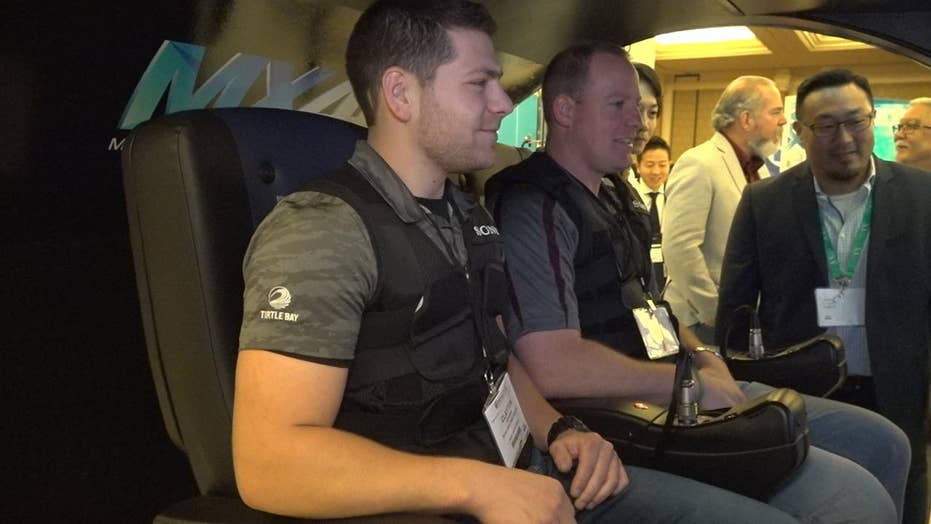 CinemaCon: movie theaters look to tech to keep people at the box office

LAS VEGAS -- Behind many new innovations is a source of disruption.

Before television, stories were told over the airwaves of terrestrial radio and prior to the Internet, people gathered at the local movie theater to catch the latest in entertainment.

Fast-forward to today, and just how television’s emergence in the early 1950s ended up surpassing radio as the medium of choice for consumers, Hollywood is facing a digital revolution of its own that is reshaping the way people choose their content.

“It's not just enough to put a movie on a screen and expect people to go, you have to give people a reason to have a night out,” said Daniel Loria, editorial director for Boxoffice.

At this year’s CinemaCon in Las Vegas, companies like MediaMation underscored the importance of creating an experience for the viewer – showcasing their MX4D technology that makes moviegoers feel like they’re actually in the film.

Pictured is a theater equipped with MX4D full motion cinema chairs that spray water, drop snow from the ceiling and whip the viewer around as if they were in the film. (MX4D/MediaMation)

The full-motion cinema chairs do everything from squirt water to blow wind in your face to tickle your legs, coupled with a new haptics vest that was debuted for the first time to exhibitors this week to add another layer of immersion.

“You're not only watching the movie and getting all the great 4D effects, now you've got all of these other sensors,” Dan Jamele, MediaMation co-founder, told Fox News. “So you're getting the bullet shots into your chest, you're getting the vibration of the motorcycle going through your whole body. You're getting everything right into you.”

Although movie attendance had a record year in 2018, surpassing 1.3 billion tickets sold according to data from the National Association of Theater Owners (NATO), the broader picture still paints an industry in flux as digital-streaming giants like Netflix, Hulu and Amazon keep growing.

“When you have the ability to have that kind of entertainment at home, you have to do something better with the theater," said Robert Laity, Hollywood Esports CEO and one of the owners of the TCL Chinese Theater in Los Angeles, which is equipped with 4D technology.

In 2017, only 1.24 billion tickets were sold – the lowest number since 1993, according to NATO, while tickets prices increased year-over-year.

Cord-cutting is also on the rise – 33 million Americans ditched cable in 2018 – while streaming services like Netflix are producing about 90 original films a year, including documentaries and animated movies, which far exceeds the roughly 30 movies Universal Studios pumps out annually, according to the New York Times.

MediaMation partnered with Sony to create a haptics vest equipped with sensors to add another layer of immersion to the MX4D experience. (Fox News / Ben Brown )

As technology evolves, theaters must adapt in order to remain a destination choice in an era where the Internet has become the cornerstone for the majority of Americans daily routines. Roughly 26 percent of American adults are “almost constantly” online, while 77 percent say they surf the web on a daily basis, according to a 2018 Pew Research Center study.

However, despite all the talk of Netflix and other digital streaming platforms taking down Hollywood, Loria’s outlook for the industry is positive -- noting that while movie attendance might have hit a 24-year low in 2017, it also surged back the following year, with box office numbers topping 11 billion for the past four years in the U.S. and Canada.

“Movie theaters are ahead of that curve, in my opinion, in making sure you have some moviegoer four or five different options on how you want to see that movie,” he said. But he acknowledged that “it’s no longer the one-size-fits-all multiplex cookie cutter model.”

“You're seeing a customizing of the cinema-going experience based on the consumers' expectations and [what they] want to see,” Loria said.

Additionally, a study last year conducted by Ernst & Young found that the relationship between Netflix as well as other digital-streaming services and movie studios is neutral, and perhaps somewhat positive, as those who stream more frequently are also the ones more likely to head to the theater, according to Deadline – which pointed out that NATO commissioned the study.

'GUARDIANS OF THE GALAXY' STAR DAVE BAUTISTA TALKS JAMES GUNN'S RETURN: 'I THOUGHT HE WAS GIVEN A RAW DEAL'

4D technology is highly popular in overseas markets like Asia. But it has been slower to take root in the U.S., which Jeremy Devine, MediaMation vice president of marketing believes is beginning to change.

“I think the biggest hold-up is that United States exhibitors have gone ahead and put in recliners and so on… They did 3D and now they need to do other new formats and they seem committed to that, they just have to take a little breath before they do their next capital improvement or retrofit,” he told Fox News.

According to Jamele, the return rate is “very high” for theaters that have implemented the 4D experience.

“We have a very high occupancy rate hovering us anywhere from two-and-a-half to four times the typical occupancy rate in theaters,” Jamele said. “And on top of that, some of our complexes are doing with our one theater (equipped with 4D), we're doing more than 50 percent of the revenue for the entire complex.”

In addition to offering the typical moviegoer a new experience, Laity is using the technology at the TCL Chinese Theater to tap into a soon-to-be-expected billion-dollar industry – esports.

“Gaming and movies compete in many ways for the same audience,” Laity said. “So, instead of having gamers go one place for their gaming activities and then to the movie theater to watch movies, now you have a single location that can do both for them. Our theaters convert between movie mode showing motion special effects movies, IMAX 4D movies, over to esports mode in about an hour.”

But if getting whipped around, sprayed with water and blasted with different scents associated with what’s going on in the film is not your scene, don’t worry – a small popcorn, soda and a seat that reclines will remain as timeless as some of the Hollywood classics.