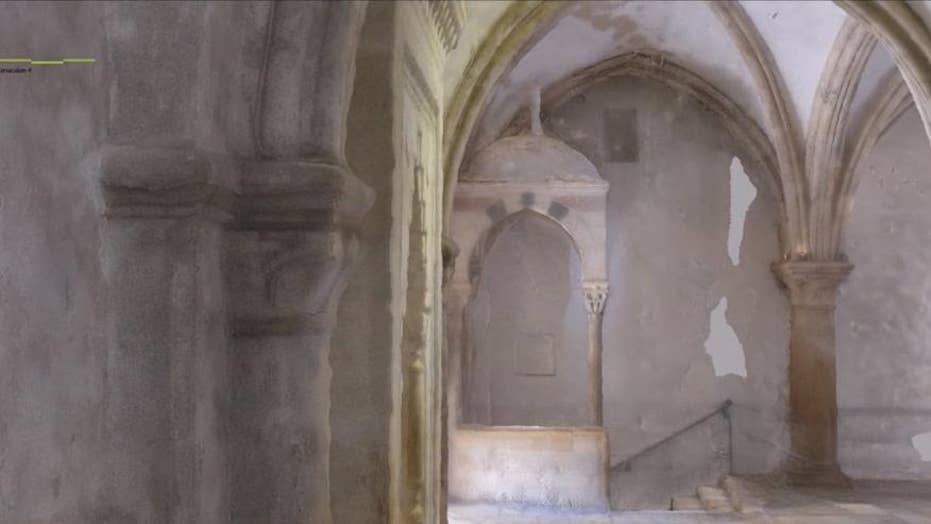 Archaeologists using laser scans have revealed new details of the building venerated as the site of Jesus’ Last Supper.

The room venerated as the site of Jesus’ Last Supper has been revealed in stunning detail thanks to remarkable 3D laser scanning technology.

A Christian holy site, the Cenacle (from the Latin for ‘dining room’), is located on the upper floor of the King David’s Tomb complex on Jerusalem’s Mount Zion.

Archaeologists have harnessed sophisticated 3D mapping equipment to unlock the Cenacle’s secrets. “I felt like I was in the book by Dan Brown, ‘The Da Vinci Code’,” Amit Re’em, Jerusalem district archaeologist for the Israel Antiquities Authority (IAI), told Fox News. “We needed to decipher the ancient symbols.”

Re’em explained that the 3D mapping of the Cenacle and King David’s Tomb is part of an ongoing project that began in 2016. “This place is sacred to three religions – Christianity, Judaism and Islam,” he said. “It’s very, very sensitive – you cannot conduct classic archaeological excavations.”

Keen to find out more about the Cenacle, however, IAI archaeologists teamed up with experts from the Institute for Modern and Contemporary Archaeological Research (INZ) in Austria and the Cyprus Archaeological Institution to conduct 3D laser scans of the room.

“We mapped to reach every corner of this ancient place — we could penetrate the stone and create accurate models of the space,” Re’em said, noting that the team spotted fascinating features within the room.

At the apex of one of the room’s arches, the scans reveal an “Agnus Dei” or “Lamb of God” symbol. On a keystone, a carved lion symbol is also visible. “The lion was the symbol of King David,” Re’em explained. “According to the ancient scriptures, Jesus was a descendant of King David.”

The research provides answers to questions that have swirled around the Cenacle for centuries, such as whether it was built in the 12th, 13th or 14th century. “We think that the date of the building is the second half of the 12th century A.D. during the time of the Crusaders,” Re’em told Fox News. “This was the second stage of a large, magnificent church built by the Crusaders on Mount Zion.”

While the interior of the Cenacle is now relatively unadorned, the 3D mapping project indicates that this was not the case centuries ago. “This part of the Crusader church was a very unique artistic creation,” Re’em said. “Originally, all this part of the Crusader church was fully decorated with architectural symbols — as a Christian pilgrim, you didn’t need to speak Latin, you could ‘read’ the symbols.

Re'em, who worked closely on the project with Ilya Berkovich, a visiting scholar at INZ, said that the elaborate Gothic architecture underlines Jerusalem's importance and its close artistic links with Western Europe. "Jerusalem was at the forefront of the medieval world at the time of the Crusades," he said.

3D laser scanning technology is in the news after a devastating fire tore through the roof of Notre Dame Cathedral and claimed its spire this week.

Research projects, such as a 3D laser mapping of the cathedral by the late art historian Andrew Tallon, have been touted as a useful tool for the rebuilding effort, as well the video game “Assasin’s Creed Unity,” which uses a painstakingly created digital representation of Notre Dame.

“Our work is more than relevant right now after the unfortunate events at the Notre Dame de Paris,” Re’em told Fox News. “If something like this would happen at this holy place in the future, which we hope would not happen, we could use [our 3D mapping project] to reconstruct.”

The expert told Fox News that, while there is no clear archaeological evidence for the Cenacle as the site of Jesus’ last supper, experts will continue their laser scans of the complex. “From time to time, when we have an opportunity, we’re continuing to document other parts of the holy complex,” he said. “I hope that maybe, in the future, we will have the opportunity to conduct a small-scale classical archaeological investigation.”

Other stunning Crusader-era discoveries have been made in Israel in recent years. Last year, for example, archaeologists discovered a Gothic hall at a medieval Crusader fortress in northern Israel. The ceremonial hall found in Galilee's Montfort Castle offers a fascinating glimpse into the turbulent Crusader era in the Holy Land, which began in the 11th century and lasted until the 13th century.

The Cenacle is venerated as the site of Jesus’ Last Supper (Alex Wiegmann, IAI/Sorin Hermon, The Cyprus Institute, Science and Technology for Archaeology Research Center)

In 2017, amazing medieval jewelry was found during the excavation of a Crusader castle on Tittora Hill in the town of Modi’in-Maccabim-Re’ut.

A 3D model of the Cenacle's interior. (Sorin Hermon, The Cyprus Institute, Science and Technology for Archaeology Research Center)