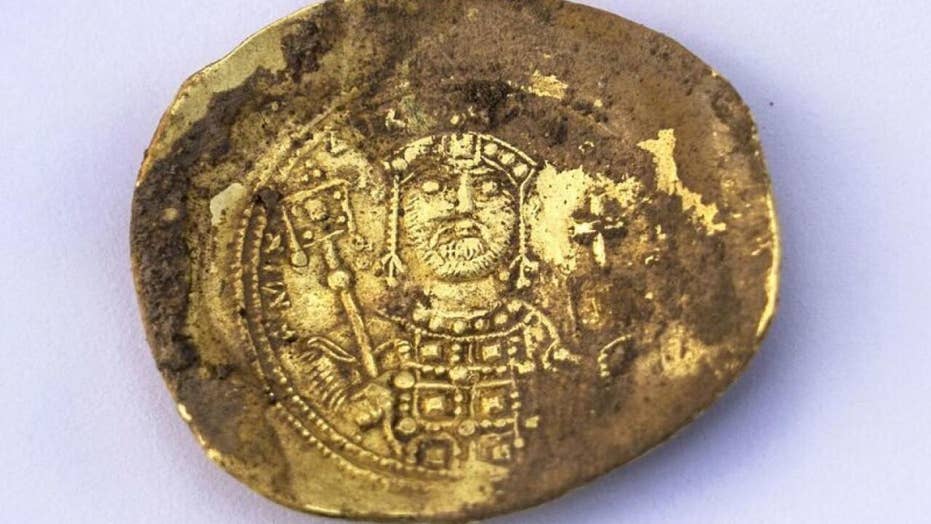 A trove of rare coins and a 900-year-old earring were discovered at the site of a crusader massacre in Israel.

Archaeologists in Israel have uncovered a trove of rare gold coins and a 900-year-old gold earring at the site of a Crusader massacre.

Officials announced the discovery earlier this week, explaining that the artifacts were found at the ancient city of Caesarea on Israel’s coast. A small bronze pot, which contained 24 gold coins and the earring, was found hidden between two stones in the side of a well located in the remains of a 900-year-old house.

“The coins in the cache dating to the end of the eleventh century, make it possible to link the treasure to the Crusader conquest of the city in the year 1101, one of the most dramatic events in the medieval history of the city,” explained excavation directors Dr. Peter Gendelman and Mohammed Hatar of the Israel Antiquities Authority, in a statement.

Citing contemporary sources, the experts noted that most of Caesarea’s inhabitants were massacred by a Crusader army led by King Baldwin I of Jerusalem. “It is reasonable to assume that the treasure’s owner and his family perished in the massacre or were sold into slavery, and therefore were not able to retrieve their gold,” they said in the statement.

The bronze pot with gold earring inside. (Photo: Yaniv Berman, courtesy of the Caesarea Development Corporation)

The stunning artifacts were found in the area of a sacred compound built by King Herod the Great more than two millennia ago. Other treasures have also been found nearby. In the 1960s, for example, a pot containing gold and silver jewelry was discovered at Caesarea, while a collection of bronze vessels was found in the 1990s.

The house where the latest treasures were found was built about 1,000 years after Herod’s reign.

The turbulent Crusader era in the Holy Land began in the 11th century and lasted until the 13th century.

The excavation project at Caesarea is sponsored by the Edmond de Rothschild Foundation and involves the Caesarea Development Corporation, the Israel Nature and Parks Authority, as well as the Israel Antiquities Authority.

The discovery also came just before the Jewish holiday of Hanukkah, when it is traditional to give children “Hanukkah gelt,” which are chocolate coins. “It is symbolic that the gold coins were discovered on the eve of Hanukkah,” said Caesarea Development Corporation CEO Michael Karsenti, in a statement. “For us, this is certainly ‘Hanukah gelt,’ and a testament to how much more is still hidden within Caesarea.”

Israel’s Crusader sites continue to be a source of fascination. In a separate project, for example, archaeologists recently discovered a Gothic hall at a medieval Crusader fortress in northern Israel.

Last year, amazing medieval jewelry was found during the excavation of a Crusader castle on Tittora Hill in the town of Modi’in-Maccabim-Re’ut.