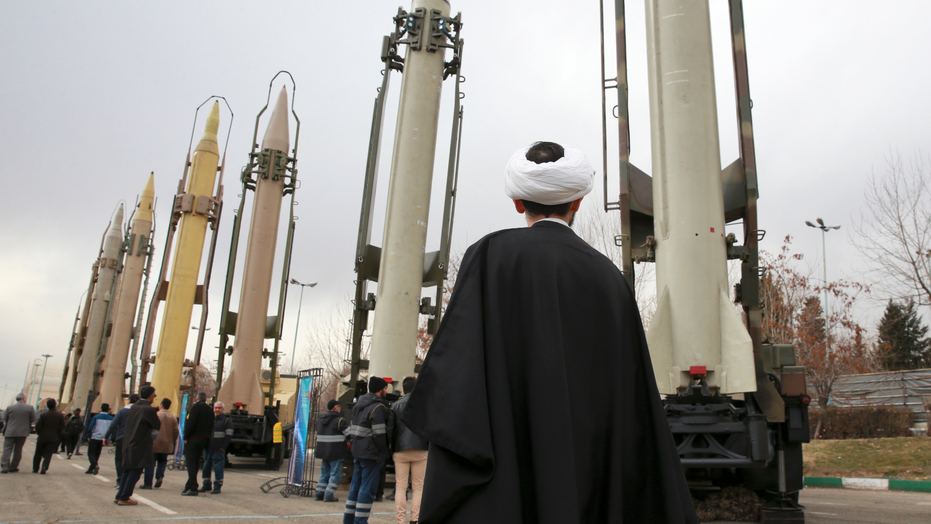 In the hours after Iran is said to have downed a $125 million U.S. surveillance drone over international waters with a surface-to-air missile, despite Tehran’s vehement denials, President Trump gave the green light to retaliatory military strikes before later ordering a halt amid the alarming spike in tensions.

The inflammatory incident – which comes on the heels of escalating rhetoric between Washington and Tehran and other apparent sabotage vessel attacks – has many U.S. lawmakers and officials still fearing that some form of a military confrontation may be inevitable. But just how capable is Iran when it comes to fighting back and what lurks inside the country's shadowy arms arsenal and how is the Iranian military structured?

“Iran has two military institutions. First is the Artesh, or the regular armed forces – Army, Navy, Air – and then there's the Revolutionary Guard or IRGC with its own separate chain of command and force structure. Most of the subterfuge and malicious activities in the Middle East that can be attributed to Iranian actors is the work of the IRGC,” Miguel Miranda, an expert analyst in military technology in Asia, told Fox News. “Now Iran has a colorful arsenal and much of it is obviously dated but still functional. Old CH-47 Chinook helicopters and M60 Patton tanks immediately come to mind – this is what the Artesh are stuck with.”

But, he cautioned, since the 1990’s Iran's state-owned military-industrial sector has made steady progress in four particular areas and is now a “regional leader” alongside Israel and Turkey when it comes to unmanned systems, small arms and light weapons, artillery, and ballistic missiles and other guided munitions.

“Iran has demonstrated it can launch dozens of road-mobile short-range ballistic missiles at targets beyond its borders. Recent innovations include a cruise missile likely patterned on a Soviet design with a range exceeding 1200 miles,” Miranda continued. “Iran’s missile technology and ability to manufacture these is far more advanced than any Arab state. Iran can mass produce short, medium, and long-range anti-aircraft missiles based on-reversed engineered Chinese, Russian and U.S. models.”

A Ghader missile is launched from the area near the Iranian port of Jask port on the shore of the Gulf of Oman during an Iranian navy drill, Tuesday, Jan. 1, 2013. Iran says it has tested advanced anti-ship missiles in the final day of a naval drill near the strategic Strait of Hormuz, the passageway for one-fifth of the world's oil supply. State TV says "Ghader", or "Capable", a missile with a range of 200 kilometers (120 miles), was among the weapons used Tuesday. It says the weapon can destroy warships. (AP Photo/Jamejam Online, Azin Haghighi) (AP2013)

While Iran has been a party to the Treaty on the Non-Proliferation of Nuclear Weapons (NPT) for almost four decades, it is not a member of the Missile Technology Control Regime (MTCR) nor The Hague Code of Conduct against Ballistic Missile Proliferation.

Since the 1979 revolution and imposition of hefty western sanctions, coupled with the devastating 1980’s war with bordering Iraq, Iran has been battling a feeble economy and tight restrictions when it comes to easily advancing its weapons cache the way most others in the region have been able to do. Thus, much of the Iranian depository is said to be locally made, with abundant government funding to spend on everything from importing tools and parts to developing factories – with a little help from the outside.

According to John Wood, analyst and author of “Russia, the Asymmetric Threat to the United States,” Iran acquires majority of its equipment and expertise from Russia and China, along with “acquiring technology through the black market, especially from Eastern Europe and North Korea, as well as through clandestine operations in Western Europe.”

While the UN conventional arms embargo has somewhat helped limit what Iran can access abroad through official channels, it expires in October 2020 – rendering an open question as to whether Iran can then purchase more state-of-the-art weaponry from a broader array of players.

In this image posted on the official Twitter account of the Saudi Press agency, SPA, Tuesday, Sept. 30, 2015, confiscated weapons are seen aboard an Iranian fishing boat bound for Yemen. The Saudi-led coalition battling Yemen's Shiite rebels says it has foiled an attempt by Iran to smuggle missiles and other weapons to the rebels aboard a fishing boat. The coalition says in a statement released Wednesday that the seizure took place on Saturday some 241 kilometers (150 miles) southeast of the Omani port of Salalah. (Saudi Press Agency via AP) (The Associated Press)

Miranda underscored that Iranian drones are “another success story” and they boast having all types from handheld prop-driven spy planes to long-endurance models that carry bombs on their wings to the notorious Saeqeh that comes with a “jet-powered UAV able to launch munitions.”

And then there is a covert action routinely employed to mimic the inventions of its enemies – in particular, Miranda surmised, is that the losses of U.S drones throughout the protracted war in Afghanistan have aided Iran in the way of acquiring the damaged models and enable them to analyze them for reverse engineering.

“Iran will use militias, cells, and spies, in Shia communities throughout the region to conduct sabotage, especially of the energy complex, kidnapping of Westerners and attacks on the US and its allies,” Wood told Fox News, via email. “Over the decades, Iran has developed an extensive and robust military-industrial complex – they also have chemical and biological weapons.”

Yet the breadth and condition of its chemical and biological capabilities – despite having ratified the Biological and Toxin Weapons Convention (BTWC) in 1973 – is not completely clear.

Moreover, Jonathan Ruhe, associate director of the Jewish Institute for National Security of America’s (JINSA) Gemunder Center for Defense & Strategy, concurred that while Iran lacks the modernity of neighboring countries, it has sought not to match its stockpile with big players like the United States, but has instead become particularly skilled at “using basic capabilities in sophisticated ways to target U.S. and allies’ vulnerabilities, like overwhelming naval and air defenses with lots of attack craft, missiles and drones.”

“Ironically as we’re seeing now, as we saw in the 1980s, Iran’s use of simple naval mines in vital shipping lanes can do a lot in terms of escalating tension with the United States,” he explained. “Decades of sanctions have forced Iran to develop a sizable domestic arms industry. These are not latest-generation capabilities, and they wouldn’t defeat the U.S. in a major head-on conflict. But they are good enough, and Iran has enough of them to make it difficult for the U.S. and allied forces.”

Last year, Trump controversially pulled out of the 2015 nuclear agreement with Iran, re-imposing grueling economic sanctions and applying what experts have coined a “maximum pressure” campaign on Tehran’s regime.

Meanwhile, Iran has for weeks warned it will ignite a treacherous chapter in its dispute with the West next week, threatening to dump aspects of the fragile nuclear deal and resume stockpiling unless European signatories to the deal can get around the crippling U.S. sanctions.

“Iran has significant manpower and a network of proxies and partners around the region that could be activated to deter direct attacks on Iranian soil,” added Ali Vaez, Director of the Iran Project, via email. “It would be a mistake to think that an escalation between Iran and the U.S. will be a quick, cheap or easy military operation. It could well lead to a major confrontation involving major losses in blood and treasure on both sides, and even a wider regional war involving their respective allies.”