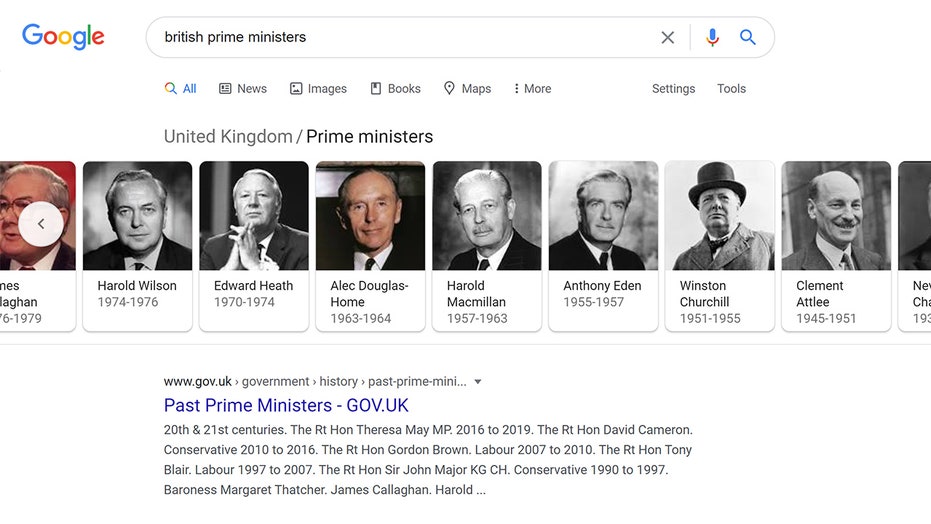 Images of Winston Churchill failed to appear Sunday during Google searches for the former British prime minister—but the tech giant says it was not on purpose.

Google blamed a glitch and said it was only temporary.

Then a Google search for British Prime Ministers showed a gray generic avatar instead of his picture alongside other former U.K. prime ministers.

LONDON STATUE OF WINSTON CHURCHILL VANDALIZED ON D-DAY AMID PROTESTS

"We're aware an image for Sir Winston Churchill is missing from his Knowledge Graph entry on Google," the company said, according to reports. "This was not purposeful and will be resolved. Images in such panels are automatically created & updated. During an update, they can briefly disappear.”

Even after it was supposedly resolved a search of British Prime Ministers failed to show Churchill was prime minister from 1940 to 1945.

“We’re exploring why the first terms for Churchill, Wilson, MacDonald & Baldwin are not shown,” Google said. “It might be that our systems are only displaying the last term of prime ministers who had non-consecutive terms. We’ll seek to address this to avoid any unintentional concern.”

Social media users theorized the Churchill photo disappearance had something to do with what happened to a Churchill statue in London’s Parliament, Newsweek reported.

A protective covering installed overnight surrounds the statue of former British Prime Minister Sir Winston Churchill in Parliament Square, London, Friday, June 12, 2020, following Black Lives Matter protests that took place across the UK over the weekend. The protests were ignited by the death of George Floyd, who died after he was restrained by Minneapolis police on May 25. (Aaron Chown/PA via AP)

The statue was boarded up for a Black Lives Matter protest Friday after it was vandalized days before during another protest over the death of George Floyd in police custody.

Vandals scrawled "is a racist" on the monument, shocking Churchill’s granddaughter Emma Soames, according to the BBC.

She was quoted as saying it was "extraordinarily sad that my grandfather, who was such a unifying figure in this country, appears to have become a sort of icon through being controversial."

"We've come to this place where history is viewed only entirely through the prism of the present," she told the BBC.