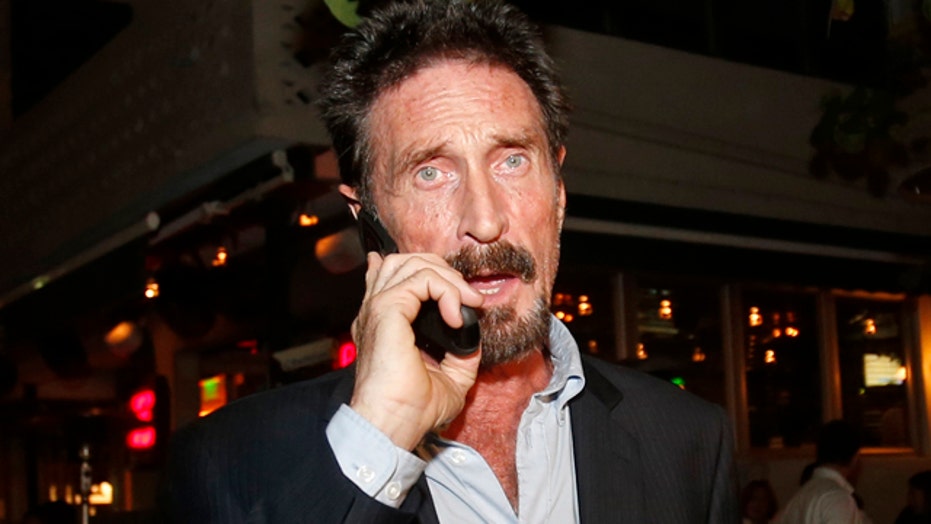 Anti-virus software founder arrives in US from Guatemala

GUATEMALA CITY – Anti-virus software founder John McAfee's return to the United States marked the latest chapter in a strange, monthlong odyssey to avoid police questioning about a killing in the Central American country of Belize.

The 67-year-old British native was holed up in a hotel in Miami's swank South Beach neighborhood after arriving Wednesday night on a flight from Guatemala, which deported him after he snuck in illegally from Belize. Police there want to question him in connection with the death of a U.S. expatriate who lived near him on an island off Belize's coast.

McAfee says he did not kill the neighbor and feared his own life would be in danger if he turned himself in to Belizean authorities. He has not been charged with any crime, and it was unclear whether U.S. authorities had any interest in questioning him.

He was in hiding in Belize for weeks after police pronounced him a person of interest in the killing. Belizean authorities have urged him to show up for questioning but have not lodged any formal charges against him.

Belize's prime minister, Dean Barrow, has expressed doubts about McAfee's mental state, saying: "I don't want to be unkind to the gentleman, but I believe he is extremely paranoid, even bonkers."

On his website Wednesday night, McAfee said he was escorted by a group of federal agents to an airport taxi stand, where he caught a cab to the hotel.

An FBI spokesman in Miami, James Marshall, told The Associated Press in an email that the agency was not involved with McAfee's return to the U.S.

Authorities from U.S. Customs and Border Protection, Immigration and Customs Enforcement, the U.S. Marshals office and the U.S. attorney's office did not immediately respond to questions Wednesday about whether McAfee would be questioned or detained in the U.S. They said there was no active arrest warrant for McAfee that would justify taking him into custody.

Reached by telephone at his hotel, McAfee told an AP reporter he couldn't talk because he was waiting for a call from his girlfriend, 20-year-old Belizean Samantha Vanegas. Vanegas had accompanied him when he was on the run, but did not go with him to the U.S.

McAfee sat in a coach-class seat on an American Airlines flight from Guatemala City, according to the airline.

Other passengers on the flight told the AP that McAfee was escorted off the aircraft before they were allowed to disembark.

"They asked us to please stay seated and said, `Mr. John McAfee, come to the front,' and he did," said Maria Claridge, a 36-year-old photographer. "He walked very peacefully, chin up. He didn't seem stressed."

"I thought he was either a diplomat or a politician," she said. "It just seemed eerie to be traveling on an airplane with someone who was in trouble."

In Guatemala on Sunday, McAfee said he wanted to return to the United States and "settle down to whatever normal life" he can. "I simply would like to live comfortably day by day, fish, swim, enjoy my declining years."

He later said he also would be happy to go to England, noting, "I have dual citizenship."

McAfee has tried to avoid police questioning about the November killing of American expatriate Gregory Viant Faull, who lived a couple of houses down from McAfee's compound on Ambergris Caye, off Belize's Caribbean coast.

McAfee has acknowledged that his dogs were bothersome and that Faull had complained about them days before some of the dogs were poisoned, but denies killing Faull.

McAfee has led an eccentric life since he sold his stake in the software company named after him in the early 1990s and moved to Belize about three years ago to lower his taxes.

He told The New York Times in 2009 that he had lost all but $4 million of his $100 million fortune in the U.S. financial crisis. However, a story on the Gizmodo website quoted him as describing that claim as "not very accurate at all."