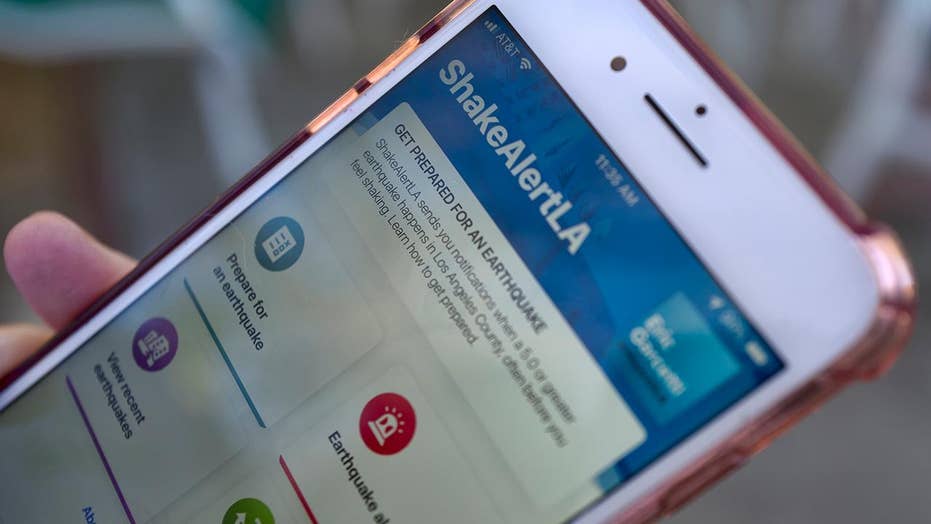 Before the ground shakes beneath their feet, residents in the nation's second-largest city are now able to brace seconds ahead of time after officials launched the country's first earthquake early warning app on Thursday.

The ShakeAlertLA app is designed to send a warning to anyone who has downloaded it and is within Los Angeles County when regional sensors placed by the U.S. Geological Survey detect that an earthquake of magnitude 5.0 or greater is striking.

"We often say here in Los Angeles that it's not a question of if, it's a question of when the next big one is going to hit," Los Angeles Mayor Eric Garcetti said at a news conference on Thursday. "We know that we live in earthquake country."

THE MASSIVE 2017 MEXICAN EARTHQUAKE SPLIT A TECTONIC PLATE IN TWO, AND GEOLOGISTS ARE SHAKEN

The app launched on the Apple and Google Play stores on Dec. 31, 2018, after more than a decade of research and development led by the United States Geological Survey.

Screenshots show how alert messages are displayed on the ShakeAlertLA app.

In addition to providing quake alerts, the app also includes tips on preparing for and recovering from a quake.

ShakeAlertLA also includes a listing and map of recent quakes, according to FOX11.

ALASKA'S DEADLIEST EARTHQUAKES THROUGHOUT THE YEARS

Garcetti's office said that ShakeAlertLA pilot project was made possible by a $260,000 grant from The Annenberg Foundation in 2017.

The ShakeAlertLA app sends alerts when sensors detect an earthquake of magnitude 5.0 or higher in the Los Angeles area. (FOX11)

While the app is being declared a breakthrough by officials, it does have some limitations.

The L.A.-based pilot has been called a "crucial step" towards the development of an earthquake early warning network across California, and eventually the entire West Coast.