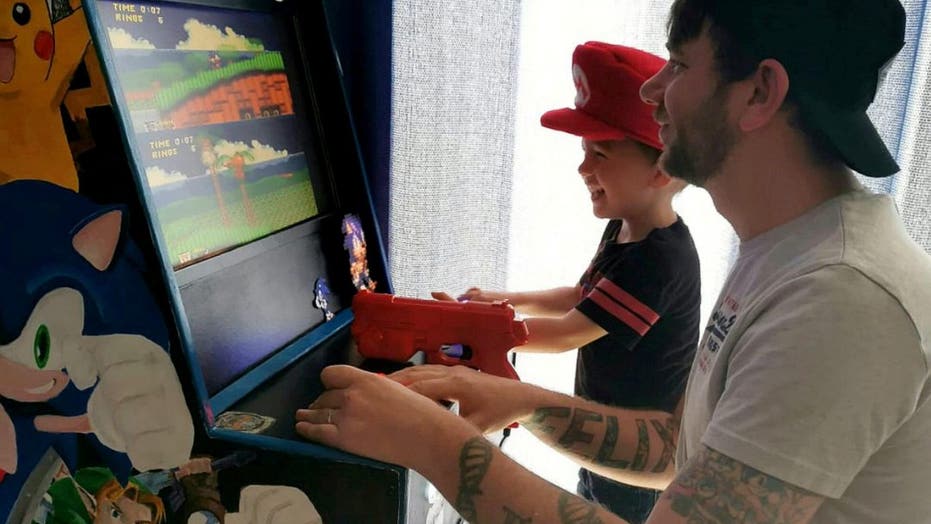 While abiding by stay-at-home orders around the world due to the coronavirus pandemic, many people have gotten creative with their spare time, including one family that made dinosaur rock art.

One father, however, has gone above and beyond, creating a retro video game arcade for his 3-year-old-son.

Steve Addison, of Lincoln, England, used an old Atari computer, in addition to arcade buttons, wood and a used Raspberry Pi computer he bought from eBay to build the arcade that can play games like "Super Mario," "Spyro," "Crash Bandicoot" and "Sonic the Hedgehog," British news agency SWNS reports.

Steve Addison, who works as an assistant manager at McDonalds, found himself at a loose end after being put on furlough leave. But rather than stew around the house all day, the 32-year-old decided to finish off a plan to dig out an Atari he got as a Christmas gift and create a cabinet so he and three-year-old son Felix could play on it. (Credit: SWNS)

“I knew it was inevitable that we were going into lockdown so I made a start just before self-isolation rules fully kicked in," Addison, 32, said. “I got an Atari from my mother in law for Christmas but I had no slot for it with everything else we have hooked up to the TV."

Despite having little-to-no knowhow, Addison was able to spend less than $200 for the two-player machine for him and his son, Felix.

“I've always kind of wanted an arcade machine and I suggested the idea to my wife who kind of laughed me out the room," Addison explained. “My capabilities of when it came to DIY were little to none so she thought something bad would go wrong, cutting off my finger or something. It got to the start of March and I just wanted a little project to keep my mind focused on something and keep me busy as I knew work would be shut."

New arcade machines can vary in price but can reach upward of $3,000, based on the price of similar systems.

The father of one was furloughed from his job as an assistant manager at McDonald's after his restaurant was forced to close due to the pandemic.

Included in the 500 games on the video game arcade machine are classics such as "Pac-Man," "Pong" and "Tetris," as well as "Street Fighter" and "Mortal Kombat."

The emulator does have some educational games for Felix, such as "Sesame Street" and "Winnie the Pooh," but Steve noted that his son has fallen in love with some of his old favorites.

“Spyro, Crash Bandicoot and Sonic the Hedgehog he loves, which is one of my childhood heroes, so it's nice to see that my son now enjoys it as well," Addison said. (Credit: SWNS)

“Spyro, Crash Bandicoot and Sonic the Hedgehog he loves, which is one of my childhood heroes, so it's nice to see that my son now enjoys it as well," he said.

Felix even helped choose some of the characters on the outside of the machine, Addison quipped.

Addison said the project took about two weeks to plan the machine and a week to build it. Since then, he and Felix have enjoyed the labor of love immensely.

“It was a slow process at the start as I was still at work but when we went into a lockdown that's when I got it all finished off," he said. “The little man and I have been on [it] pretty much every day since.”

Steve said he's gotten offers from friends to build a system for them, which he said he's happy to do.

“When work reopens, I'm going to put it into my staff room for my colleagues to play on their breaks," he said. “I loved doing it and sharing it with everyone. It was nice to see people's reactions when it was online and it just made me feel really proud.”

As of Thursday afternoon, more than 3.2 million coronavirus cases have been diagnosed worldwide, more than 1 million of which are in the U.S., the most impacted country on the planet.