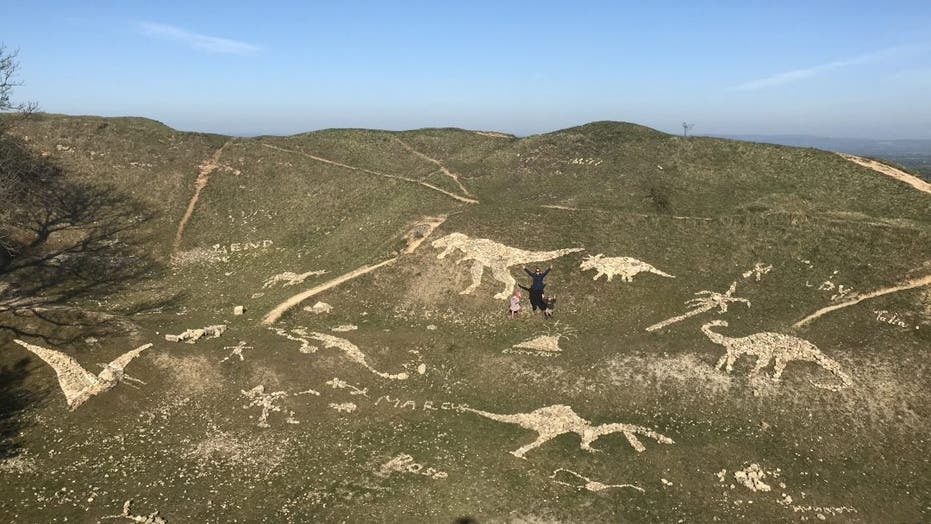 It's an art show 65-million-years in the making.

The coronavirus pandemic has resulted in social distancing measures in nearly every part of the world, causing people to look for new and unusual forms of enjoyment. One family has taken their time in isolation to new heights, creating dinosaurs made out of rocks from an abandoned quarry, British news agency SWNS reports.

The Booker family — James, Emily and their two children, Thomas and Olivia — have created several rock portraits, including a Tyrannosaurus rex, triceratops and a velociraptor, near an old quarry in Stroud, Gloucestershire, England. The Bookers initially created the designs as a way of saying thank you to the health workers who aided with Thomas' epilepsy.

The Booker family have been spending their time in isolation creating amazing dinosaur designs - using loose rocks in a disused quarry near Stroud, Gloucestershire. (Credit: SWNS)

"It's something to give back for all the care and generosity Thomas had," 42-year-old James said. "The nurses that he had in hospital were fantastic - they bent over backwards to make sure he was never bored."

The idea was born when James took the children to the quarry.

"We went to the quarry and just started building structures out of rocks," James added. "I was with the kids and did an outline of Thomas. He wanted to be holding some sticks, or a bow and arrow. I said: 'What about a Velociraptor chasing you?'. So I spent a couple of trips up doing that and refining it."

James said the other dinosaurs came as Emily, 35, dealt with the children.

"She was using that time constructively and creatively with Thomas and Olivia, doing bug hunting, fossil collecting and nature discussions," he explained. "But after a while she got bored of me going back and forth so she said: 'Why don't you do something epic?'"

The impressive gallery was produced using random pieces of stone and is meant as a thank you to health workers who helped the family deal with Thomas' epilepsy. A T. rex, a Triceratops and a Velociraptor are among the designs laid out by the Bookers at the spot near Stroud, Glos. (Credit: SWNS)

The largest structure, which is Thomas' favorite, is the T. rex, which measures approximately 20 feet long.

Even amid social distancing, James said it's become a conversation starter with other people, some of whom have filled in the outlines.

"I thought: 'If it's making people stop and giving them happiness, what's next?' It's been a conversation starter with random people - even with social distancing," he continued. "I don't know anyone who doesn't like dinosaurs."

Dinosaurs were wiped out 65 million years ago by an asteroid that hit Earth in what is now the Yucatan Peninsula in Mexico, along with nearly 75 percent of all species on the planet.